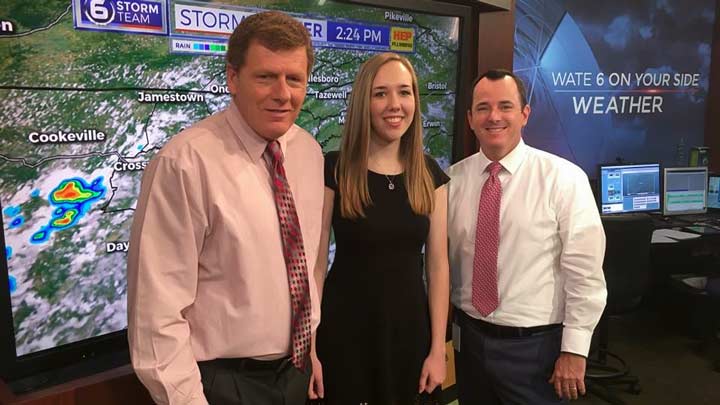 An exciting, stormy first day and the opportunity to be on-air twice were highlights of a University of Alabama in Huntsville (UAH) Earth System Science major’s summer weather internship at a Tennessee television station.

A native of Knoxville, junior Vivian Brasfield interned at WATE 6 On Your Side in Knoxville. Her UAH studies are concentrated in Atmospheric Science.

"At WATE, I worked mainly with Chief Meteorologist Matt Hinkin, who has been at this station for 30 years. I also worked closely with meteorologist Ken Weathers and occasionally collaborated with the weekend meteorologist, Shea Sorenson," Brasfield says. "My main role was to help in the preparation for each evening broadcast."

When there is a severe weather threat the meteorologists either go live on Facebook or cut into normal broadcasting to make sure everyone is aware and stays safe, Brasfield says.

"This was actually the case on my very first day. As I walked in Ken and Trent Magill, the morning show meteorologist, were wrapping up a Facebook live report on several severe thunderstorms within the viewing area," she says.

"There were several other times during my internship that they had to go live in order to let people know of an imminent threat, and invariably there would be viewers emailing in their frustration about missing their shows because of reports on severe weather that was not affecting them," Brasfield says. "Matt and Ken would always tell me that it is their No. 1 job to keep people safe, and if they save just one life by cutting into regular programming, their job will be done."

Brasfield also made it on-air twice.

"The first time, I helped Matt with one of his segments outside of the studio, demonstrating the drastic difference in temperatures of pavement in the sun and in the shade using a temperature gun," she says. "He even introduced me as their weather intern and gave UAH a shout-out!"

During the last week of her internship, she was the subject of an Ask the Storm Team segment about her work on an average internship day.

"It was very cool, but also strange to see myself on TV," she says. "They aired it on my last day and even got a shot of me watching myself on air."

Her summer duties included updating the weather graphics for each day's forecast, attending the daily staff briefing to observe a preview presentation of the weather for that night's broadcast to the directors, producers and anchors, and inputting closed captioning for the newscast.

"Unlike the anchors, the broadcast meteorologists do not read from a script, but there still needs to be some sort of captioning on the screen during the weather for those hearing-impaired people who are watching," Brasfield says. "That was often the biggest help to them since it is so time consuming and they have so many other things to do before the broadcast begins at 4 p.m."

On a slow weather day, she was given the opportunity to prepare her own forecast show and practice it in front of the green wall on which maps and images are superimposed.

"It is so much harder than it looks and I gained a lot of respect for broadcast meteorologists through that," Brasfield says. "For one thing, everything is backwards as if you’re forecasting into a mirror, and for another, you have to keep it under 3 minutes and sometimes even 1:15, which was pretty hard for me, especially since I was nervous."

She gained an appreciation for the difference between broadcast meteorology and simply forecasting and reporting the weather.

"In broadcasts, you need to keep the viewer's attention. Matt and Ken were always answering the question, ‘What is the weather story for today?’ For TV, the weather needs to tell a story and be interesting or people will listen but not hear what the broadcast meteorologists are saying," Brasfield says.

"This involves aspects as small as varying which graphics you use or how you describe the weather. Over this past summer, I learned that there are over 10 ways to say that there is a chance of scattered thunderstorms that day. If you're too repetitive, people will become bored. When most people watch the weather they just want to know if they need to take a jacket or an umbrella to work the next day."

She says the prospect of being able to directly protect and inform people about dangerous weather is attractive about broadcast meteorology.

"Broadcast meteorologists are effectively the first line of defense against severe weather. When you see it getting cloudy outside or hear thunder, most people's first instinct is to turn on the TV and check the weather," Brasfield says. "Being able to interact and educate others about weather as well as keep them safe during danger is what I think I would enjoy the most about being a broadcast meteorologist."

If she doesn’t pursue that field, she aims to work for the National Weather Service in forecasting, work for a private weather company or become involved in hurricane research.

"Hurricanes are my favorite weather phenomenon to study," she says. "I'm not entirely sure of what the future holds for me, but I do know that I love studying the weather and how intricate and dynamic it is."

Finding the internship was as easy as checking WATE's website. A few weeks after sending in her resume and cover letter, she received an email from station offering her a non-college credit job shadow opportunity with the weather team, since her major does not require a credit-bearing internship.

"Because of this, there was no formal interview, but I did get into contact with Ken Weathers and we worked everything out over the phone. They were very accommodating and eager to help me in any way!" she says.

"I'd like to brag about how wonderful Matt, Ken and Shea were to me over the summer. They were so eager to help me and teach me about their job, giving me tips and advice I can use even if I don't go into broadcast meteorology," Brasfield says. "I felt so honored to be able to learn from two men who had 30 and 17 years of experience in broadcast meteorology and see how they have adapted their delivery to the new age of technology and social media. The time that they gave and expertise they showed me is so appreciated and much more than I ever expected."