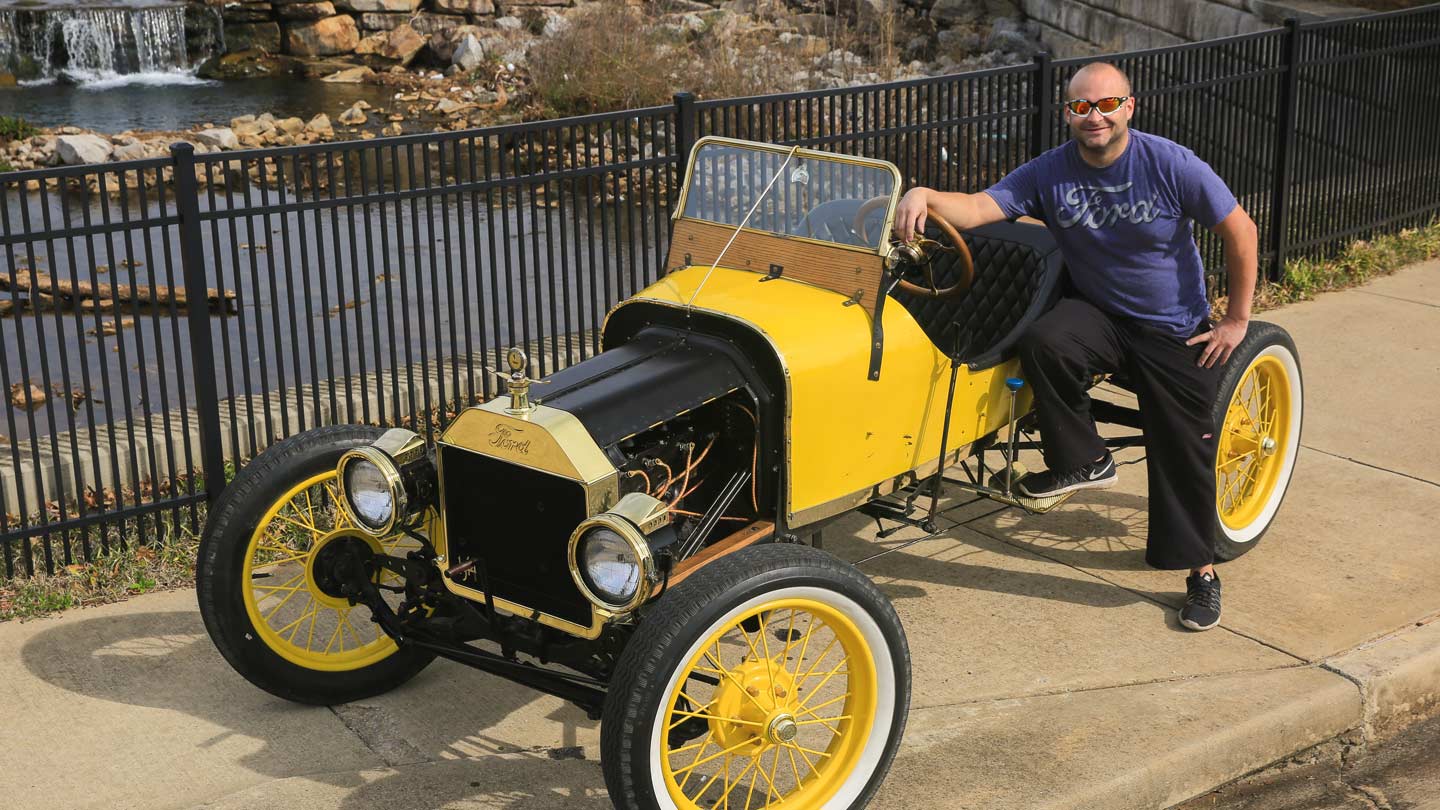 Seth Spratlin beside the 1914 Model T Ford originally bought by his great-great-grandfather.

That’s why it’s so very hard to miss Seth Spratlin on the days he parks his modified 1914 Model T speedster in the lot near Olin B. King Technology Hall on The University of Alabama in Huntsville (UAH) campus. This T is no trailer queen. It gets driven.

"My dad is a Marine so I grew up a military brat. Home is anywhere I've been for more than a few weeks. I've lived all over the U.S., but Athens/Winterville, Ga., is home," Spratlin says. He graduated high school in 2004 and got a business management degree from the University of South Carolina Beaufort in 2008, then worked as an aviation logistics contractor for the U.S. Navy and Marine Corps.

"We thought maybe my dad was going to get stationed at the Arsenal, so I looked at Huntsville and UAH and decided I'd get my mechanical engineering degree here," Spratlin says. "My dad ended up stationed at the Pentagon but I had already decided I liked the town and the school here. I've been at UAH since fall of 2015, and I'm basically a junior."

He’d like to work in automotive, aviation and space-related design, with the goal of becoming a project manager.

"I really like 3D printing, especially with metal, and have gotten more and more sucked into fluid mechanics as I've taken classes here," he says.

A Ford affinity runs through his family. While in high school his father owned a 1967 Mustang GT fastback with a 390 engine. "That has been my dream car since I was about 12," he says. "We are both gear heads."

But the legacy of the yellow Model T runs much farther back than that.

"My family is all from Winterville, Ga., which is a tiny town just east of Athens," Spratlin says. "In 1914, a doctor from a town nearby was on a trip and bought the T brand new as a touring car from a dealer in Virginia."

Maybe due to galvanic action, on the drive back to Georgia the aluminum fenders and steel bolts corroded and as a result, the fenders fell off. 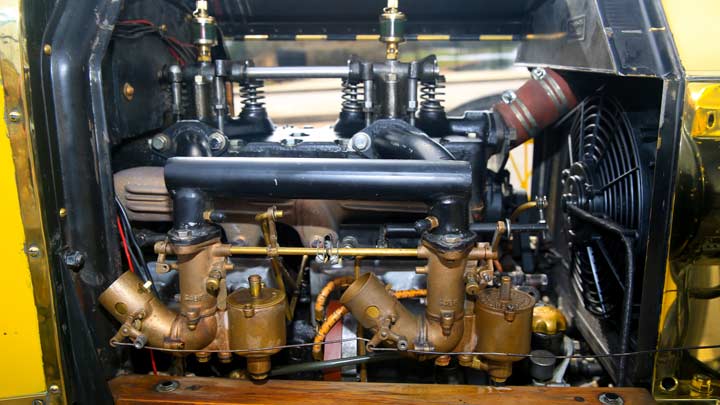 "He sold the car in disgust – with just a couple hundred miles on it – to my great-great-grandfather, Benjamin Spratlin. Benjamin's son Pope left home at 12 years old with a loan of $100 and learned to be a Model T mechanic," Spratlin says. "In the late ’30s, Benjamin gave the car to his grandson Courtney to go to college at Georgia Tech.

"My grandfather Courtney, with the help of his dad Pope, turned the car into a speedster and it has been yellow – for Georgia Tech – and in the same configuration for the majority of its life."

Spratlin’s grandfather gave him the car about five years ago and has since passed away.

"He said that back in the day they called it a Model T Strip, since the normal body had been stripped off," Spratlin says. "He always boasted that he could outrun anybody's Model A. I don't know how true that was or not, but it's definitely true now. Pope and my granddad made a bunch of neat changes to the ’14 T to make it faster and sportier."

The engine got adjustable valve lifters, an accessory oil line, a low head that had been shaved to raise the compression, an upgraded carburetor, a newer four-dip oil pan, a '26/'27 steering column with quicker 5:1 steering ratio and 21-inch wood wheels with demountable rims that use wider balloon tires and make changing a flat easier.

"They also added an original trick muffler called a Taylor Loudspeaker," Spratlin says. The muffler has a megaphone section to make the exhaust louder and a large flap that opens to make a bypass pipe. "Pull a wire and hook it forward on the floorboard and the car is loud and has no back pressure. Unhook it and it’s quiet and sounds like a normal T."

The body is an original aftermarket conversion. Spratlin says he hasn't found any markings to know for sure, but he believes it is a Hoosier body made by Faultless.

"Even the sealed beam headlights are a kit my grandfather bought sometime in the early ’60s that was made specifically to electrify the gas headlamps," Spratlin says. "The engine remains entirely self-contained. I don't need a battery for it to run."

An added 6-volt battery and modern alternator power the lights and "ah-oo-gah" horn, but otherwise all the car’s parts are either original or reproduction versions of parts made in 1927 or earlier.

"I've tried to just stick with the vision he had for the car as a speedster that could keep up with more modern cars," Spratlin says.

He’s added a Rajo four-valve overhead conversion, which may have first been manufactured and sold as early as 1918 and is a bit of historic engineering itself. It uses the stock exhaust valves and system but adds overhead intake valves to improve engine breathing.

For even more zip, Spratlin added aluminum domed pistons, higher lift camshaft, a second identical Zenith Model T carb and dual carb manifold he fabricated, period correct dual exhaust, and both an auxiliary transmission and a Ruckstell rear end that converts the original Ford item into a two-speed with overdrive.

The rugged Ruckstell was first manufactured for sale in 1922 and has the distinction of being the only Model T accessory item endorsed by Henry Ford.

"To go with the auxiliary transmission, I added period-correct accessory brakes that wrap around the outside of the brake drums," Spratlin says. "I still have the original wood spoke wheels but it was cheaper to get Model T wire wheels than to have the wood wheels rebuilt, plus they just look more speedster to me."

The T has an electric radiator fan because the stock fan at the high engine rpm it now achieves could throw a blade into the radiator.

"I'm always messing with it to get more speed or better handling," Spratlin says. "I've added friction shocks and panhard bars, and she rides like a dream and hugs the road. Plus, with the Chicago transmission and Ruckstell rear end she will do everything from pull up stumps to sprint up the steepest hills to cruise at 65 mph on the highway."