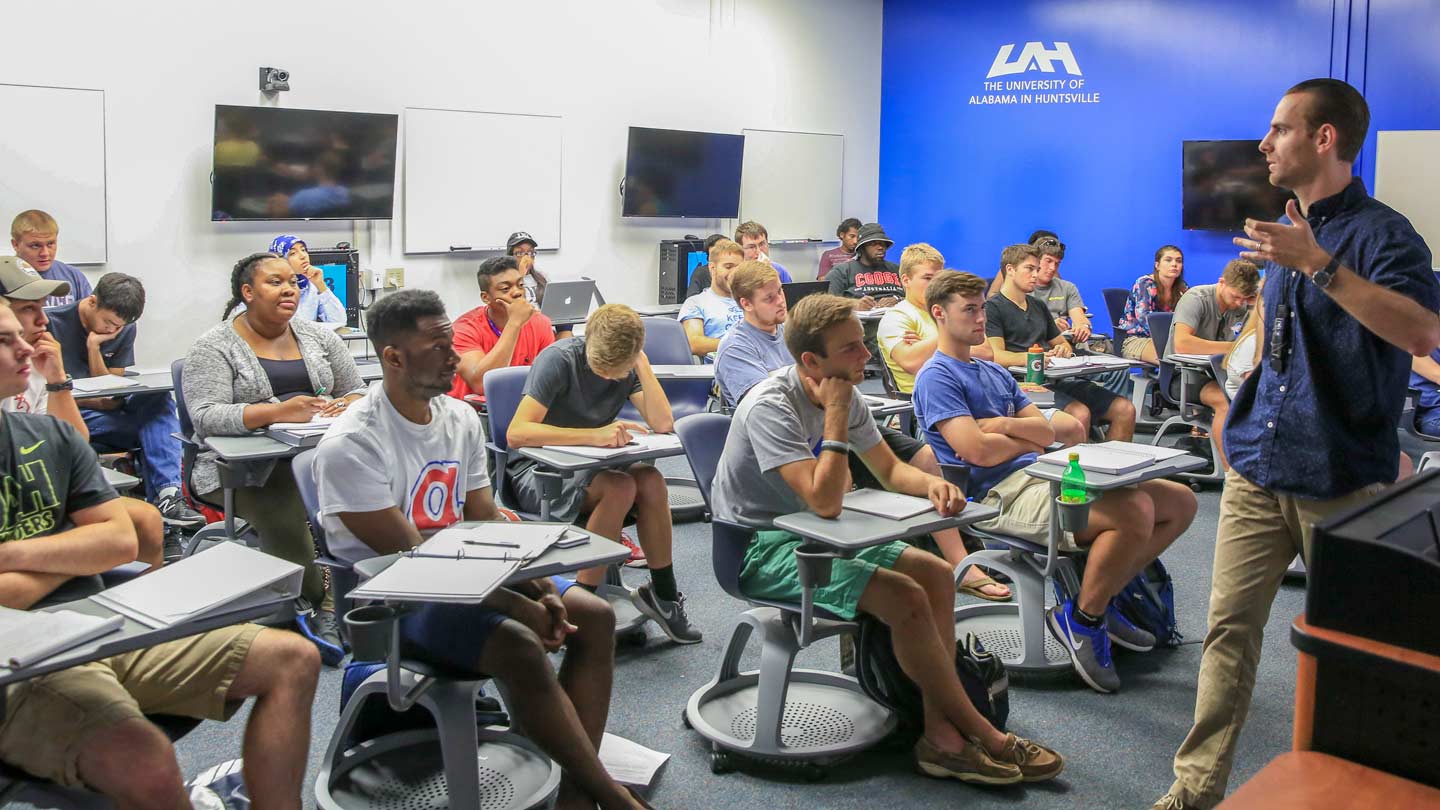 Dylan Baun won a major chemistry award in his junior year of high school. It would seem his future was set. But Baun was more curious about the "connections" between premodern democracy and modern government than the properties of atoms or creating chemical compounds.

Baun, an Assistant Professor of Modern Middle East and Islamic World History in The University of Alabama in Huntsville (UAH) Department of History said it isn't the "facts, dates or figures" that interests him the most about history. "I am fascinated with Middle Eastern and Islamic History for the same reasons I am fascinated with all types of history. Studying the past at the big picture and minute level shows us how all things are constructed (not just 'human nature'), by the tension between people (historical agents) and structures (historical institutions, laws, guidelines, etc.). So whether it is the question of why Americans love barbecue so much (not 'human nature,' right?), or why Egyptians think of themselves as the most cultured of Arabs, I am fascinating with examining how these topics are the product of people, ideas, governments and institutions."

Baun said his inquisitiveness about Middle Eastern history dates back to his college days at Wittenberg University (Springfield, OH). "I took a class on European imperialism my sophomore year, wrote a final paper on French imperialism in Lebanon after World War I, and the following year, studied abroad in Athens, Greece. There, I took a Middle East Politics class and traveled to Cairo, Egypt," Baun said. "Since I was young, I had been interested in historical connections (and disconnections) and now after this experience in undergrad, I had a region of the world that I wanted to focus on. The rest, as we say, is history!"

A native of Pittsburgh, Baun said three things led him to UAH: the personal classroom setting at a 'bigger' state institution, wonderful colleagues and a diverse student body. "Although I have learned UAH is growing every year, most of my introductory courses are capped at 40-50 students and my upper divisions at 20-30. This means while my students and myself can have access to the research dollars/scholarships associated with state schools, we can also benefit from a small, intimate liberal arts classroom. To me, that is the best of both worlds!

"My colleagues in the history department are truly wonderful," Baun said. "Our department is small, so it has been easy to get to know everyone quickly and find my place in the department. Lastly, I came to UAH because of the diverse student body and I have really enjoyed this so far. I have students straight out of high school, students with children, students in the military, students from Brazil, etc. In my experience, a diverse classroom contributes to a diversity of perspectives. Having these diverse perspectives allows each and every one of my students to see the multiple sides to a given argument, event or concept, which is the key to critical thinking and engaged citizenship. "

Baun teaches several classes at UAH. At the introductory level, he teaches modern world history. "My main goal for this course is to demonstrate how the history of the world is interconnected, and no one region (whether the Middle East or southeast Asia) is isolated or on an island. World history then is the study of encounters, physical, ideological or otherwise." At the upper-division level, he teaches a Middle East survey sequence: Islamic World to 1800 and Modern Middle East. "Together, these courses are meant to provide students with a foundation to understand the political, social, cultural and religious factors that have shaped the Middle East. In terms of upper-division thematic courses, I teach courses entitled 'Being Young in the Modern Middle East' and 'Sectarianism in the Islamic World'. These classes are meant to go more in-depth into a theme within the study of Middle East history, and discover what it shows us about this complex region," Baun said.

He has several on-going research projects including transforming his dissertation on youth clubs to a book. It examines the history of youth and young people in the 20th century Middle East. "I am interested in the cultures that form around groups of young, non-elite, men and women in the history of the modern Middle East, especially their involvement in grassroots movements, street politics, calamitous events and violent encounters (e.g., protests, police crackdowns, revolutions, street brawls and wars)." The manuscript is tentatively entitled Winning Lebanon: Street Politics, Youth Cultures and the Emergence of Sectarian Violence in the Middle East.

Baun said in terms of connections, there are many between the youth clubs he investigates in the 20th century Middle East and those of 21st century America, including the Black Lives Matter Movement. "They are often anti-status quo, grassroots, populist, leaderless, face violent crackdowns, and as a result of these messages and realities, are affective in mobilizing young people. As gaps between rich and poor, majorities and minorities, western countries and the global south continues, I think we can expect more social justice movements made up of disenfranchised young people."

In addition to his manuscript release, Baun will soon publish the article, "The Gemayzeh Incident of 1949: Conflict over Physical and Symbolic Space in Beirut," (Arab Studies Journal, Spring 2017).

"It is the story of a street scuffle between two youth clubs in the Gemayzeh neighborhood of Beirut. Surprisingly enough, this minor brawl and its aftermath changed the course of Lebanon's modern history," Baun said. "The article is meant to incorporate youth clubs into the history of modern Lebanon and demonstrate that these groups were not just the pawns of bigger powers. Rather, they are agents in historical change."

Baun earned a Master's of Arts degree and a PhD in Middle Eastern Studies (History, Culture and Society) from The University of Arizona.