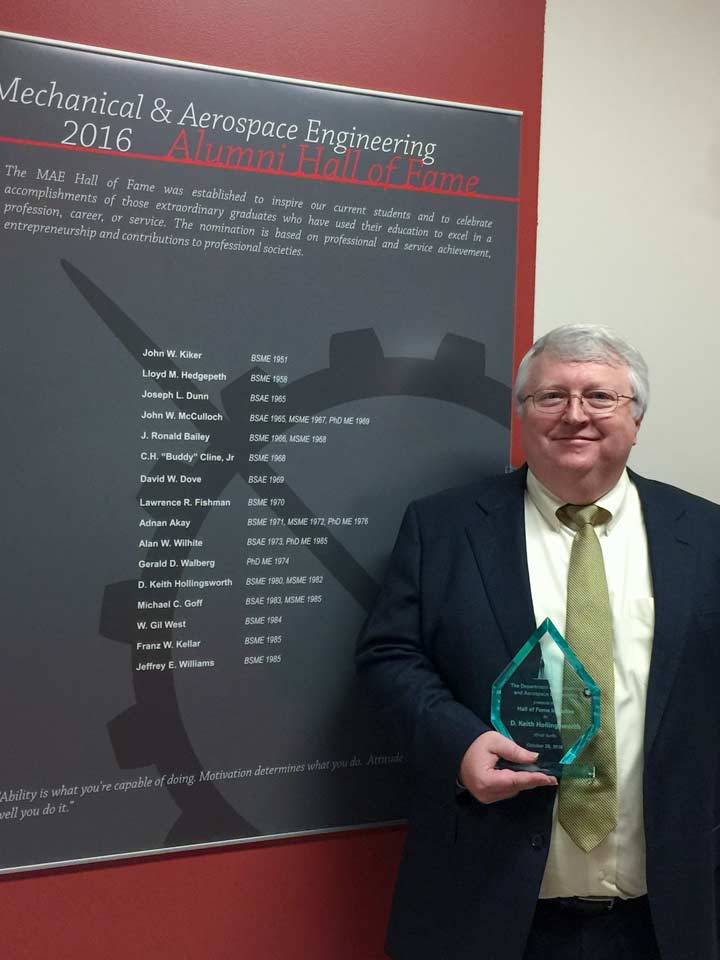 He is among just 96 out of 12,000 NC State alumni who have been inducted to date. The NC State MAE Hall of Fame was established to inspire current students and to celebrate accomplishments of those extraordinary graduates who have used their education to excel in a profession, career or service. The nomination is based on professional and service achievement, entrepreneurship and contributions to professional societies.

"This is perhaps the nicest honor I have received during my career, and this was the first milestone event since my doctoral graduation that my parents could attend and experience," says Dr. Hollingsworth. "That made all this very special indeed. To be recognized in this manner by one’s alma mater is unlike any other award, and for me it comes 40 years – nearly to the day - after I began at NC State as a freshman in the fall of 1976."

The honor has caused him to reflect upon his career and on the power of a university education, he says.

"It has reminded me of the reach and transformative power of state universities.  I grew up on a tobacco farm in eastern North Carolina and that state’s engineering school provided me with the opportunity to distinguish myself as a student and to meet the mentors who opened the first of many doors I’ve encountered along the way.  Now as a professor and a department chair, I get to shape how this state university – UAH - functions for both the current generation of students and the current generation of young faculty members."

After spending 22 years on the faculty of the University of Houston, Dr. Hollingsworth arrived at UAH in 2011 as the result of an external department chair search.

"It has been a busy five years. We have hired seven tenure-track faculty and five full-time lecture faculty, our undergraduate enrollment has risen from 730 to 1,050 students and our research enterprise has expanded significantly," Dr. Hollingsworth says. "For example, in the last couple of years I counted seven active grants to MAE faculty from the National Science Foundation alone. Managing the administration of this department is a great privilege and very much a full-time job."