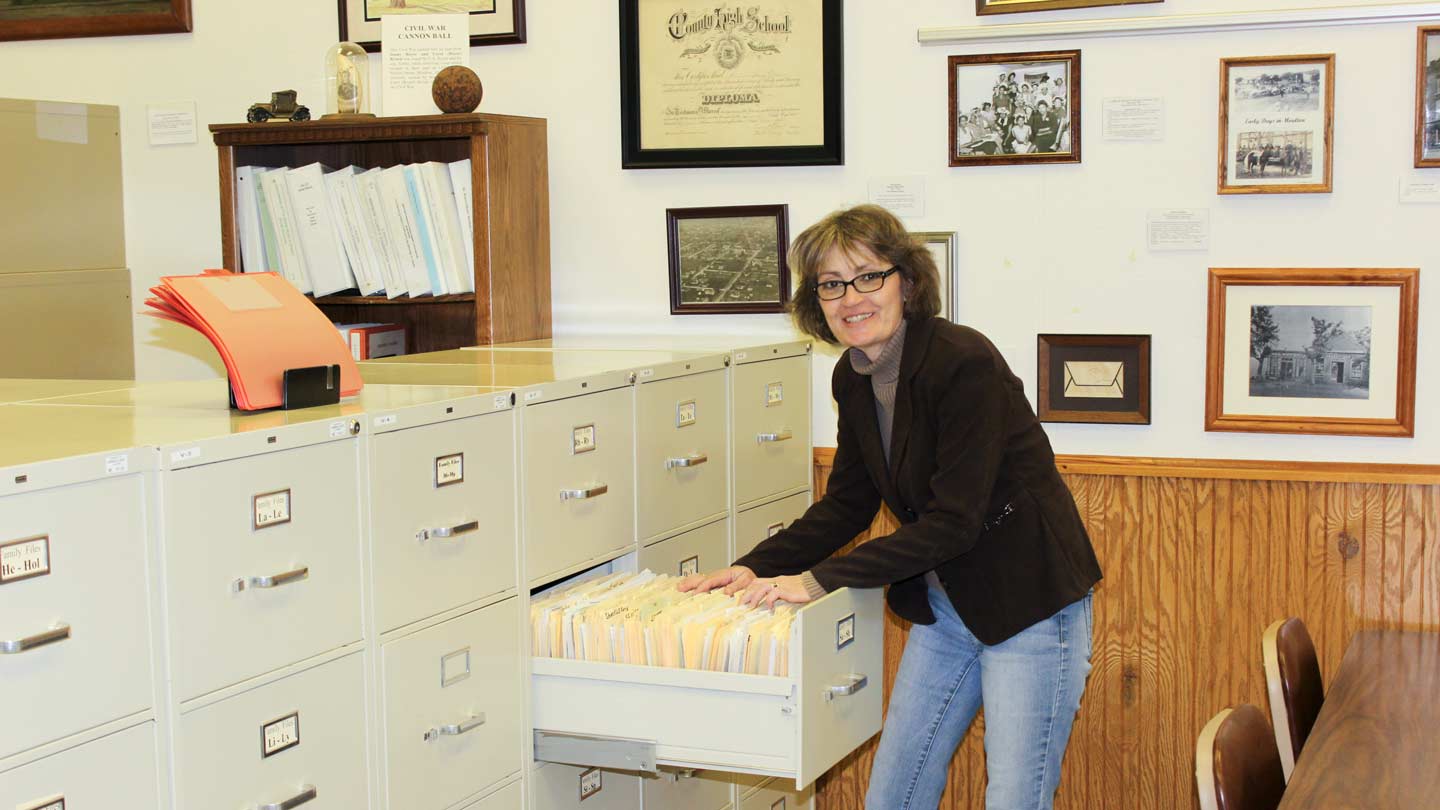 A lot of Lawrence County, Ala., history is now in the hands of a University of Alabama in Huntsville (UAH) alumna.

"Yes, I am the keeper of a lot of history," she says. "The Archives houses 150 years of Lawrence County history in the form of mortgage and tax records, Orphans and Probate Court records, marriage licenses, divorce records, loose case papers, local newspapers and private family documents that have been donated to the Archives for posterity, among other things. It is a privilege and an honor to be the guardian of so many important things, and it is a tremendous responsibility. It is also incredibly fun!"

Finding out new aspects of the winding path that is Lawrence County history is the most interesting thing about the job, Hazle says.

"Learning about small communities that used to exist in the county, but have long since been lost to time and distant memory. Reading documents that give a vivid picture of life 200 years ago. Reading newspapers from 1868 that only give snippets of information because it was understood that the readers would know the backstory so there was no need to print that!" she says.

"The community sections of the newspaper are wonderful also as they describe happenings in each community such as, ‘Mrs. Luther Boyles spent the day visiting with her sister. It was a joyous day for the two ladies.’ This would have been something that was printed in the 1930s. While some people might find that ridiculous, I think it’s wonderful! It’s not only a glimpse into the past, it’s also an incredible help with tracing family, in some cases."

Currently, she is at work on a comprehensive slave database and vertical file, using documents pertaining to slaves held in the county that were printed from microfilm by prior Archives employees. They include last will and testament documents and Orphan’s and Probate Court records.

"My goal is to comb through these documents to list all the names of slaves and owners, condense all the pertinent information in each document to a file folder, then finally build a searchable database that contains all this information," Hazle says. In the system she is developing, the file folder tab will have the names of Doe and Smith, while the folder itself will list the slaves’ names.

"As I enter the information into the database, I will list as much information as possible for help in identification," she says. "Tracing family can be very difficult for African Americans, and I hope this project will make it easier."

She’s also working on raising community awareness of the Archives.

"Too few people in Lawrence County realize what valuable information is housed in the Archives, and I want to banish the idea of this being just ‘that place that has all that old dusty history. The Archives are so much more than that!"

Hazle credits her predecessor director, Myra Borden, for her work organizing the records for access.

"In my short tenure as director, I have received numerous compliments on how much information the Archives has, and how easy it is to find that information," Hazle says. "I hope I can carry on the tradition Myra started and add my own vision to the Archives."

In addition to the records at the historic bank building, the Lawrence County Archives has a website with searchable databases. The databases provide information on where to find the actual documents. Once someone has the information, they contact the Archives and Hazle pulls the microfilm, book or document and makes copies to mail, or scans them to email. There is a fee for the service, which is the only real source of income the Archives has outside of minimal funding from the Lawrence County Commission.

Once someone comes in to the Archives on a quest for information, Hazle thinks they’ll be amazed at how much is readily at hand.

"We have military files with information on veterans in every war since the Revolution. Genealogists, those searching for deed records and court cases, those needing access to Ancestry.com, anyone in search of old newspaper articles – these are all the people that come here," she says. "Lawyers can find information on old cases here .which has been helpful more than once – and surveyors also find the records here helpful when surveying property for ownership disputes."

The Archives’ cemetery records are a gold mine for those needing to find forgotten cemeteries.

"We have surveys of cemeteries in Bankhead Forest that have been lost for years," she says. "More than one cemetery has been found again because of the records."

Hazle was born and reared in small-town Lockport, Ill., but her father’s family was from Lawrence County. Her parents moved permanently in 1991 and she came with them, eventually meeting and marrying her husband, David.

"I was so excited by my success that I decided to further my education by getting a bachelor’s degree," she says. "I chose to go to UAH to get a degree in mechanical and aerospace engineering. However, two semesters into that program, I knew I hated it. First, I was not very good with physics, chemistry, or calculus, and second, it was all very boring to me. I like to take mechanical things apart to see how they work, but I do not want to know how to calculate gear ratios."

"There are many things I learned at UAH that help me in my job, methods of research being the main thing," Hazle says. "So many people come to the Archives not even knowing where to begin to find the answers they seek, and UAH taught me a great deal about how to coax answers out of the past. It also taught me that there are a lot more records available than people realize. Most people think you cannot find any information earlier than the Civil War, but they are so wrong! There are many resources and records available."

Her senior UAH thesis wound up being a self-published book, "Moonshine and Murder or Legends and Lies," about the Owens Chapel Church shooting in Lawrence County.

"Well, I blame it all on Dr. John Kvach!" she says. "Just kidding of course, but he was the instructor for my senior seminar class."

Stumped for a thesis subject, she remembered the story of the shooting in the Owens Chapel Baptist Church.

"It happened in 1937, long before I was born, but my grandparents and many members of my family had been in the church when the shooting took place," Hazle says. "I heard the story all my life, and I always heard the shooting occurred because of moonshine. That intrigued me, and with Dr. Kvach’s help, I decided I would write about the history of moonshine in the United States using the shooting in the church as a focal point."

Word of the paper got out and she was contacted in 2015 to be a presenting author at the annual Moulton Reading in the Garden event, a benefit for the library. When Hazle replied that the subject was a paper and not a book, she was urged to publish one. So she did.

"It’s been available online ever since," she says. "I ordered 20 copies of the book to take to that first event, thinking no one could possibly want a copy of my little book when so many other distinguished authors were also there selling their books, but when it was all said and done, I had sold all 20 copies and gave instructions to several more people about ordering a copy online. Needless to say, I was shocked! It has been interesting to hear from people who have read it and contact me to tell me the legends about the shooting in their own family. "