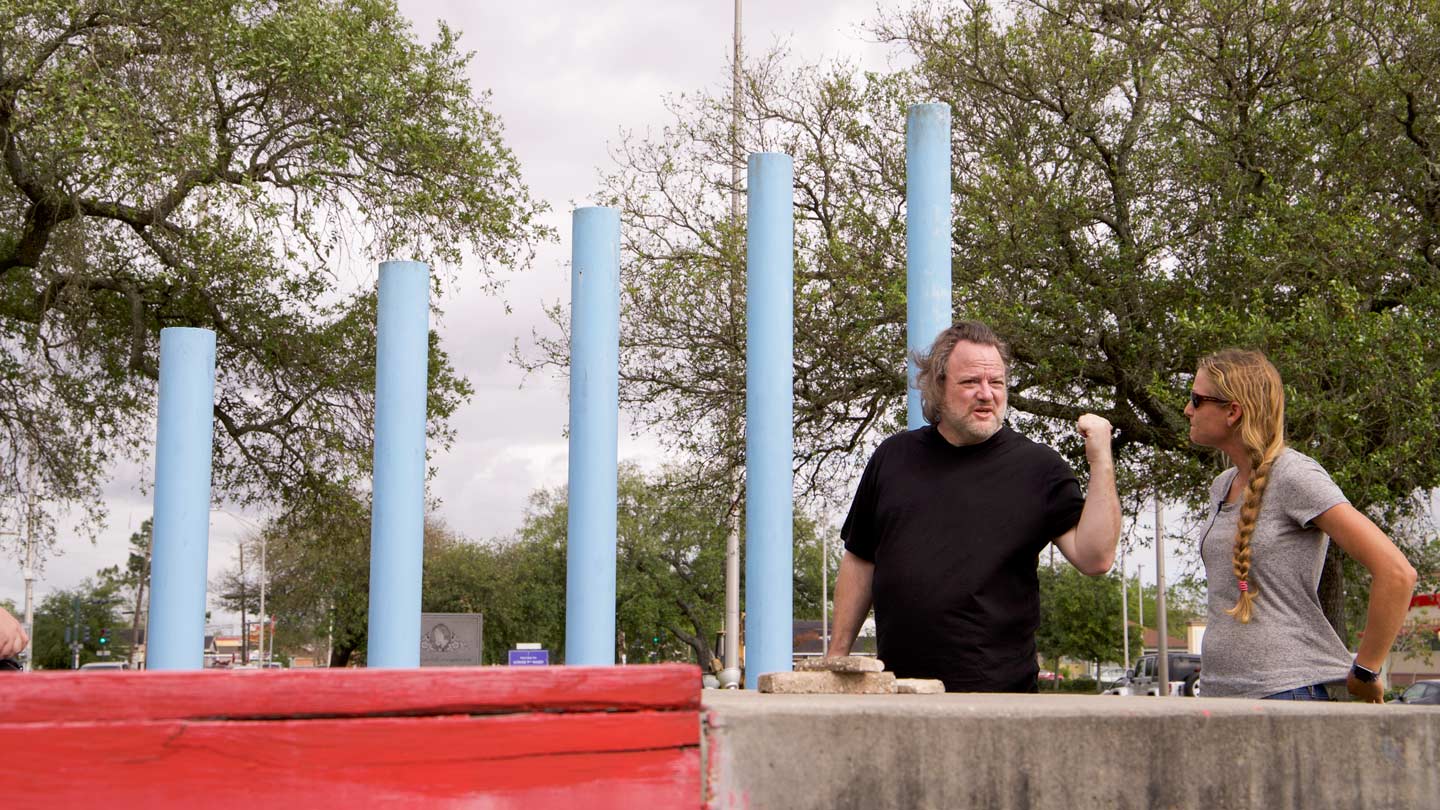 Dr. Joseph Watson, assistant professor in the Department of Communication Art, recently traveled to the Lower Ninth Ward in New Orleans to complete filming on his upcoming documentary "Jazzland: Present Yet Absent."

If there’s one lesson that Dr. Joseph Watson hopes the students in his film classes take to heart, it’s that communication is an essential part of the filmmaking process. "You can’t do it by yourself – you have to rely on other people," he says. "Because the arts are collaborative by nature. So while the students need transferable skills, they also need to think creatively, work spontaneously, and be good communicators."

He should know. After a 20-year career as a professional in the live theater and film industries, Dr. Watson went on to earn a Ph.D. in communication studies before joining the Department of Communication Arts at The University of Alabama in Huntsville (UAH) as an assistant professor. "It’s pretty cool because I was able to merge my passions for education and the arts," he says. "It’s also a lot less stressful than working under the gun on a production with a huge budget. In academia, I have the freedom to pursue a much more organic process."

The arts are collaborative by nature.

He is currently teaching two courses in film production and one in writing for visual media, as well as serving as the faculty advisor for Charger Productions, the student-run organization that hosts the UAH Film Fest. Through each of these endeavors, he is seeking not just to increase his students’ understanding of the subject matter, but also to encourage their passion and nurture their abilities. "I tell them, look, you all have talent or you wouldn’t be trying to refine these skills," he says. "But my job is to help you format and structure them in more nuanced and professional ways. I let them play in the water; I just don’t let them drown."

Last semester, in an effort to provide students in his introduction-level film production class with some real-world experience, Dr. Watson helped them submit an entry to the Spooky Scramble, a filmmaking competition hosted by the Birmingham-based non-profit film organization Sidewalk. "You have 48 hours to make a five-minute horror short film, so it works like a relay race," he says, adding that they were "randomly assigned" the subgenre of clown/doll stories. "You have the team that writes the script, then they pass it off to the production team to shoot it, and then they pass it off to the editing team to do the post-production work. But you can’t teach this in a classroom – they have to learn by doing."

The result was "Johnny," in which a young man named Johnny who receives a package intended for his creepy, clown-obsessed neighbor ends up getting trapped in her house when he tries to return it. 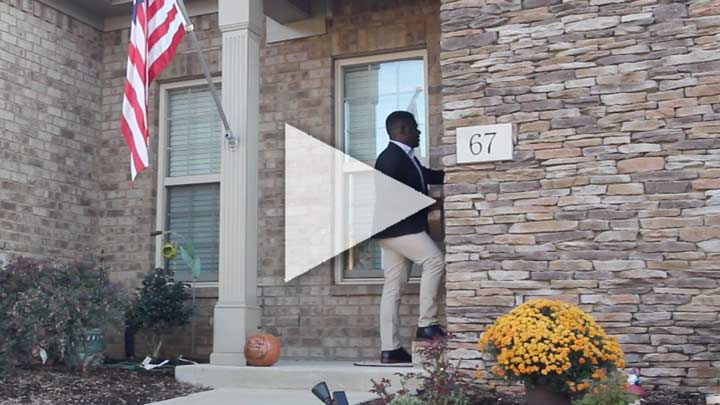 "We didn’t win, but I didn’t expect to," says Dr. Watson. "The point was to get screened at the festival, because it puts UAH on the map. And that was my ultimate goal – for active film communities working in and around Birmingham to understand that we’re starting to build something special up here."

Since then, it has also been selected to screen at the NOLA Horror Film Fest in New Orleans and has been submitted for consideration to both the Nightmares Film Festival in Columbus, Ohio, and the Videoscream International Film Festival in Portland, Ore. "I like to build good community and industry relationships , and so for me it’s about finding the pockets of people doing the same things," he says. "And for the students, they get connected to these people, which hopefully leads them to successful professional careers."

In addition to his course load, Dr. Watson is working on a feature film screenplay tentatively titled "Armor of My Heart," which he hopes to shoot next spring with Allen C. Gardner, a professional filmmaker and the owner of Open Dialogue Productions in Los Angeles. "It’s basically 48 hours in the lives of six threaded characters who are overcoming the loss of a public figure in the town," he says, adding that the plurality of the cast and crew will be UAH students. "I want to give them the closest thing possible to a real-life cinematic experience so they can see what it’s like to be a on a movie set making a feature." 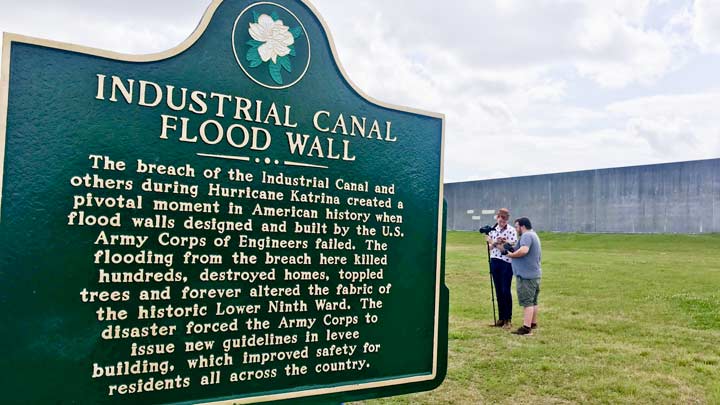 UAH students Christian Stanfield and Travis Craft accompanied Dr. Watson. Here, the pair are setting up for an interview at the levees.

He is also in the process of wrapping up "Jazzland: Present Yet Absent," a passion project he began long before arriving at UAH. The full-length feature focuses on the fate of an amusement park that was abandoned after Hurricane Katrina left it submerged in 16 feet of water. "I’m shooting the rest of the footage that I need to complete the documentary," he says, "and then over the summer I will do the post-production work." Thanks to a grant from UAH’s Research or Creative Experience for Undergraduates program, he’ll be assisted in that effort by junior communication arts major Devin Townsend. "I would imagine that if all goes well, we could look at the fall or spring for a release," he says.

As exciting as that is, however, Dr. Watson’s ultimate goal is not to promote his personal filmmaking achievements. It’s to leverage both his own films – "Armor of My Heart" and "Jazzland: Present Yet Absent" – as well as his students’ to bring attention to UAH as an up-and-coming player on the arts scene. "We already have a great theatre program, a great communication program, a great art program, and a great music program, so a great film program would complete the picture," he says. "And the way you not only recruit but retain students is by producing content and being active in the community through screenings and collaborations, both on and off the UAH campus. People have to know you’re here."

In other words, it’s all about communication.