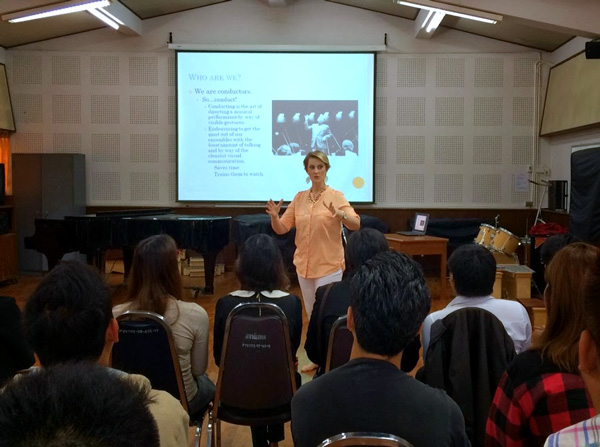 HUNTSVILLE, Ala. (March 12, 2014) - If the life of a choral conductor doesn't sound very exciting, then you probably haven't met Dr. Erin Colwitz. An assistant professor in the Department of Music at The University of Alabama in Huntsville (UAH), Dr. Colwitz has traveled the world as part of her job.

Last year, for example, she went to South Africa to study Protestant church music in the post-apartheid era. And last month, she and her husband, retired conductor William Dehning, flew to Bangkok, Thailand, to headline the Chulalongkorn University Choral Festival.

"The nice thing about UAH, unlike other tier one research universities, is that they allow music faculty to have creative activities count toward research," says Dr. Colwitz. "And guest conducting, teaching clinics, and adjudicating competitions, especially international ones, is good for our dossier."

It's also good for the people they are there to help, which is why Dehning's former student, Dr. Pawasut "Jodi" Piriyapongrat, originally invited the distinguished couple to Bangkok. "Jodi is the only person in that country with a doctorate in choral music," says Dr. Colwitz, "so her job as she sees it is to bring in clinicians."

Dr. Colwitz and her husband visit with students at Dara Wittayalai School in Chiangmai.

To that end, Dr. Colwitz and her husband were primarily tasked with helping Bangkok's music teachers understand how to interpret Western music. "Western choral music is very popular in Asia, but while they sing with Western harmony, they don't know how to interpret it," she says.

That's because interpreting music depends a lot upon what's written between the lines, not necessarily on the lines. "Stylistically there are things you do to make it sound baroque or romantic depending on the period," she says. "Most of us know those things because we hear Western choirs all the time, but that's the information they're lacking."

So Dr. Colwitz and her husband worked with the five college choirs chosen to perform at the festival, offering conducting clinics and choral singing workshops. And they spent some time in the city of Chiang Mai, teaching low-income students at Dara Wittayalai School and college choir members at Payap University. 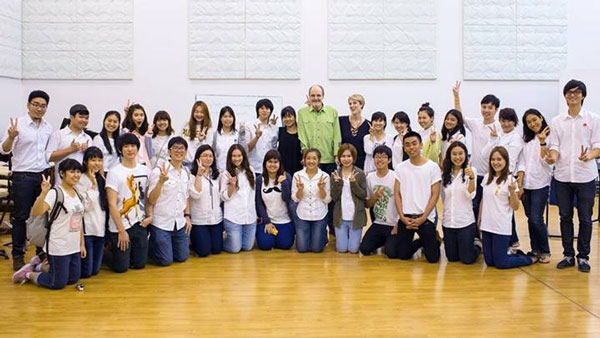 Dr. Colwitz and her husband visit with Chulalongkorn University students in Bangkok.

"The end of the festival culminated in a performance, each choir with their own set and then all of the choirs together," she says. "It was so fascinating was to listen to them when we first got there, and then listen to them at the end. They made so much progress."

And now that she is back? There's no time to rest. In just a few weeks, she'll travel to Europe with UAH's wind ensemble and choirs. "We're going to London and Paris, where we'll be performing at Notre Dame Cathedral," she says. "Some of the kids have never been on a plane, so it will be a whole 'first' for them."

A first, maybe, but should they decide to become choral conductors like Dr. Colwitz, it certainly won't be a last!