For one IS graduate student, real-world experience leads to real-world job 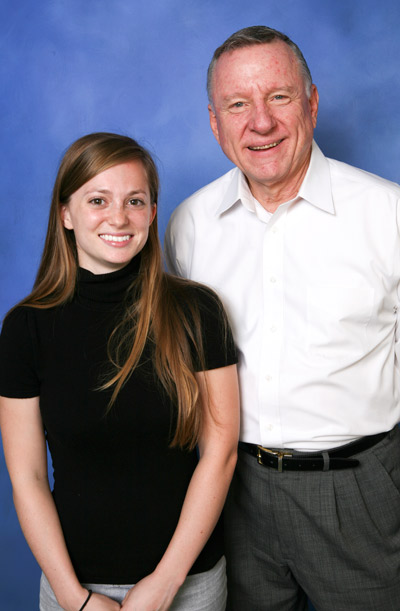 HUNTSVILLE, Ala. (Oct. 24, 2013) - Jennifer Palm might make the best case for why kids should listen to their mothers. "All through high school, my mom was like, 'Take a computer class, you're going to love it!'" says Palm. "But I was a stubborn child, and I went to college to get a degree in marketing."

It was only later, during an internship in which she learned how to code a website using HTML, that Palm realized her mom was right - she was a perfect fit for the information technology field. "Programming was my favorite thing," she says. "So I took a Visual Basic class and loved it!"

A future in marketing was out the window. After graduating from Alabama, she enrolled at The University of Alabama in Huntsville (UAH) to pursue a master's degree in information systems management. There was just one small problem: "I had no information technology experience at all!" says Palm.

The solution came in the form of UAH's newly formed iSystems Club, a student-run organization designed to give information systems (IS) majors the opportunity to grow their business, social, and technical skills through hands-on experience.

"I'm not very social, but I said here's a way I can boost my resume and learn about different topics in the field," she says. Palm was especially interested in the club's iGiveBack program, which affords members real-world experience through projects with local non-profit organizations.

"I really liked the idea of being able to help out the community, and of doing something for a group that does so much for our community, but that really doesn't profit from it," she says. In this case, the group was the Huntsville Community Chorus Association's (HCCA), whose website was long overdue for a redesign.

"It was very outdated, boring, and bland," says Palm, "and they wanted it to go in a completely different direction. They wanted it to be softer and warmer, with more features." But far from just being a team member on the project, as she expected, Palm was assigned to be the manager.

"Chakri is just all about throwing us into new experiences because he believes immersion is the best way to learn," she says of the club's faculty advisor, Chakri Deverapalli. And, she adds, "he's right! You have to have no way out, and he knew that if he put me in charge of it, I would do my best to learn it as well as I could."

I feel like I learned from the mistakes I made, so I’m very grateful for that experience.

So she accepted the challenge to manage the product and oversee four team members. "I learned a lot about how to manage my time and other people's time," she says of the experience.

But the one issue she still struggled with was her lack of programming knowledge. "How can I tell someone to go do this if I didn't know myself? Because I can't answer questions if they have them."

So she turned to fellow IS student and iSystems club member Thomas White, who also works as a programmer for UAH's Systems Management and Production Center.

"I have to include Tom as a team member because he put in as many hours as I did instructing me in the functionality of the Joomla system! There was a lot of, Tom, please explain this to me so I can explain it back," she says, adding that YouTube and Google were also her "best friends."

Finally, though, it began to click. "I wouldn't say I'm a native speaker of Joomla but I'm definitely well versed in the Joomla language now," says Palm. And just as she learned more about programming, so too did she learn more about herself as a manager.

"I like to have my hand in every pot and control it, so saying you go do this job and accept whatever work you give me was difficult for me," she says. "But I feel like I learned from the mistakes I made, so I'm very grateful for that experience."

Another challenge? Letting go. "We could have had this website and worked on it for the rest of the year and there'd always be more updates," she says, "so that was a struggle, letting it go even though it wasn't my idea of perfect."

Fortunately, as an experienced faculty advisor - and a business owner himself - Deverapalli had not only anticipated but prepared for this. "Chakri is very adamant about having set times we do these projects," she says. "He likes having closure after a certain point, so we have to step away."

So this past August, as the project drew to a close, it was time for the big reveal. Palm knew they'd met the HCCA's requirements as far as increased functionality, but she was unsure how they would like the changes the team had made. Turns out she had no need to worry.

"It's wonderful!" says Steve Peters, HCCA president and now ardent fan of the iSystems Club. "The quality of work was professional, the dealings with the students was as professional as you could expect from any reputable firm. It was extraordinary, and I sing their praises to anyone who will listen to me!"

Not to mention, it was as close to free as a website redesign could get. "We took something that was thousands of dollars and we gave it to them for the few hundred dollars needed to buy software," says Palm. She also wrote a basic maintenance manual so that the HCCA could keep the site up to date without the team's assistance. (Please note that the HCCA has not yet launched the site designed by iGiveBack at this time.)

But even though she may not have been paid for her work, Palm still ended up profiting in a major way from the experience she gained. Shortly after completing the HCCA project, she was offered a full-time position as an analyst with Accenture, something she doubts would have happened otherwise.

"I think the iSystems club had a lot to do with getting me that job," she says. "Taking a leadership role in that club showed that I am interested in the field, and it put me in contact with really influential people."

And as for Palm's mother? Well, some might say she deserves a little credit too…