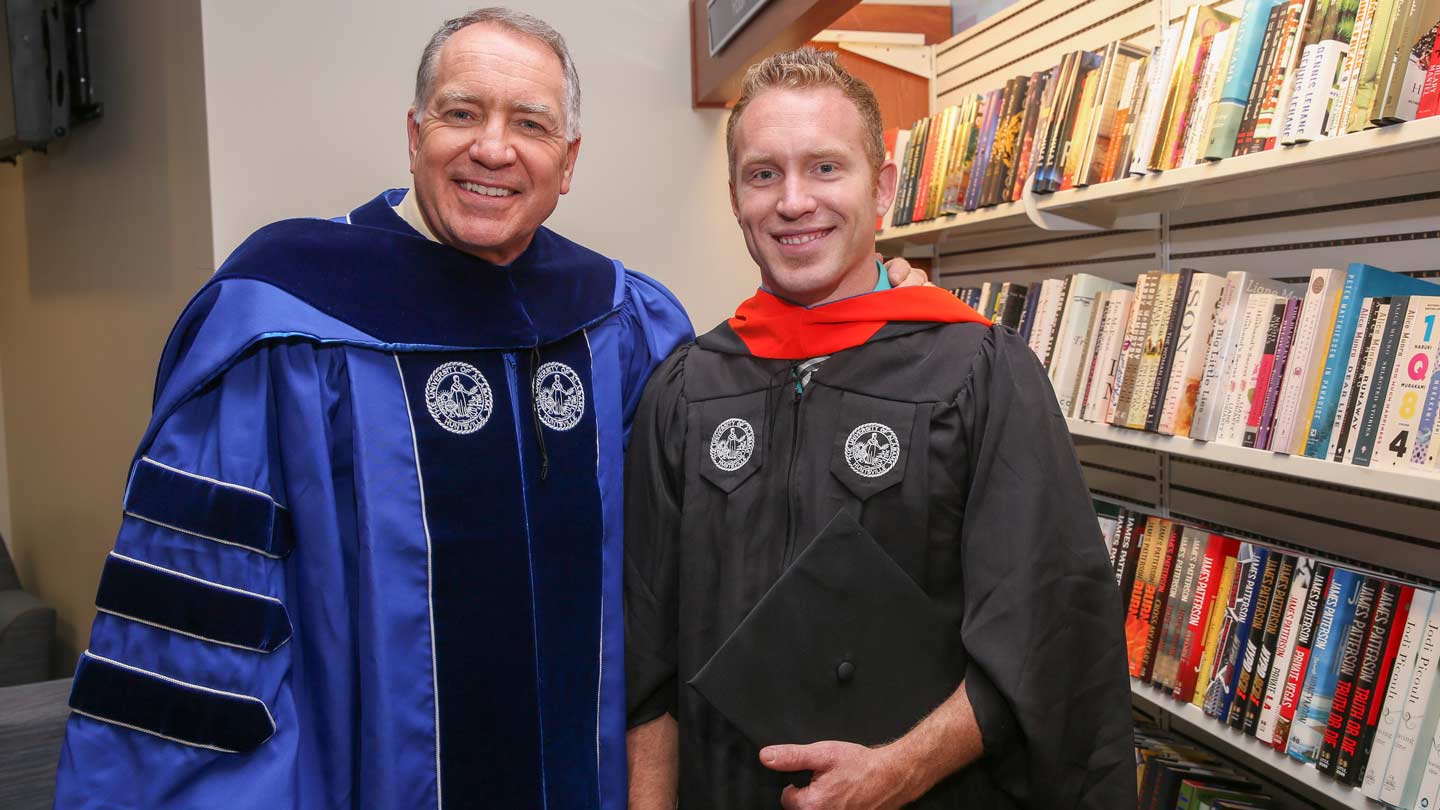 Jim Knox is earning his Ph.D. in mechanical and aerospace engineering while his son, Clinton Knox, is pursuing his master’s degree in electrical and computer engineering. Once they have both completed their requirements for graduation, they plan to walk together at commencement.

While his mom has been a big influence in his life, it's safe to say that Clinton Knox takes more after his dad - so much so, in fact, that he and his father, Jim Knox, are both currently enrolled as engineering students at The University of Alabama in Huntsville (UAH): Clinton is pursuing his master's degree in electrical and computer engineering, and Jim is earning his Ph.D. in mechanical and aerospace engineering. "It's a unique experience," says Clinton with a laugh.

It's also one that almost didn't happen. "I was originally working as an electrician after high school when I decided I wanted to do engineering," says Clinton, who earned his bachelor's degree in the fall of 2014 as part of UAH's joint undergraduate master's program. "I thought it would be a stable career and an interesting one." His father, for one, couldn't have been more supportive. "I was glad," says Jim, a chemical engineer by virtue of 29 years of on-the-job training. "I think it's a great degree!"

After growing up near Boston and earning an undergraduate degree in aerospace engineering from the University of Colorado Boulder, Jim landed a job with NASA's Marshall Space Flight Center working on the development of life support systems for future spacecraft. With UAH just around the corner, he was able to finish his master's degree in mechanical engineering in 1991. But it wasn't until almost a decade later that he decided to return for his Ph.D.

"I wanted to do more technical work in my job and I was interested in focusing on understanding some fundamentals of the processes I work on instead of going toward management," he says. Clinton, meanwhile, was wrapping up his high school education as a homeschooler with the North Alabama Friends School. A few years later, he too was enrolled at UAH. "It was close to home," he says, "and it's known as a good engineering school."

Before long father and son were meeting up for study sessions in Jim's office. "Even though we have different specialties, there are a lot of the same classes leading up to them," says Clinton. "So my dad had taken probably 75 percent of the classes I was taking." His notes weren't exactly up to date - "There was a 20 year gap!" laughs Clinton - but the two enjoyed working through differential equations together. "They were a blast," says Jim.

Another, unexpected benefit? The hours they spent together also created a bond between them at a time when most fathers and sons are moving apart. "It's hard as an adolescent because you lose common interests, so that was the start of bringing back that common interest into our relationship and bringing us closer," says Clinton. And with Clinton graduating this spring, it's given Jim the push he needs to finally finish his dissertation. "It's been a long process but I want to be able to walk together," he says. "It's become more important to me to get it done, and I'll be really happy to get it behind me."

Clinton, too, is looking forward to what's next. With his UAH degrees almost in hand, he is excited about his prospects for the future. "It's definitely going to make the rest of my life easier - providing a comfortable living for my family and retirement-wise," he says. He's also mulling the possibility of returning to UAH one day to get his own Ph.D. "I'm thinking about it," he says. "I'd like to do research that runs in parallel to work and that will help me in my career."