Dr. Schroer an inaugural member of AAMA Hall of Fame 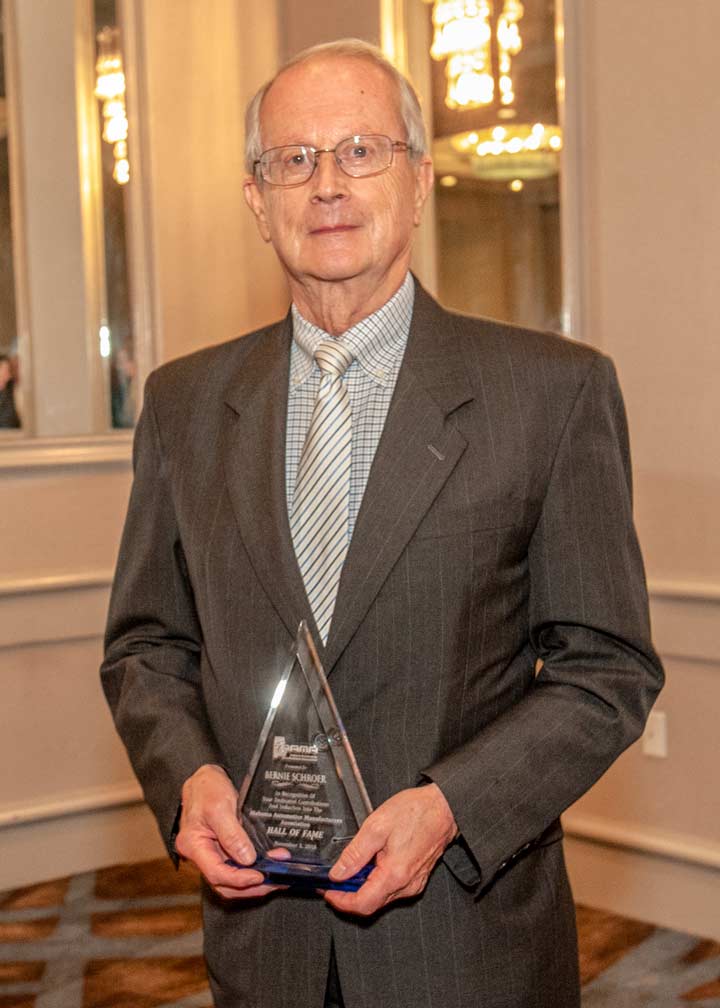 Dr. Bernard Schroer was one of three inaugural AAMA Hall of Fame inductees.

The Alabama Automotive Manufacturers Association (AAMA) has inducted its founder, Dr. Bernard Schroer, a retired University of Alabama in Huntsville (UAH) associate vice president of research and industrial and systems engineering professor, into its inaugural Hall of Fame.

The AAMA Hall of Fame recognizes individuals in Alabama who have made a significant impact on the establishment and growth of the automotive manufacturing industry in the state.

One of three inaugural inductees, Dr. Schroer was also a principal research engineer at UAH’s Center for Management and Economic Research (CMER). The other two inductees were Ed Castile, deputy secretary of commerce, Workforce Development Division and director of Alabama Industrial Development Training (AIDT), and Bill Taylor, former president of the Economic Development Partnership of Alabama (EDPA) and past president and CEO of Mercedes-Benz U.S. International.

"I was surprised that I was considered on the level of these two industry leaders," says Dr. Schroer. "It is truly a great honor to be inducted in the AAMA Hall of Fame with these two individuals."

The induction ceremony was part of the Annual AAMA Awards Banquet at the Wynfrey Hotel in Birmingham on Nov. 1.

Dr. Schroer formed AAMA in 2001 and advocated for the growth of the automotive manufacturing industry in Alabama before his retirement in 2011. He retired from UAH with over 30 years of service and remains active in the university.

He served as AAMA’s first executive director from 2001-2011. AAMA’s headquarters was located at UAH for many years and currently UAH assists AAMA with administrative support. Dr. Schroer says AAMA’s arrival on the scene was well-timed.

"Mercedes-Benz was already operational in Vance. Shortly thereafter, Honda announced coming to Alabama," Dr. Schroer says. "Then the Toyota engine plant announced for Huntsville, following by Hyundai in Montgomery and the Navistar engine plant in Huntsville. You can see that you could not have asked for better timing in establishing AAMA."

"At that time, in 2001, UAH was one of the original 10 regional Alabama Technology Network centers and was working closely with the automotive industry in the state, providing continuous improvement training and actual continuous improvement implementations," Dr. Schroer says. "There was an obvious need for the new supplier base in the state to know each other and to get together on a regular basis to network and to share best practices."

At AAMA’s founding, the new original equipment manufacturer (OEM) assembly plants were looking for suppliers that would locate near plants for just-in-time delivery.

"Annually AAMA would host a supplier matchmaking meeting where OEM suppliers would bring in their buyers to meet with potential suppliers," Dr. Schroer says. "Many companies became suppliers through these meetings."

AAMA led the effort to start the Southern Automotive Conference (SAC) and partners with the Tennessee, Georgia and Mississippi automobile manufacturers associations to produce the SAC each year, rotating the location annually to a different state.

In Alabama, the organization provides strategic direction to workforce development by strengthening the business and education alliance, improves automotive manufacturing processes and systems and conducts programs to share knowledge on issues impacting the automotive industry in the state.