University of Alabama in Huntsville Vice President for Diversity Delois Smith has received the 2017 Educational Leadership Award from the Huntsville Progressive Alumni Chapter of the Alabama A&M University Alumni Association.

The annual award honors outstanding leaders in the Huntsville-Madison County community who have made and are continuing to make outstanding contributions in their respective professions and to the community.

Smith was honored for her "outstanding contributions in diversity leadership and tireless service to the community," according to a letter from the organization’s president, Verlindsey B. Stewart.

"I was very humbled and overwhelmed with the recognition and the nature of the award for educational leadership in my community for diversity and inclusion concerns and initiatives," Smith says. "The UAH Office of Diversity and Multicultural Affairs (ODMA) sponsored a series of quarterly campus and community forums on race relations throughout 2016, hosted here on campus. Many community leaders and campus members came together to discuss current issues happening in the country and how we could best understand and address those issues and implement preventive measures in Huntsville." 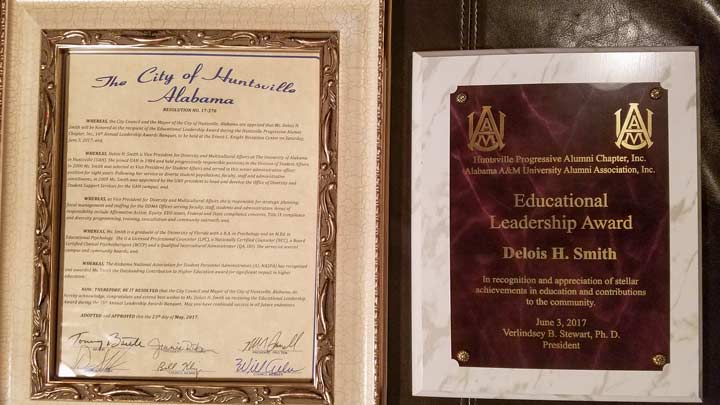 A summary of those community forums was also requested by and presented to the University of Alabama System Board of Trustees in their education session in 2016.

"It is very validating and rewarding to be recognized for the work you do and to know that it is making a difference," she says, adding that diversity involves development of an ongoing consciousness rather than being a destination.

"We often think diversity is only about race, but it is culture, ethnicity, age, gender, individuals with disabilities, sexual orientation, equity, and many other underrepresented and underserved individuals and populations," she says.

Smith says UAH is committed to diversity and inclusion, as evidenced by these key tandem tenets stated as one of the three core values of the university, "We honor the individual. We celebrate differences and use them to create unity."

"How remiss we would be as a university if we prepared our graduates to be tomorrow’s leaders, but did not prepare them to be world citizens," Smith says. "Our 8,500 students, 319 faculty and over 1,000 staff hail from all 50 states and 84 countries. We embody diversity, as well we should, and we continually hone our skills within the university through everyday interactions."

Recently, the ODMA conducted a campus climate survey to assess the needs of the university specifically related to diversity and inclusion. Campus participation was robust and informative, with nearly 1,000 respondents.

"This quintessential feedback will be used for strategic planning and continued growth and change where the UAH community has aptly directed our focus," Smith says.

Upon the creation of the Office of Diversity in 2009, Smith was appointed by the UAH president as vice president for diversity and chief diversity officer to develop the Office of Diversity and Student Support Services for the campus. That office later became ODMA. The position was created with an emphasis on community outreach and service, campus training and teaching on diversity issues and concerns, equity, affirmative action, Title IX and Equal Employment Opportunity concerns.

Smith is involved in direct diversity leadership and service to Huntsville and Madison County and works and serves on many university and community leadership boards and committees. She is a licensed professional counselor, a nationally certified counselor, a Board Certified Clinical Psychotherapist and a Qualified Intercultural Administrator.

She graduated from the University of Florida with an undergraduate degree in psychology and a master's degree in educational psychology.

Her ongoing work in diversity and inclusion coexists with an evolving campus, state and nation, Smith says.

"Demographers and researches remind us that we are changing as a nation, and that by 2044 the U.S. will be a majority-minority nation," she says. "Those who come to us, and those we actively recruit to join us, will come from this changing demographic. We must continue to prepare for, reflect and actively engage this demographic shift."