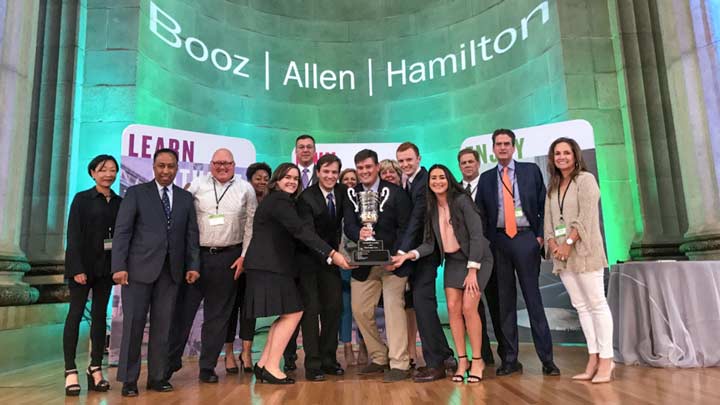 A team of Booz Allen Hamilton interns that includes Ryan Fernandez and Catherine Henderson, two engineering students at The University of Alabama in Huntsville (UAH), won the firm’s 2018 Summer Games with their entry, an unmanned aviation system dubbed "the Yellowhammer."

Established in 2014, the Summer Games is a 10-week internship program that simulates a real-world startup accelerator. This year, roughly 400 interns worldwide were selected to participate, divided into 82 teams across 23 U.S. cities, and tasked with solving client-focused challenges under the mentorship of Booz Allen’s senior leadership. The program culminated in a series of pitch sessions to a panel of judges, similar to the television show "Shark Tank." Ten teams were then chosen to advance to the final round, and from there, one team was named the winner of the coveted Challenge Cup.

Though drones are not a new technology, the Yellowhammer was able to take the top spot because of its ability to integrate machine-learning algorithms and intelligence capabilities while still being transportable and easy to assemble. "Customized drones could be used for search and rescue, disaster relief operations, firefighting, and more," says Fernandez, an electrical and computer engineering major. "No matter who we’re helping, the Yellowhammer saves time, money, and – most importantly – lives." Not to mention, adds sophomore industrial and systems engineering major Henderson, "with a 3-D printed frame and print-on-demand replacement parts, the Yellowhammer is cost effective and can be snapped together in less than four minutes."

As the winners of the Challenge Cup, the project is now eligible for additional funding and firm support to evolve the Yellowhammer into an end-to-end solution designed to give military commanders an easy way to track real-time and open-sourced information about developing situations. Says Henderson of the experience, "winning was amazing, but the fact that we were able to design and create a product that can be used beneficially by others someday is what made the 10 weeks worth it."