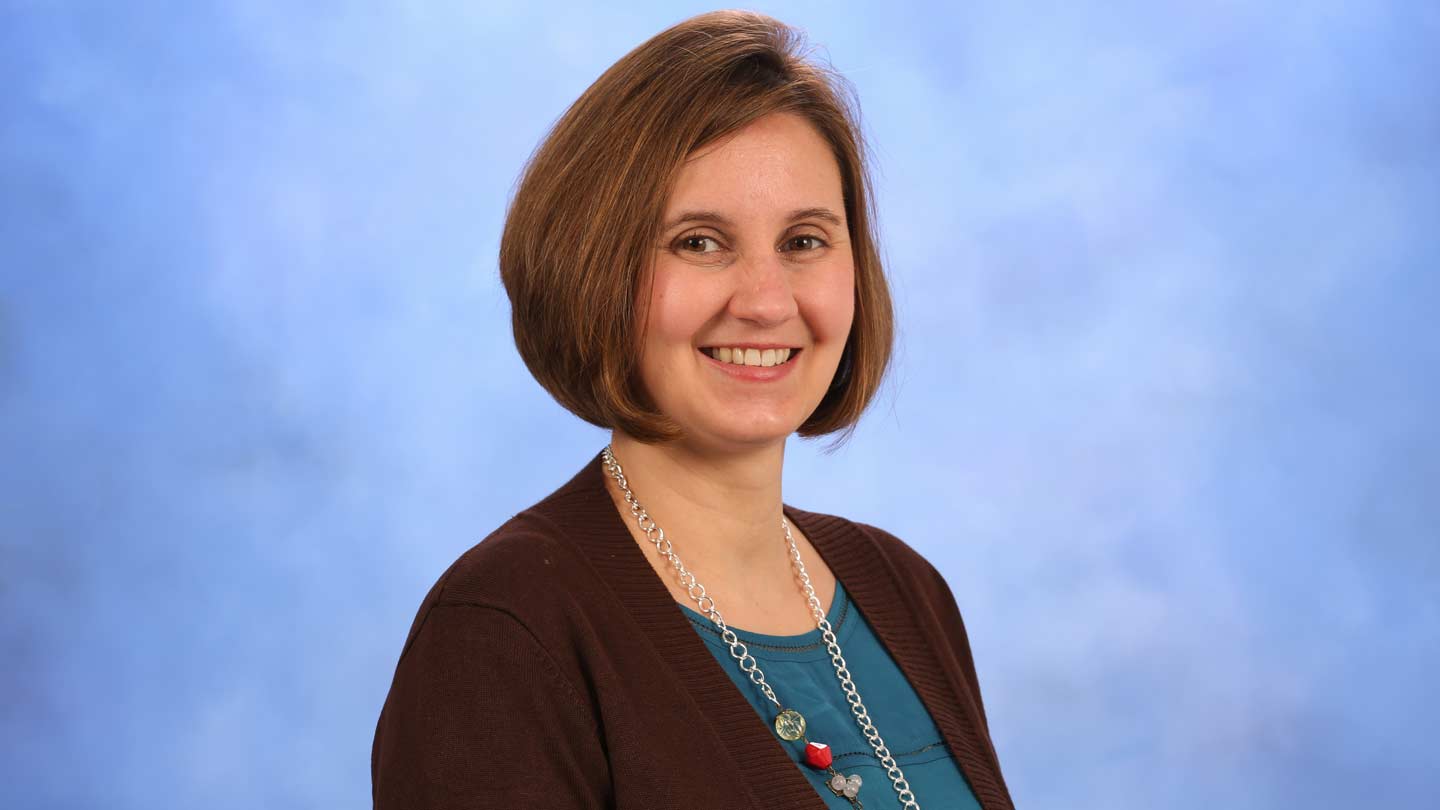 Dr. Whitney Meade is an assistant professor in UAH’s College of Education, where she leads the autism spectrum disorder graduate program.

When Dr. Whitney Meade was 17 years old, her high school sociology teacher took the class to tour the King's Daughters' School, a residential facility for individuals with developmental disabilities. His goal was to show those students who weren't going to college the types of jobs they could still aspire to without a degree. But even though Dr. Meade was already planning to go to college - and would eventually earn a Ph.D. in the field of education ­- the moment changed her life forever.

"I was fascinated," says Dr. Meade, now an assistant professor in the College of Education at The University of Alabama in Huntsville (UAH). "And even though I wasn't old enough, I had such a strong desire to work there." She ended up talking the facility's director into creating a special position for her, working there part-time on the weekends before eventually becoming a live-in house parent. "I went to college knowing what I wanted to be because I had this experience learning about what it looks like to care for someone for 24 hours a day."

As an undergrad, she spent her summers working at Camp ASCCA (Alabama's Special Camp for Children and Adults), which offers year-round therapeutic recreation for children and adults with both physical and intellectual disabilities. It proved to be another formative experience. "I learned so much more there than I did in my classes, and it influenced how I finished up my degree," says Dr. Meade. "Instead of choosing between K-6 or 6-12, I double majored and became K-6 and 6-12 certified for special education so I could work with both children and adults."

If a mom is being difficult, you have to take a step back and think when was the last time she slept through the night or had an hour to read a book? Because having a child with special needs changes the dynamics of the whole home.

Soon after she landed a job teaching elementary school in Birmingham ­- "That's where I had my very first kids who were diagnosed with autism," she says - before moving to Huntsville to lead the Autism Unit of Farley Elementary School. "It was a challenging experience and there were many things I learned," she says. Two years in, however, she realized that her calling had yet to be answered. "At that point I was thinking of becoming a special education director or coordinator and taking a supervisory leadership role," she says, "and I knew I couldn't change my circumstances with the degree I had."

So Dr. Meade returned to school, earning a Master of Arts in Innovative Leadership and Administration and accepting a position as a diagnostician and training consultant with Glenwood Autism & Behavioral Health Center in Birmingham. "From doing that job, I realized how much I liked teaching teachers," she says. "I could teach one teacher and their whole class was impacted, so I felt like I had a broader reach." Around the same time, she learned of a graduate program that would allow her to pursue a Ph.D. with a focus in autism.

"I don't think I knew exactly what I wanted to do at the time, but I'm kind of a school junkie, and so I went," she says. She created her own major in autism and behavior disorders with a minor in criminology - "I had to do some pitching to get that approved!" she laughs ­- and wrote her dissertation on whether or not law enforcement receives adequate training for interacting with special needs populations. "I contacted all 50 states and the answer was no," she says. "There's a minimum they have to adhere to and some choose to do more, but I had several states flat-out refuse to participate."

With her Ph.D. in hand, Dr. Meade returned to Huntsville, this time to work for the city's school system to develop a transition unit for students with autism. "We set it up using the best practices from autism, so the students were doing small group instruction, following visual schedules, things like that," she says. "And we would go out into the community every week, so they could learn life and pre-vocational skills like how to ride the public bus and follow multistep directions." She also began teaching part time at UAH, eventually transitioning to a full-time tenure track this past fall. 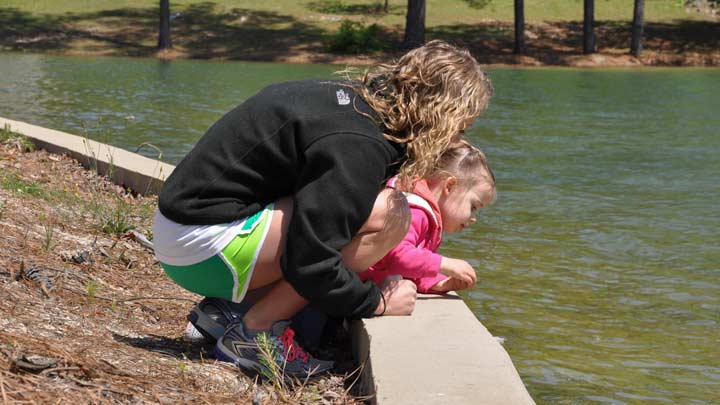 Camp Autism Smiles, which is run by Dr. Meade, provides outdoor recreational opportunities for children with autism and their families.

Now she leads the College's autism spectrum disorder graduate program in addition to balancing a full course load. "At the undergraduate level, I teach introduction to special education, collaboration and co-teaching, and applied behavior," she says. "At the graduate level, I teach introduction to autism, assessments for autism spectrum disorders, a clinical course in autism, and transition." Just as important as the curriculum, though, is the life experience that Dr. Meade brings to the class, both as a mother of two young children, one of which is enrolled at UAH's Rise School, and as someone who has decades of personal and professional involvement with families living daily with disabilities.

"The burn-out rate for a special education teacher is very high, and there's a push for everything to be academic-based when you know there's a group that doesn't need algebra ­- they need to know how to count 50 cents to get on the bus," she says. "So a lot of things I do with my college students now, I do so they can recognize that," she says. "If a mom is being difficult, you have to take a step back and think when was the last time she slept through the night or had an hour to read a book? Because having a child with special needs changes the dynamics of the whole home."

That's one of the reasons Dr. Meade uses her limited spare time to make a difference outside the classroom as well. Since 2008, she has organized and run Camp Autism Smiles, a family-friendly camp that provides outdoor recreational opportunities for children with autism and their families. Its purpose is twofold. "First, it gives kids with autism and their siblings an opportunity to experience an outdoor recreational event - very few kids with autism get to go to camp because most are not equipped to handle their needs," she says. "And second, it provides respite to the parents, who get the whole day off to do anything they like such as sleep, read a book, or go canoeing."

She also recently applied for and received a $5,000 cross-faculty grant with Dr. Melody Ng, associate professor of piano in the Department of Music, to determine whether music is a stressor or something that can help young people with autism. "We're going to invite a group of students to take piano lessons and look at their cortisol levels before, during, and after to see if they change with the music intervention," says Dr. Meade. "The plan is to write this up and publish it, and then use the baseline data to see what the next step is and how we can expand our research."

How does she do it all? "I have a really great husband," she says with a laugh. But more than that, she has the drive and desire to make a difference, first as a parent - "Of course I want the world to be better for my children," she says - but also as a person. "I read a fortune cookie fortune once that said to find your place to stand and change the world," says Dr. Meade. "Well, I can't change the world, but if I can make a future teacher just a smidge more compassionate or empowered, then I've made an impact." Which, in a way, is not so different from what her old sociology teacher did for her all those years ago.