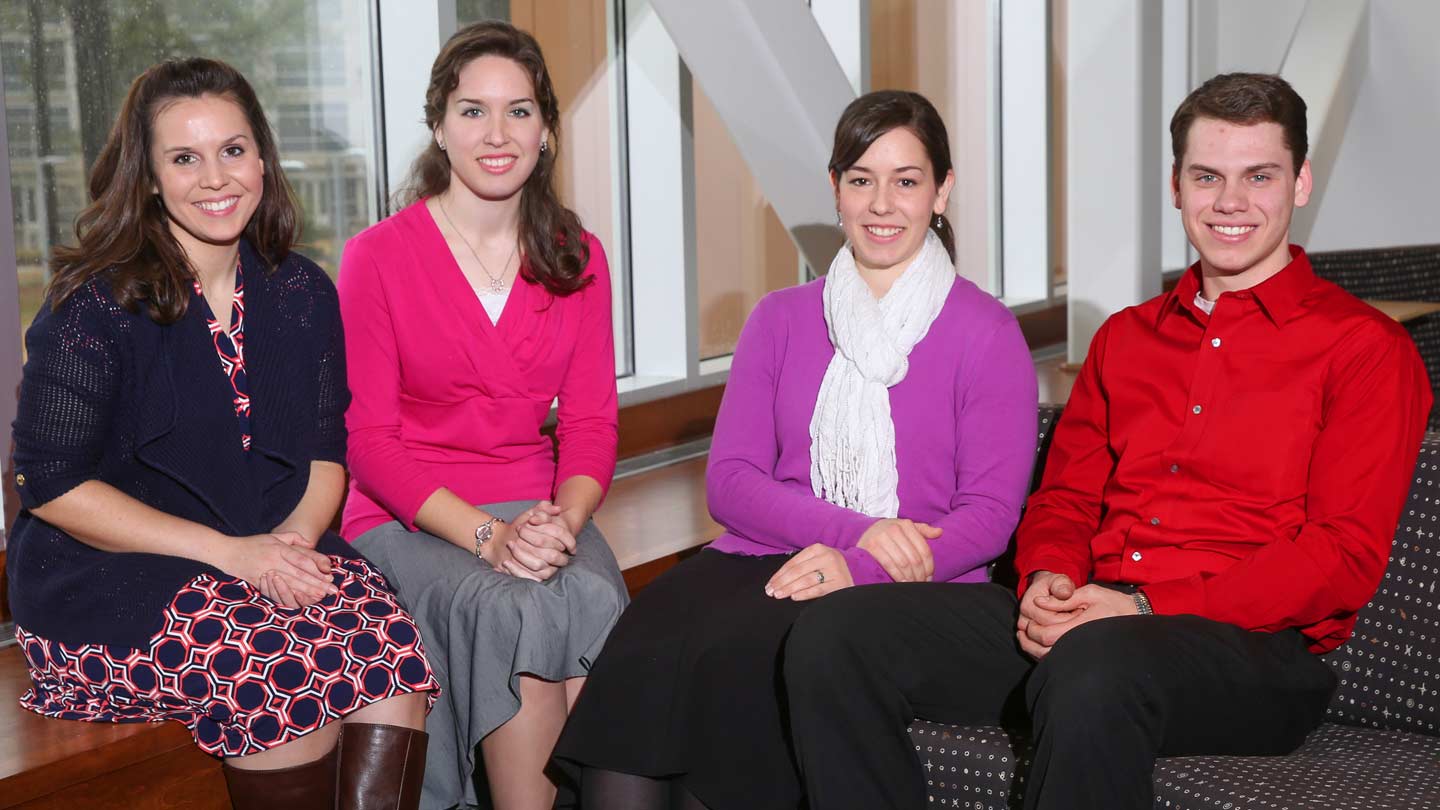 Patterson siblings Ginnie, Elizabeth, and Marie all attend UAH, while brother Joseph will begin classes in the fall.

It's considered a legacy when a child attends the same university as their parent or grandparent. But the Patterson siblings are creating their own single-generation legacy at The University of Alabama in Huntsville (UAH). Five have already pursued their academic career at UAH - Albert is a recent graduate; Ginnie, Elizabeth, and Marie are currently attending; and Joseph is enrolled for the fall semester. And as for the remaining four? "Most likely they'll go to UAH too!" says Ginnie.

Albert, the eldest son, can be credited with beginning the family tradition. "I have wanted to be an engineer ever since I can remember, so UAH was the logical choice," he says. After earning a bachelor's degree in mechanical engineering and a master's degree in industrial systems engineering, Albert landed an analyst position at Computer Sciences Corporation. "I was recruited and hired almost two months before graduation, and the company was willing to wait for me."

Ginnie was the next to attend, earning an undergraduate degree in accounting before deciding her senior year to stay on; she's now about to complete her master's degree in business administration. "I wouldn't have even thought of going anywhere else for my graduate degree," she says. "UAH feels like home and it's so familiar, but I'm also getting an accredited degree at one of the top business schools in the state."

Elizabeth followed soon after, opting to study industrial systems engineering. "I was always more of a technically minded person, and I love efficiency and organizing things," she says. Currently a junior, she's already been accepted into the university's Joint Undergraduate Master's Program, which will allow her to graduate with both her bachelor's and her master's degree in just five years.

Marie, a sophomore, knew when she arrived that engineering wasn't for her. "It's not in my blood," she says laughing. So she decided to go the business route like her sister Ginnie. "I chose management because I thought it was a good middle ground." And she chose UAH, she continues, not just because her siblings were already there but also because she knew it would be the perfect fit. "It's Southern, like us."

It’s been easier for us to fit in because people know the Patterson name.

Rounding out the quintet is Joseph, who will begin classes as an industrial systems engineering major come the fall semester. Like Albert and Elizabeth, his mind leans toward the technical - "I want to own my own manufacturing facility to do custom machining," he says - making his decision about where to go to school easy. Not to mention, of course, the family tradition. "Growing up, UAH is what you're used to," he says.

Perhaps the most incredible thing about the Pattersons, however, is not that they have all chosen to attend UAH. It's that they've managed to do so without incurring any debt. "We have zero student loans," says Ginnie. Instead each has received a combination of merit, presidential, and departmental scholarships that has allowed them to cover the cost of tuition.

Indeed, it was the only way that a stay-at-home mother and engineer father could ever afford to send their kids to college. And for the Pattersons, there was no question that they'd be going. "Our parents wanted us to be self-sufficient," says Elizabeth. So the siblings were all home-schooled, with special emphasis on the standardized tests that would determine their scholarship eligibility. "They spent every waking moment preparing us," says Ginnie.

As for any expenses not covered by tuition, on-campus jobs fill the gap. Ginnie is a graduate research assistant in the School of Graduate Studies, Elizabeth is a student assistant for the Alumni Association and a peer academic coach for the Student Success Center, and Marie is a student assistant for Graduate Studies. Albert, meanwhile, relied on a combination of jobs - including a 15-month internship with Boeing - to help pay the bills.

And aside from Albert, the Pattersons also live on their family's farm outside of the city to save money, though Elizabeth says the choice is as emotional as it is economical. "Our family life is so amazing that we don't want to give that up until we have to." But while they're expected to help out with chores - "Dad is the project manager, and we're the laborers!" she jokes - they still find time to take part in extracurricular activities. 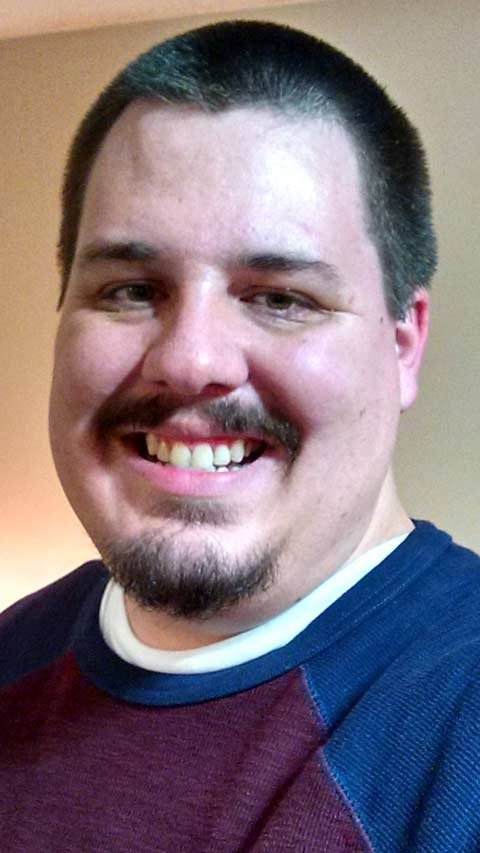 Ginnie, a former UAH Lancer, volunteers with SaveFirst, which helps low-income families prepare their taxes. Elizabeth, a current Lancer, enjoys reading and watching classic movies. And when she's not baking artisanal breads, Marie sings with her sisters in their church choir. "It's a challenge because we have to sing in Latin," she says. The three also take pride in the intricately fabricated knives that their brother Joseph makes, just one of his many hobbies. "I recently taught myself how to cut and polish rough gemstones," he says.

It all adds up to a full and happy life - one that may not have been possible had the Pattersons chosen to attend different schools. "It's been easier for us to fit in because people know the Patterson name," says Marie about life on campus. There's also something to be said for having a support system so close at hand. "If our car battery dies, we can call each other."

The benefits don't stop after graduation, either, as Albert can attest. Thanks to his two UAH degrees, he says he now has "the technical competence to do my job well, the ability to quickly learn things that are unfamiliar to me, and a degree of pride in all my work and professional dealings." In return, he's earned the respect of his colleagues and a reputation as "the guy who gets it done and done well no matter what."

And while he may not have intended to start a family tradition, going to UAH has proven to be "one of the best decisions of my life," he says. "From a supportive environment and excellent mentors to the freedom, support, and funding to do work I was interested in, UAH offered me the best choice for what I wanted to do."

As for whether he'll encourage the four youngest Pattersons to follow suit, he says he probably won't have to. "They wear UAH t-shirts around everywhere and like to tell people that they are going to college at UAH 'when I grow up'," he laughs. There's just one possible outlier - a younger brother interested in architecture, which isn't offered at UAH. But even then, the siblings have a plan.

"He can go to graduate school somewhere else," says Ginnie, "but we'll make him go to UAH first!"