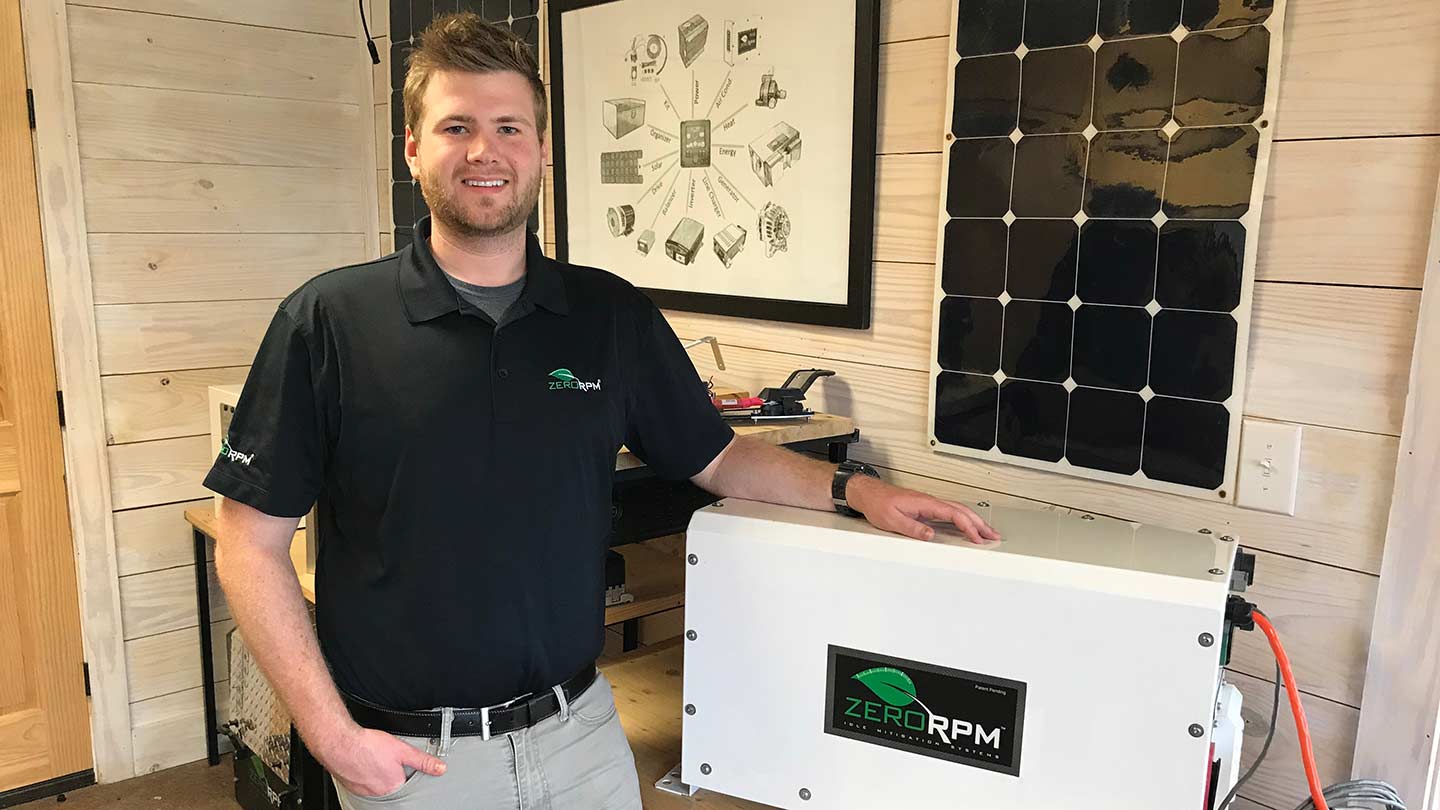 Landon Self says he has “received the rare gift to see a startup grow into a stable company.”

An innovative device that saves fleet vehicle owners fuel costs and cuts carbon emissions from extended idling is the basis for a company in which an alumnus of The University of Alabama in Huntsville (UAH) is the engineering leader.

“This is done by mitigating how often the engine must idle while at a job site to provide power to the heating and air conditioning system (HVAC), to onboard electronics like the radio, computers, etc. – and on utility company trucks, to power aerial devices – all while the engine is off,” says Self, a Cullman native.

The device differs from vehicle engine start/stop devices because it remedies the problem of long-term idling while parked, instead of focusing on the brief amount of time – like at a stop light – that the vehicle is in drive and idling, Self says.

“The IMS is specifically designed to address the time that vehicles spend idling on the job site while they are in park. Most service fleet vehicles – such as fire trucks, ambulances, bucket trucks, armored cars and U.S. Border Patrol vehicles ¬– spend more than half of their fuel budget while idling in park,” he says. “The IMS can reduce idling by 50-95 percent, depending on what system is used. Depending on the configuration, vehicles equipped with the IMS typically see a return on the investment in approximately two years.”

ZeroRPM recently won the Made in Alabama Corporate Innovator of the Year award in the small company category.

“Receiving the award was an enormous honor. It was a complete surprise that we were even nominated and we give thanks to Christ for it,” Self says. “Years of prayer, preparation and sacrifice have been poured into ZeroRPM by every employee and their families, and by our community. Receiving the Made in Alabama Corporate Innovator of the Year award felt like a badge of honor for the years of hard work it had taken to establish the company as the market leader in idle reduction technologies.”

Established in 2012 and based on an idea to drastically reduce the idling cost and carbon footprint of jobsite vehicles, ZeroRPM began in a small Cullman shed developing initial design concept models and has grown ever since.

In 2013, Self began to work at ZeroRPM “because there was an opportunity to work with my dad and learn a lot, and as a college student, I was also eager for some spending money.”

He spent his first 3-1/2 years at UAH in on-campus housing to keep focused on coursework, but he worked and spent time with family each weekend.

“The opportunities to work on the weekends and late nights soon grew into a career and a journey where I have received the rare gift to see a startup grow into a stable company. For my final year and a half of schooling, I commuted between Cullman and UAH to complete my degree; it wasn’t easy, but it was worth it,” Self says. “By staying on campus for my first 3-1/2 years and commuting the last year and a half, I was able to finish my degree in five years and secure a career once I finished. The process of working, taking classes and balancing home life took prayer and hard work, and it has built the character that I will have for a lifetime.”

His role at ZeroRPM has evolved as the company has grown, Self says.

“When the company was incorporated in 2012, I was a sophomore and had completed my CAD (Computer Assisted Design) class at UAH. This allowed me to start my engineering career by drafting and modeling. As we began to acquire a customer base I moved to product design.”

By 2013-2014, he had completed most of his UAH foundational engineering classes, which Self cites as equipping him to better understand manufacturing processes, mechanics of materials and vapor compression cycles.

Self notes that in 2013, then UAH Student Government Association President Nandish Dayal (BS, Nursing, May ’15; MS, Nursing, Dec. ’16) helped ZeroRPM gain insight into the possibility of college campuses using its technology. “We appreciate his open mind and the opportunities he presented to us.”

His senior year at UAH was in 2015, and “at that point ZeroRPM was gearing up to ship product in volume. When I graduated, I was able to lead a team of engineers to commercialize our product suites to make them manufacturable,” Self says.

“Now, I primarily develop processes; help in the design of marketing materials; and manage our products’ mechanical development, commercialization and manufacturability. My ME degree has been a great starting point for my career for both the technical knowledge and soft skills that I acquired during my years at UAH.”

The company continues to innovate as it finds new uses for its core technology, he says.

“Our team is constantly working on products and solutions that broaden the applications for which our technology can be utilized. We have had great success with our partner in the utility market and are now working on solutions for ambulances, fire trucks and armored cars. All of these are exciting opportunities for the future of ZeroRPM.”

UAH’s College of Engineering taught him about more than equations and facts, Self says.

“I feel that it is incredibly important to be a problem-solver, and UAH’s engineering program taught me how to become one. Assess the issue, define all the variables you can, make assumptions on the ones you can’t, compute, learn and repeat. I use this process daily at work and at home; it has been a priceless piece of my education from UAH,” he says.

“As far as technical ability, UAH’s CAD classes gave me an advantage when ZeroRPM started because we were able to design parts more accurately in 3D than if we had to fabricate parts by hand. Also, when you go into the job market, a degree from UAH holds a lot of weight. People respect the accomplishment of an engineering degree from UAH.”

He says current students should always keep their eyes and attitudes open for opportunities.

“I would like to encourage college students that if you see a once-in-a-life-time opportunity, and if all that is separating you from it is hard work, then you should take it. You won’t regret it,” Self says. “As a Christian, I firmly believe that if God gives us a chance to do something greater, we should take it. Have faith, work smart, work hard and be willing to learn.