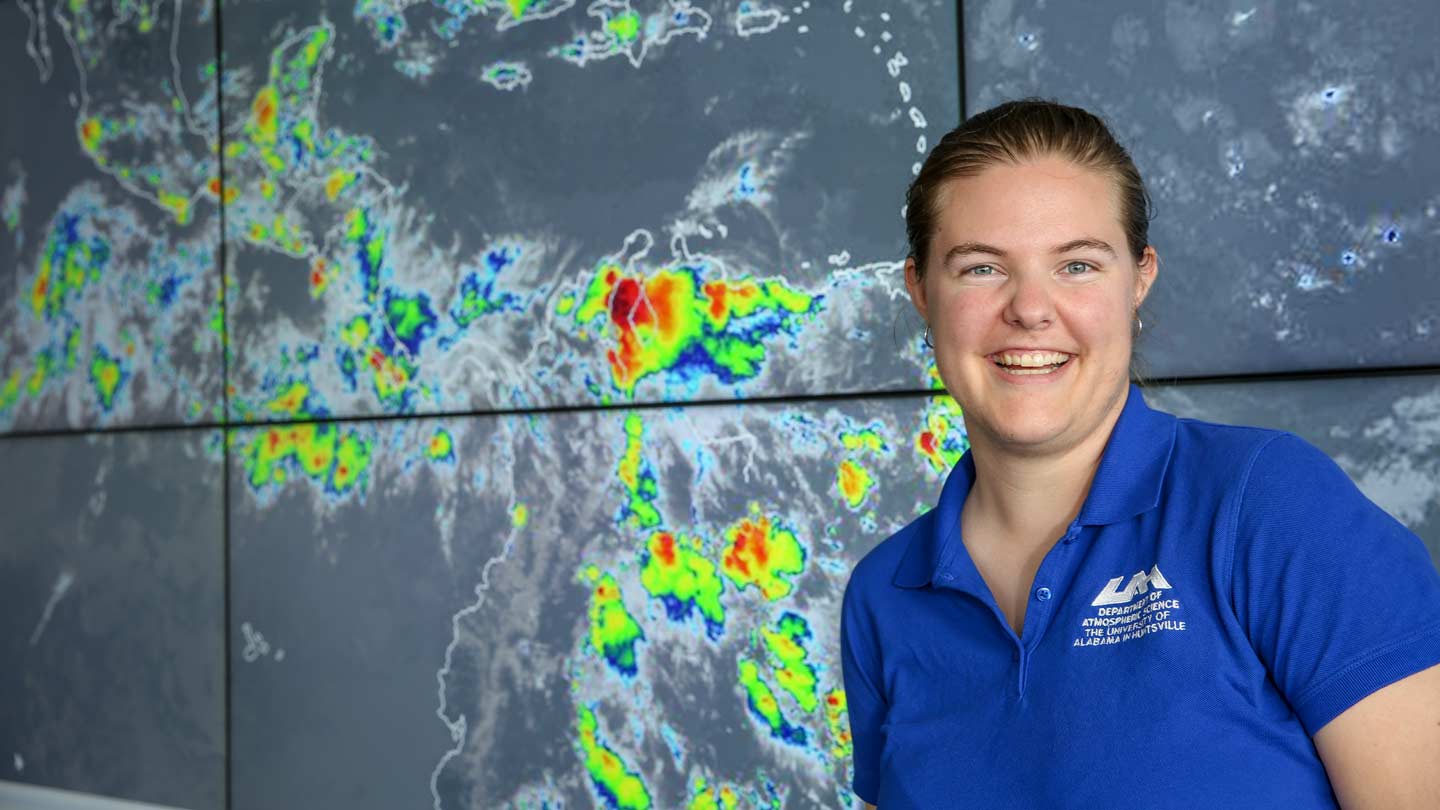 While the threat of severe weather may strike fear into the hearts of most people, Lena Heuscher is not most people. In fact, as a Ph.D. candidate in the Department of Atmospheric Science at The University of Alabama in Huntsville (UAH), she sees the arrival of high-impact events as an opportunity to learn more about how they can be characterized to improve prediction models and better protect both life and property. "I have always enjoyed the weather – all weather," says Heuscher, who grew up in the small town of Choteau, Mont. "Living in a rural community where agriculture is the main part of life, it was easy to see the devastation caused by weather. Whether it’s a hail storm wiping out farmers’ crops three years in a row while the other fields remain untouched or a 100-year flood sweeping by and changing people’s lives forever, it becomes very real."

After graduating from Montana State University with a bachelor’s degree in physics, Heuscher earned a master’s degree from the University of Nebraska-Lincoln, where she conducted research on hail variability in supercell storms and its response to environmental variables. Here at UAH, however, her focus is on lightning, and in particular, using satellite-observed lightning and precipitation processes to develop markers for extreme storms. "Because there are a lot of different definitions of extreme storms, I’m trying to see whether or not there is a characteristic that is unique to them by looking at lightning from space," she says, suggesting an increased flash rate or density as possible examples. "But I want my research to be application-based, because if you can quickly identify whether or not a storm is extreme, then you can better prepare and get those warnings out."

If you can quickly identify whether or not a storm is extreme, then you can better prepare and get those warnings out.

Essential to Heuscher’s research is the Geostationary Lightning Mapper (GLM), an optical transient detector that is kept in geostationary orbit by the GOES-16 satellite, and the Lightning Imaging Sensor on board the International Space Station (ISS-LIS). While previous space-based studies of lightning distribution with respect to tropical convective precipitation systems have been limited to data collection in a narrow belt ±38° from the equator, these two instruments provide information from pole to pole. The GLM also takes continuous measurements instead of 90-second snapshots, giving Heuscher the ability to document and analyze the evolution of lightning within extra-tropical cyclones traversing the mid-latitudes.

"The extension of lightning observations through brand-new datasets like GLM and ISS-LIS has the unique capability of looking at the combined data from space-based microwave radiometers, radar, and lightning observations up into the high latitudes," she says. "These datasets, along with global precipitation data, will help us define ‘extreme’ precipitation events regionally across the globe." They will also enable scientists like her research advisor, Dr. Walt Petersen, an adjunct faculty member and research physical scientist at NASA Marshall Space Flight Center, to look at the distribution of convective precipitation across the planet and gain insight into processes that are happening in convective cores globally.

This groundbreaking approach has already garnered attention from the American Geophysical Union (AGU), which recently awarded Heuscher the Dr. Edmond M. Dewan Young Scientist Scholarship for Atmospheric Sciences and Space Physics. According to Joshua Speiser, strategic communications manager for the organization, she received the highest possible reviewer scores on her application, with one judge calling her proposal "excellent" and citing her clear goals and testable hypothesis. "The AGU was excited to award Lena with this year’s scholarship," he says, "and we look forward to seeing her present her research on lightning observations at a future AGU meeting."

Now she’s hoping it will catch the eye of a potential employer as well, either here in the U.S. with a federal agency like NASA or overseas with an organization like the Japanese Aerospace Exploration Agency. But no matter where she ends up, Heuscher’s goal remains the same as it was when she first decided to pursue a career in the field – to give those at the mercy of extreme weather both a better understanding of what they’re up against and a fighting chance for survival. "I want to lay the groundwork for creating lightning data applications that have far reaching impacts," she says, "and help improve short-term prediction for these high-impact events in countries that have more limited data and processing resources."