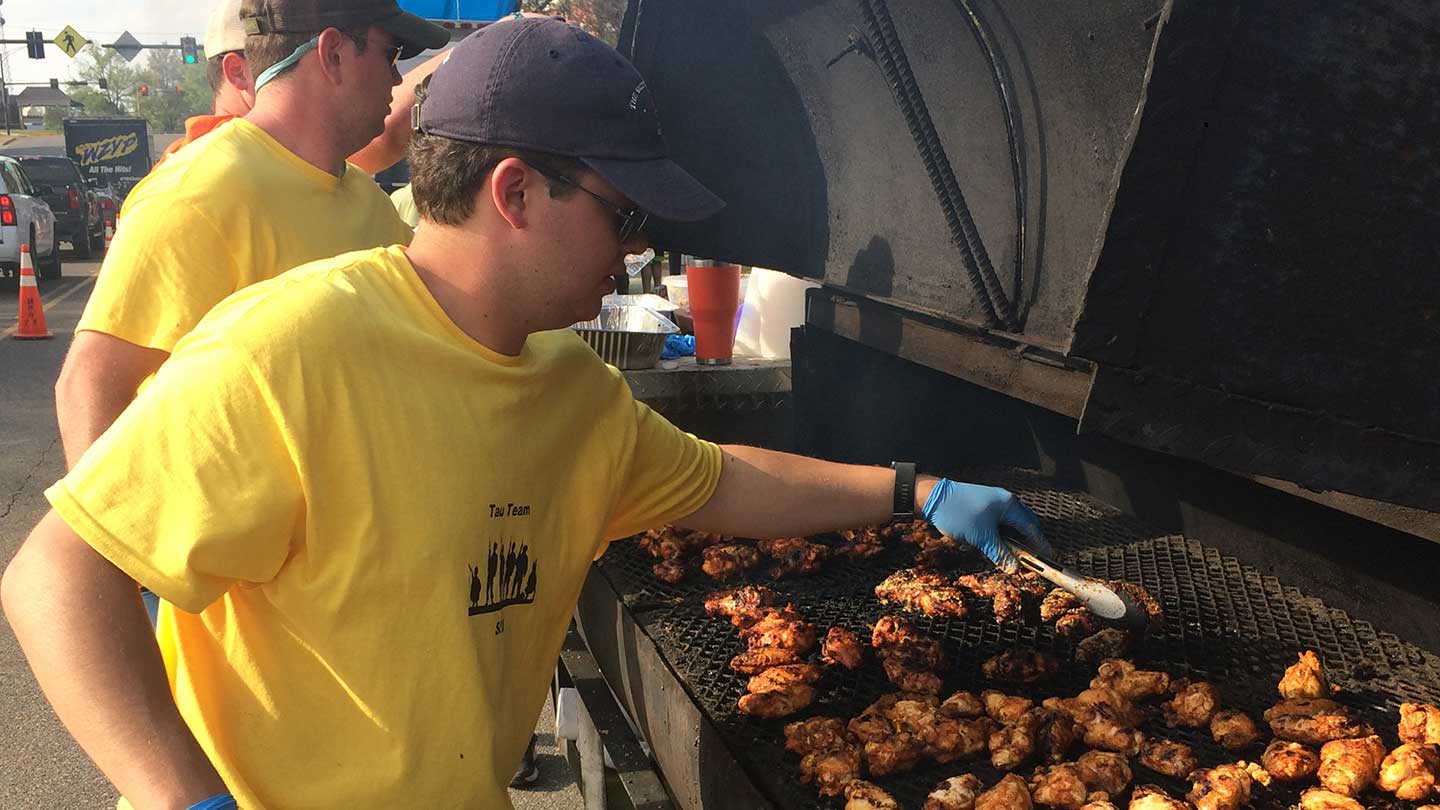 Bobby Marsh helps with grilling chores during The Battle of the Buffalo, an annual chicken wing festival organized by the UAH chapter of the ATO fraternity. The event began in honor of Paul “Fish” Salmon who passed away in 2007 with leukemia.

Bobby Marsh has been interested in politics since the eighth grade when he ran for student body president.

He ultimately chose UAH because it felt like home. But he never intended to enroll in the university. "All through high school, I told my family and friends there was no chance of me going to UAH because it was simply too close to home," Marsh said. But in one smooth move, his mother convinced him to attend just one UAH open house before committing to another institution. The next thing Marsh knew he was a member of the Charger Nation. "The students and faculty truly make you feel like you are joining a family and the opportunities both on campus, and around Huntsville, are endless." 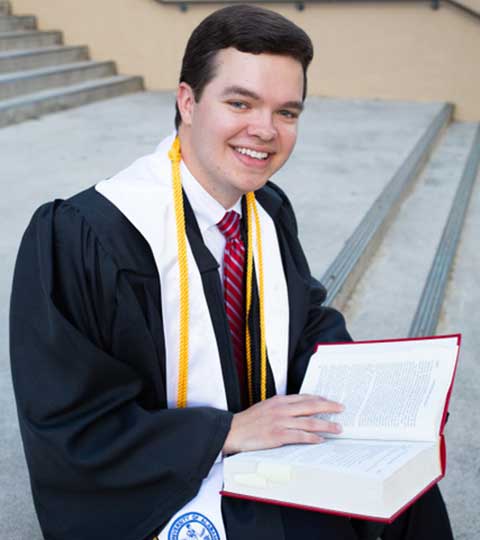 Bobby Marsh, who graduates from UAH on May 2, with a Bachelor of Arts degree in Political Science will be the first lawyer in his family.

During his sophomore year, a law school admissions director gave him some priceless advice that changed the course of his college career. "She said law schools do not care as much about what you studied as an undergrad as much as they do about the grades that you made. The best way to make high grades is to study something you enjoy learning about," said Marsh. "This led me to pursue my passion for politics and learn more about governments and their influence on policy decisions. My grades have continued to rise since making the switch."

Marsh sums up his four-year UAH experience with two words: incredible and challenging. "Our professors challenged us but were always welcoming and available. One of the most challenging yet fulfilling courses for me was the "Contemporary Political Philosophy" class taught by Dr. John Harfouch, UAH Assistant Professor of Philosophy and Pre-Law Advisor.

"After spending many hours in the library and making multiple trips to see Dr. Harfouch during his office hours, I was able to finish the semester with one of the best final grades in the class," said Marsh.

Harfouch has since written Marsh a letter of recommendation for law school and provided countless pieces of advice as he prepares for the next step in his academic journey. "This experience taught me of the value of working hard and not being afraid to ask questions, a lesson learned again and again during my time at UAH."

Last year, Marsh had the rare opportunity to work as a paid intern for one of the most prestigious personal injury law firms in North Alabama, Siniard, Timberlake & League.

During his time as an intern, he met with clients to hear their stories and experienced the complexities of the legal system with them. "My role at the office seemed to change daily. Most of my time was spent in client meetings or listening to phone calls and taking notes while my mentors taught me lessons about how the law is applied in real life situations," Marsh said. "I am extremely grateful that the attorneys at the office always met my seemingly endless supply of questions with a patient response. They seemed as excited to teach as I was to learn."

Marsh made such an impression during his limited internship; he became the firm’s head office runner. The position placed him in a managerial role, overseeing all of the firm’s runners.

"In terms of how this experience relates to my political science education, I would venture to say that the areas of law and political science could not be more connected," said Marsh. "I remember sitting in Dr. Andree Reeves's American Government 101 course and learning all about the responsibilities of the judicial branch and the power it has over the legislative and executive branches. Reeves is an Associate Professor in the UAH Department of Political Science.

"My time at Siniard, Timberlake & League has not only provided me with experience in the field of law and trial advocacy, but it has also provided me with mentors who have shown how to practice law the right way by keeping the best interests of their clients at the forefront of their work," said Marsh. "It is my dream to develop the type of relationships with my clients that I have seen my bosses build day in and day out with the people that they represent."

School-Life balance for Marsh has not been easy. He has been "fortunate" to take part in just about every sector of student life on the UAH campus, from Greek life to athletics to the Lancer program. "Time management has been one of my greatest challenges during these past four years," said Marsh. "Extracurricular activities offer a set of skills and experiences that cannot be taught inside a classroom. Early on I had to learn how to create a disciplined schedule to balance meetings and homework assignments, but I would not trade these experiences for the world," he added.

The Battle of the Buffalo an annual chicken wing festival organized by Alpha Tau Omega (ATO) fraternity is one event he always made time for. "The event began in honor of Paul "Fish" Salmon who passed away in 2007 with leukemia. What began as a small gathering at the UAH Shelby Center has grown into the ‘largest wing festival in the southeast’," he said. Local restaurants and amateur cooks compete against each other to see who has the tastiest wings in the Tennessee Valley. All of the proceeds from Battle of the Buffalo fund cancer research efforts at the Russell Hill Cancer Foundation and the Hudson Alpha Foundation. "So far, the event has raised over $160K for these two organizations as ATO continues to support cancer patients undergoing cancer treatments," Marsh said. Previous donations have gone towards iPads for every chemotherapy chair (for infusions) at Russell Hill and blanket warmers for patients.

In August, Marsh will begin his studies at The University of Mississippi (Ole Miss Law) in Oxford, MS. "On my first tour of Ole Miss I couldn’t help but feel the same inviting atmosphere that had made UAH such an obvious decision four years ago."

Marsh said that in addition to the authentic community that exists among the students and faculty at the law school, the university was very generous with scholarship offers. "I cannot wait to begin my new chapter at Oxford this fall."

As Marsh reflects about the career path he has taken, he clears up misconceptions about the makeup of the student body at UAH. "Most people tend to think of engineers and scientists… While it is true most of the UAH campus is devoted to Science, Technology, Engineering, and Mathematics (STEM) fields and that these areas of study seem to assure a comfortable career, I would encourage students to consider the benefits of earning a Liberal Arts degree," he said. "A degree in the humanities provides tools that will be of value in any career field or practice area. These skills include the ability to think critically and synthetically, conduct thorough investigations and communicate efficiently and precisely through a variety of mediums. Such knowledge and practical experience will open doors and ensure your competitiveness in today’s global economy."