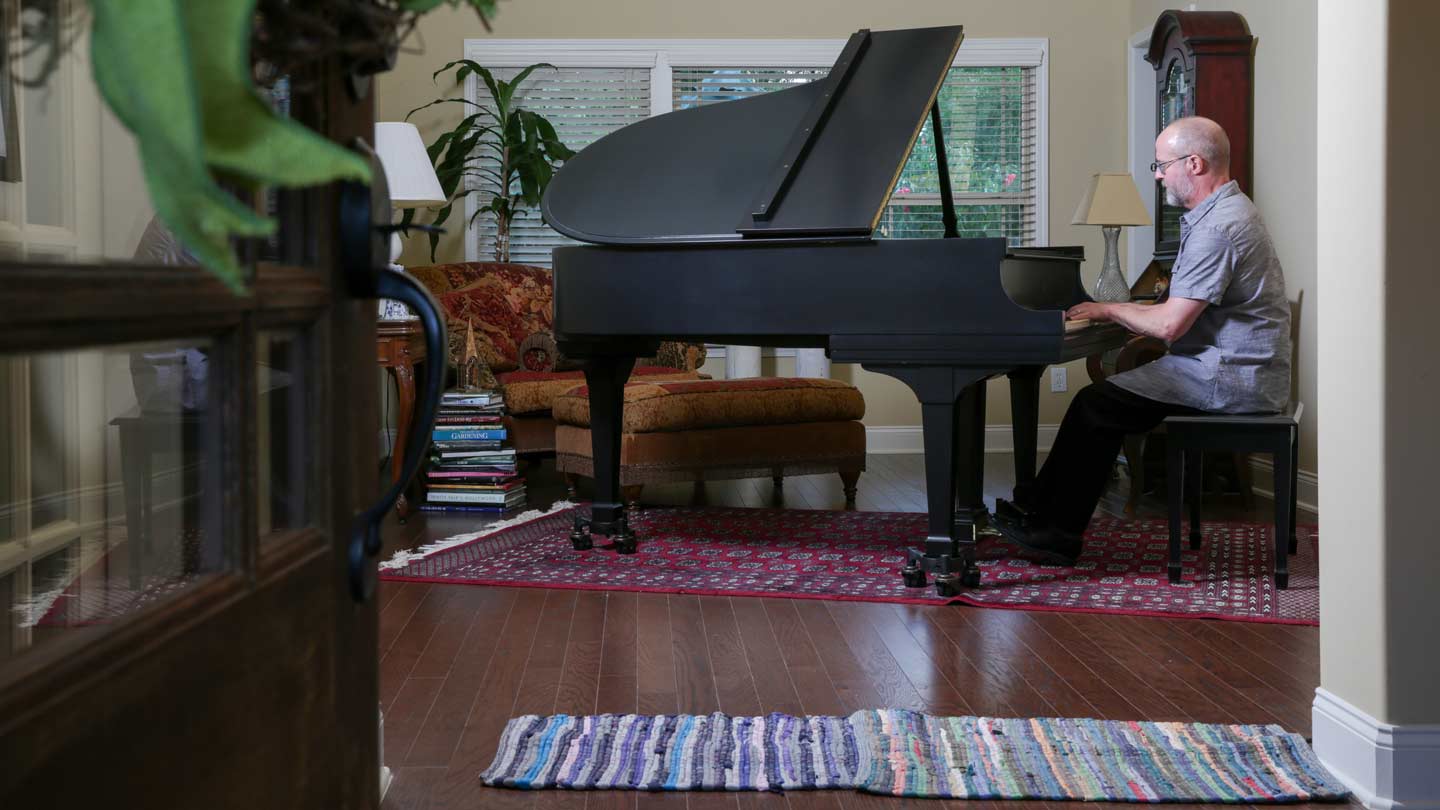 “It was his response to COVID-19, wanting to give something back to others…music is what Ron had to give, and he gave it.” – Dr. Susan Luther

Navigating challenging times can leave some feeling helpless, even temporarily hopeless, when weathering difficult situations beyond their control, such as the current pandemic.

A member of The University of Alabama in Huntsville (UAH) Department of Music Staff, UAH Arts Coordinator/Staff Accompanist Ron Guthrie, recently came up with a great way to help his friends and neighbors combat those feelings, while keeping his artistic skills sharp: he decided to give two outdoor piano recitals from his front porch in Owens Cross Roads, Alabama.

“After staying home for several months due to the pandemic, I was worried about losing my pianistic ‘chops,’ itching to perform again, and looking for a passion project,” Guthrie explains. “As Beth Fletcher, my mentor during my time at Trinity Church, taught me: It is vital to always have a ‘passion project’ in the works, especially through dark or seemingly non-productive times.”

The passion project Guthrie spawned not only served to keep his fingers and musical abilities nimble, but also provided joy and solace to his neighborhood.

“Once I thought of it, I knew I had to do it!” he says. “I never would have guessed this experiment would work like it did! I played my Steinway inside and piped out the music to a speaker on my front porch. I was concerned that I would find it distracting and ultimately damaging to my performance to be so separated from the audience, connected only by a microphone inside and a loudspeaker. However, I experienced the opposite of distraction. There was no distance or separation. Instead, I was deeply connected and moved, sharing with new friends this beautiful music on this perfect evening. It was oddly, profoundly intimate!”

Prior to moving to Huntsville, Guthrie was on the liturgical staff of Trinity Church Wall Street in New York, serving as Verger and the Site Manager of St. Pauls’ Chapel.

“We were in New York, and my wife, Susan Hazen Guthrie, was working all over the country as a theatre teaching artist,” he says. “Eventually, she landed a long-term residency in Huntsville and really liked it here. We had moved to New York for my work, so this time we moved to Huntsville for her work.”

He has since come to love North Alabama and his new home. After working several years as a part-time contracted accompanist for the Department of Music, Guthrie became the new Arts Coordinator/Staff Accompanist in June 2017. He came up with the idea of providing his neighborhood with a concert as a way of giving to his community in a time when serenity and the simple pleasures of life are at a premium.

“Susan and I are one of fifty-five families in the Park Hampton Homeowners’ Association in Owens Cross Roads,” Guthrie says. “Very few of us know each other, and we rarely connect beyond a ‘hello,’ if even that. I thought with these mini-concerts, I could give myself something creative and valuable to do and give my neighbors a reason to get out (masked and distanced, of course!) to share a soul-feeding communal experience.”

Guthrie’s longtime friend, Dr. Susan Luther, a former instructor in the UAH English department, was excited to be in attendance.

It was his response to COVID-19, wanting to give something back to others…music is what Ron had to give, and he gave it.

“I met Ron’s wife, Susan Guthrie, at a coffeehouse reading by the Coweeta poets in 2010 at UAH,” Dr. Luther says, a group they still belong to. “She introduced my husband Bob and me to Ron. We've all been friends since. Susan emailed me the invitation Ron and she had posted to the neighborhood. I think that as much as anything it was his response to COVID-19, wanting to give something back to others in this time not only of anxiety and confinement, but of closed concert and recital venues. Music is what Ron had to give, and he gave it.”

Guthrie took special care to select the pieces he performed for the two recitals.

“I wanted to keep the program accessible and enjoyable for all ages and musical tastes,” he explains. “I couldn’t know what to expect. Audience members might bring lawn chairs and stay, or they might stop by for a moment, or they might sit in their cars. So no piece was longer than five minutes. The programs included some Spanish music, some French music, two American rags, some hymn arrangements…hopefully, something for everyone.”

The recitals were provided on consecutive Friday and Saturday evenings, and the weather cooperated to combine for an enchanting listening experience.

“We sat outside in lawn chairs and reveled in the music of Debussy, Granados and Joplin first; Bach and Ginastera in the second program,” Dr. Luther says. “Across the street a father listened in his driveway while his toddler ran back and forth around him. Others walked, biked, or just happened in, some being neighbors who were meeting for the first time.”

Asked what was it like to enjoy such a gorgeous repertoire outdoors, Dr. Luther responds, “Being outdoors in such an intimate setting with that music, and with others who love music – none of whom we knew except the Guthries – helped me feel human again! Ron's music offered far more than beauty alone; it was like receiving an infusion of hope.”

Despite being indoors during his performances, Guthrie says he still managed to have a wonderful awareness of his audience listening around the neighborhood.

“Oh yes! My across-the-street neighbor (to whom I had never spoken until that night!) sat at the end of his driveway, listening along with his toddler daughter, who sat in her own mini lawn chair. When it was over, he called over a big thank you and shared how much his daughter loves music. A couple days later, I received a thank-you note from an elderly couple, letting me know…because of COVID concerns…they had listened and enjoyed from their porch on the next street over.”

Dr. Luther provides a delightful coda to how the recitals were received, noting as well how Guthrie’s performances were particularly timely and restorative:

“The first night, a robin sang along; the second, their cat Henry provided a descant [a melody independent of the base melody] – and the weather was perfect. Both evenings, we enjoyed a palpable sense of community – even communion – that’s been hard to come by lately. Their neighbors agreed that it would be good if such gatherings continued. The last two selections our generous friend played were arrangements of ‘Now Thank We All Our God’ and ‘It Is Well with My Soul.’ Amen!”