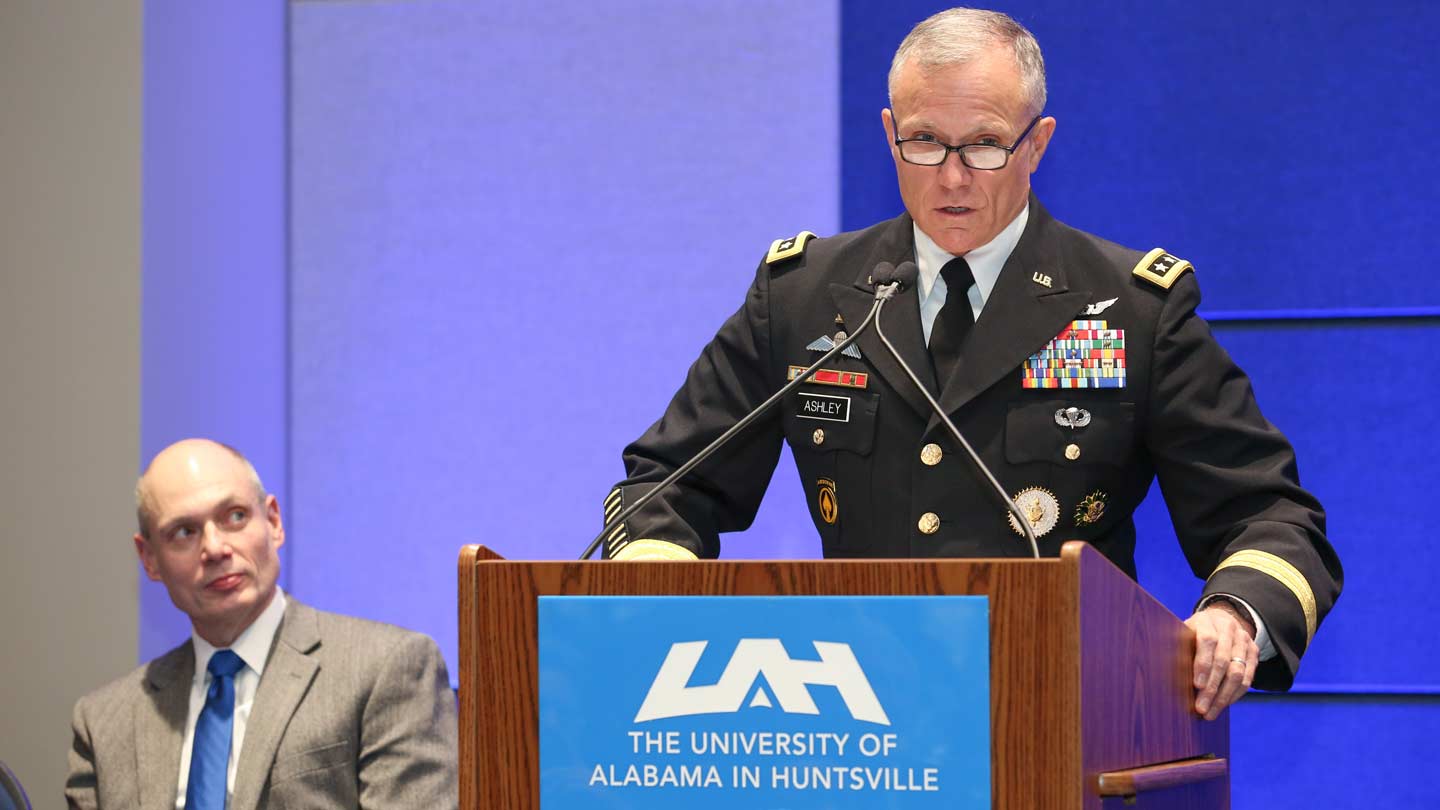 Defending the United States in the increasingly crowded and complex environment of space is both critical and complicated, Lt. Gen. Robert P. Ashley Jr., director of the Defense Intelligence Agency (DIA), told an audience of defense, community and university leaders Thursday, Aug. 8, at The University of Alabama in Huntsville (UAH).

"Can you imagine where we might be in 50 years?" Ashley asked, noting that it took only 66 years from the first flight at Kitty Hawk, N.C., to humans landing on the moon.

Currently, 13 nations have space launch capability, with India the newest member, and the prospect of space as a battleground grows more real as time passes. With 21,000 objects in Earth orbit, space grows increasingly crowded.

"Now, we face a more competitive and dangerous period than I’ve seen in all the time I’ve been in uniform – in 35 years," Ashley said. "Competition has spread into space – into what was peaceful space."

Ashley spoke at UAH as part of the university’s Distinguished Lecture Series. The series brings nationally recognized guest speakers to Huntsville to enhance community collaboration and assist the development of Redstone Arsenal. It fosters better understanding of current events and future trends, how they impact the federal organizations at Redstone and how they could influence U.S. reaction to world events and the nation’s future exploration, discovery and technological development.

On Oct. 3, 2017, Ashley became the 21st director of the Defense Intelligence Agency. He formerly served as the U.S. Army’s deputy chief of staff, where he was the senior advisor to the secretary of the Army and Army chief of staff for intelligence, counterintelligence and security.

"I think it makes sense to have a command that is focused on space from a combatant standpoint," he said.

The treaties governing space were enacted in the 1960s and 1970s, and Ashley said that framework is being strained by current events.

"When these arrangements were being made, space was a benign region for scientific research and collaboration," he said. "When we think about the regulations that define space, there is no definition of what is a weapon."

Pointing out technological aspects outlined in President Ronald Reagan’s proposed Strategic Defense Initiative, or Star Wars, that were not attainable in 1983, Ashley said most are possible today.

"Over the last 50 years, what was science fiction has now become science reality."

Since Reagan’s proposal, U.S. adversaries have developed lasers, railguns and particle beam weapons under computerized control, as well as a range of cyber and electronic warfare options.

Part of the DIA’s role is to assess the near-term threats and develop long-term projections about activities in space, Ashley said.

"We provide the scouting report of our adversaries," he said. DIA personnel "inform policy, they are not informed by it, and there’s great tradecraft and professionalism behind that."

The effort includes DIA "red books," which have released information about the military power of the two primary U.S. adversaries, Russia and China.

Ashley characterized current Iranian and North Korean space activities as "aspirational." Of the two primary U.S. adversaries, he said China is currently in the lead in hypersonics, as well as in the development of space assets and cyber and electronic warfare.

"China is a learning superpower, and they are adapting in how they deal with other nations," Ashley said.

"They see outer space as a critical area of competition," he said. "They have made huge investments. They had more space-oriented operations in 2018 than any other country. They continue to make huge investments in hypersonics."

China has launched 11 satellites as part of its Global Positioning System (GPS) constellation this year alone, Ashley said, and it is working to integrate cyber warfare and electronic warfare in order to disable the satellites of opponents.

Surveying the diplomatic, military and economic components of power, Ashley said China is moving forward with international economic ties in order to later facilitate military bases, utilizing its Belt and Road Initiative to build infrastructure that is militarily crucial and using science and technology research for military ends.

Russia is working in the artificial intelligence and cyber sectors in order to control its own weapons systems and to jam the control of opponents over theirs, Ashley said. One goal is to use automation to take humans out of the loop, which he said has considerable inherent risks.

The Russians are also developing their own GPS system. The Russians successfully tested a railgun in 2018.

"They believe supremacy in space is the key to any future conflict," Ashley said.

The key to military stability and adequate defenses in space will come down to sensors, Ashley said, and that is an area where the U.S. has an edge.

Yet another aspect of the space environment is private sector flights.

"Where will we be in 50 years? What will the private sector be doing? How much of a commercial presence will we see? How many sensors can we put up there, with thousands of objects in orbit now?" Ashley asked.