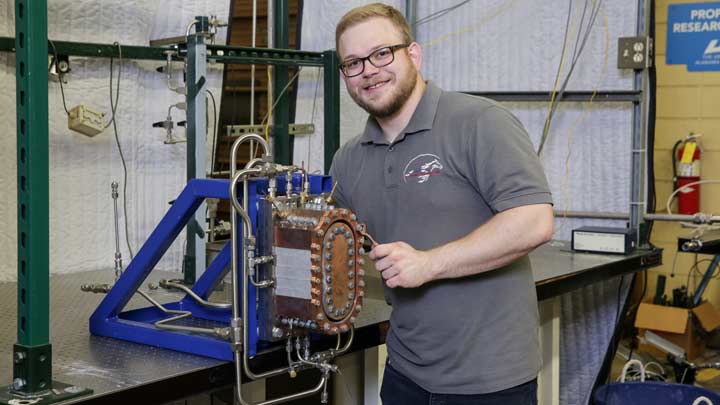 Seed funding was provided by Dr. Gabe Xu, associate professor of mechanical and aerospace engineering and a PRC associate, through the National Science Foundation’s Established Program to Stimulate Competitive Research: Connecting the Plasma Universe to Plasma Technology in Alabama.

“Once I have finished the developmental testing of the engine. Dr. Xu and his student Michaela Spaulding will be using the engine for that program to research the effects of transient plasma ignition on the detonation reactions within the combustor,” says Unruh.

Claflin’s RDE expertise has come in an unofficial capacity, Unruh said, adding, “The Propulsion Research Center is open to working with companies that are interested in researching and developing detonation engines.”

The engine was first test fired at UAH’s Johnson Research Center in late August and has had several firings since.

RDEs are a tantalizing engineering concept that could be transformative for rocket propulsion, offering better fuel efficiency than continuous-burn solid or liquid propellant engines if the inherent instabilities that make them run can be better controlled. Instead of a continuous burn, RDEs use a continuous spinning explosion to create supersonic gas and generate thrust. 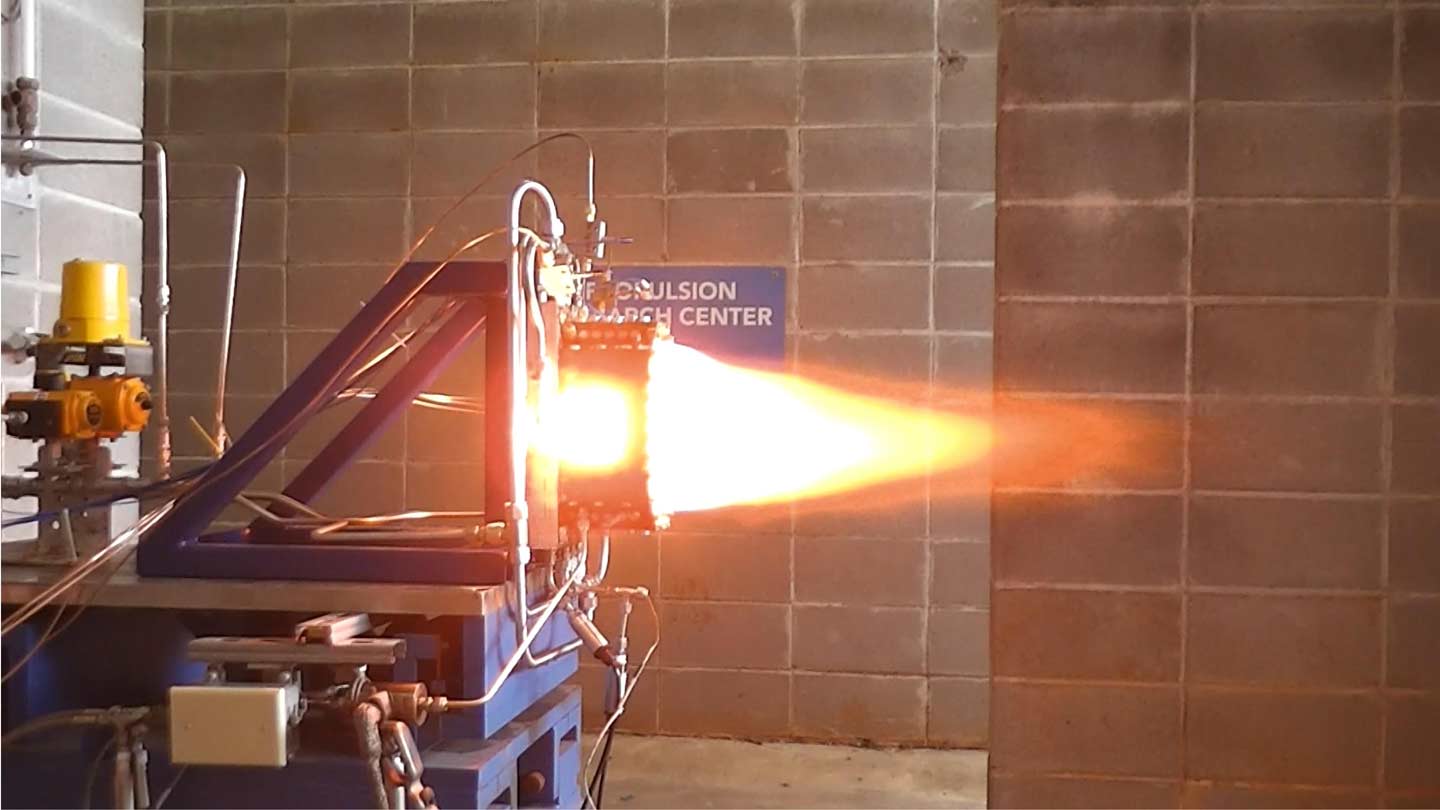 “As a concept, RDEs may facilitate the design of more efficient rocket engines. This would enable rockets that could fly higher, faster and more efficiently, thereby enabling greater access to space than what we see today,” says Unruh, who completed his MAE undergraduate career at UAH before going on to his master’s.

“There are still practical roadblocks to overcome before detonation engines become a viable option, but if there weren't, we wouldn't need to research them. We hope to overcome these obstacles by better understanding how the detonation process works inside these engines.”

The UAH engine is intended as a test-bed to allow researchers at the PRC to study various phenomena related to detonation combustion in RDEs, Unruh says.

Most RDEs are cylindrical but Eagle Creek, Oregon, native Unruh’s engine is designed in a racetrack-like shape.

“By designing ours to have a racetrack shape, we are able to add optical windows in the straight sections that allow us to directly observe the detonation wave inside the combustor,” he says. “In particular, this optical access will allow us to observe interactions between the detonation wave and the spray plumes of the propellants as they are injected into the engine.”

Another innovation is the use of shear-coaxial injectors, the spray nozzles that inject the propellants into the engine. Shear-coaxial injectors have previously been used extensively in traditional rocket engine designs, most notably in the Rocketdyne J-2 engines on the Saturn V rocket, and in the U.S. Space Shuttle’s main engines, but not commonly in RDEs.

Designed for research versatility, the engine runs on a variety of propellants. It’s currently being tested on liquid propane and gaseous oxygen.

Typically, a liquid or solid fuel rocket engine – or a jet engine combustor – relies on the deflagration phenomenon to react fuel with an oxidizer, Unruh says.

“This deflagration phenomenon is typically a subsonic burning process that is propagated through heat transfer mechanisms,” he says.

In contrast, he says that a detonation reaction in an RDE consists of a strong supersonic shock wave that adiabatically compresses a fuel/oxidizer mixture, bringing it up to its ignition temperature. Adiabatic systems are more efficient because they transfer energy to surroundings as work without transferring heat or mass.

“The reaction then occurs behind this high-pressure shock, and the expanding gasses from the reaction in turn drive the shock wave forward, continuing the propagation of the detonation. This detonation reaction happens much faster than the deflagration-based reactions currently used in jet and rocket engine combustors,” Unruh says.

“Theoretically, the detonation reaction is more efficient, because it produces a lower increase in entropy than the deflagration reaction,” he says. “Furthermore, the chemical reaction in a detonation happens in the high-pressure zone right behind the shock wave.”

Think of the detonation shock wave in an RDE as acting similar to a piston in a car engine. Combustion happens at a pressure that is higher than the initial pressure of the fuel and oxidizer mix because each prior shock wave compresses the incoming mixture before combustion, a phenomenon known as pressure gain combustion.

But theory can be tough to put into practice. So far no one has designed an RDE that is more efficient. The challenge is that in an RDE the propellants must be exploded supersonically rather than burned subsonically.

“As you might expect, exploding propellants are harder to understand and control,” Unruh says. “The RDE is one concept for an engine that shows promise of being a design that can detonate propellants in a controlled fashion and finally provide a practical realization of the theoretical promise of an increase in efficiency through detonation.”

RDE theory has been around since the 1940s and some primitive experiments were conducted in the past, but Unruh says that modern data acquisition equipment, better modeling and a greater historical collection of research is leading to a resurgence of RDE research. Engineers now have the capability to design engines that function in a rotating detonation mode.

“The next challenge,” he says, “is to further understand the detonation phenomenon so we can figure out how to finally build an engine that is more efficient than traditional deflagration-based engines.”