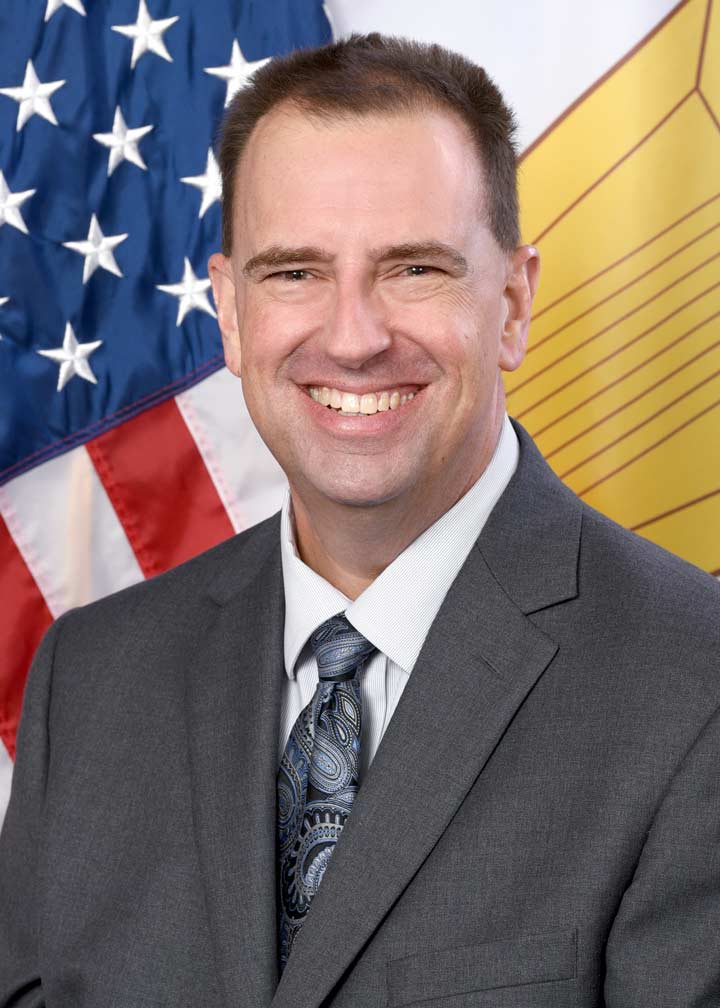 UAH alumnus Dr. James C. Kirsch, has been selected for Senior Executive Service, making him the permanent director of the Systems Simulation, Software and Integration Directorate.

"My dad was career Army. My grandfather also completed a full career in the National Guard and retired as a Command Sergeant Major. He spent his civilian career working for the Tennessee Valley Authority in Muscle Shoals, AL, on building projects like the Wilson Dam," said Kirsch. "I started as a Cooperative (Co-Op) Education student in what was then the Army Missile Labs at Redstone and transitioned to full-time when I graduated from The University of Alabama in Huntsville (UAH)."

Like thousands of other young men across the county, Kirsch became captivated by astronauts and engineering during the Apollo program. "My dream job was to go to work at NASA and become an astronaut. Once I started with the Army, it was clearly the right choice."

Kirsch calls Huntsville home, although he was born in Okinawa, Japan. The Army moved his dad to Huntsville, AL, in 1973, and he remained in North Alabama after retirement. Kirsch graduated from Grissom High School and completed his freshman year at Auburn University. He started a Co-Op job with the Army and transferred to UAH.

"The Co-Op program had a huge influence on my career path," said Kirsch. "Taking Engineering classes as an undergraduate, and later as a graduate student, and then immediately seeing those principles applied in a laboratory environment at work was extremely valuable.

"Frankly, I think most undergraduate engineers would benefit greatly from those work experiences," he added. "I also had exceptional mentors at work who strongly encouraged my development and the pursuit of advanced degrees."

"Both of them eventually left the Army and went to work for UAH full-time but continued to guide me in my graduate studies and research for the Army," said Kirsch. "I believe so strongly in the value of the Co-Op program and what it does for the students, the university, and the employer. My Co-Op time was a highlight of my UAH academic experience and something I strongly encourage others to try."

According to a 2018 article in Kiplinger’s Personal Finance, the amount Co-Op students earn depends on several factors including their level of ability, the field in which they are working and where the job is located. On average, students earned $17k in 2017-18 per Co-Op job. Some students, according to the article, earned as much as $20 an hour, or $20k in six months.

Kirsch said many of the best and brightest employees in the CCDC AvMC started as either Co-Op students or summer interns. "Those programs languished for a number of years, but we now have an opportunity to revitalize them. It is a priority for me to expand Co-Op opportunities in the CCDC AvMC."

Before beginning his Army career, Kirsch spent a lot of time on the UAH campus. "It is safe to say my favorite UAH experience was meeting my future wife, Shelia, who was a nursing student at the time." Sheila Kirsch graduated from UAH in 2000 with a BSBA in MIS.

"The friends we made during that time were priceless. We still have friendships that started at UAH and continue long after. We raised our kids together and now our grandchildren are about the same age," said Kirsch. "I was privileged to have some great professors like Dr. Gregory, Dr. Duthie, Dr. Reza Adhami (former Chairperson ECE), Dr. Mustafa Abushagur (former Professor ECE), and many others. The Optical Science and Engineering PhD program fit perfectly with my job at the time, and made for a great partnership between work and school."

As the Director of the Systems Software, Simulation and Integration Directorate, which is one of five Directorates within the CCDC AvMC Kirsch is responsible for ensuring that the U.S. military has the best combat capability in the world.

"It is a great responsibility and one we take extremely seriously," Kirsch said. "We do everything from new components and system development to upgrades for our systems in the field today."

Specifically, Kirsch is responsible for the software development that supports those systems as well as the modeling and simulation capability for all aviation and missile systems.

"We have the ability to perform everything from an all-digital simulation to putting actual flight hardware into simulated environments," said Kirsch. "These capabilities allow us to test new ideas and new capabilities in a cost-effective manner as well as save the Army (and the taxpayer) literally millions of dollars compared to live flight tests.

"Additionally, we can explore environmental conditions that would be difficult to create on a range but frequently occur on the battlefield," said Kirsch. "Associated with our software development and modeling and simulation capabilities are the cyber-security aspects of protecting our systems from malicious attack."

Kirsch affirmed, "The people in our military are some of the finest people on the planet. They are extremely bright and innovative and absolutely dedicated to protecting our country. Working with them to solve the problems they encounter on a daily basis is one of my favorite parts of the job."

He offers candid advice to young people considering a career in engineering.

"Both universities and high schools now offer opportunities to try different engineering fields of study. I strongly recommend engineering students look into the Co-Op program or other academic opportunities to apply what they learn in school to real-world problems," said Kirsch.

"Co-Op and internships programs will pay dividends not only in a better understanding of the concepts, but will also make students more marketable when they graduate. Academic programs that combine classroom-based study with practical work experience can also really impact an employer's productivity," said Kirsch. "One of my co-op supervisors (Dr. Gregory) used to say, ‘a good Co-Op made him work harder because he had to stay ahead of them!’."