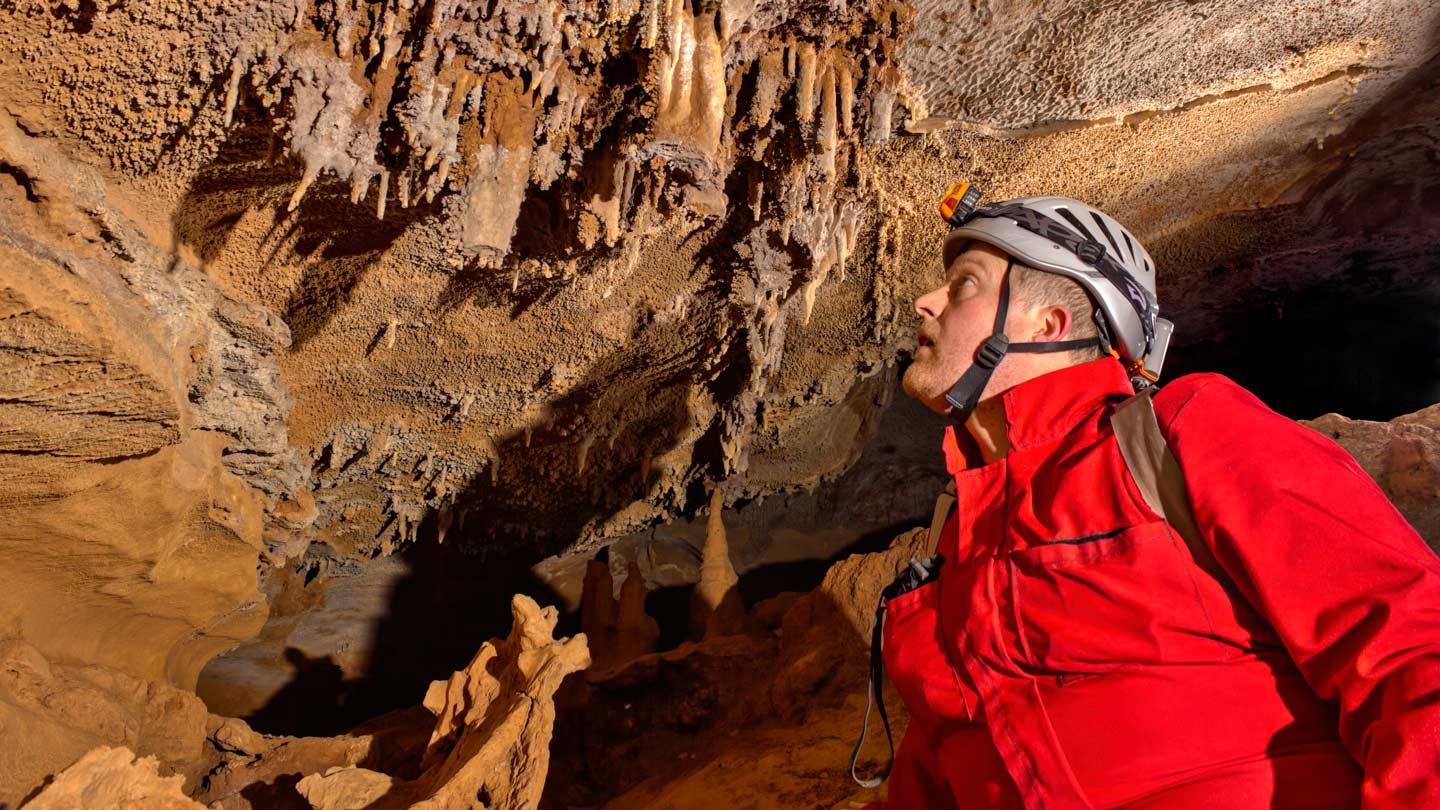 On the day the shrimp was discovered, the team was working on documenting any life it could see says Dr. Niemiller, shown here during a biological survey of a cave in Coffee County, Tenn.

You’d think there’d be no way someone could newly discover an endangered species hanging out in Fern Cave in the Paint Rock River valley of Jackson County, so close to Huntsville, home to thousands of spelunkers exploring every cave, nook and cranny.

But Matthew Niemiller and colleagues did.

In a discovery documented in a paper in the journal "Subterranean Biology," Dr. Niemiller, an assistant professor of biological sciences at The University of Alabama in Huntsville (UAH), found a specimen of the Alabama Cave Shrimp Palaemonias alabamae while doing a biological survey of Fern Cave in summer 2018 as part of a team of four.

The endangered shrimp had previously only been discovered in six caves in four cave systems in Madison County.

"Fern Cave is the longest cave in Alabama, with at least 15 miles of mapped passage and five to seven distinct levels," Dr. Niemiller says. The cave features a 437-foot deep pit and exploring most of its lower levels is reserved only for the very fittest, since the trip involves an arduous journey including drops to be rappelled.

Dr. Niemiller and team’s route to their discovery was no easy feat, either. The team entered the cave’s bottom level via the Davidson Entrance at the base of Nat Mountain on the Fern Cave National Wildlife Refuge. The section of Fern Cave is only dry enough for exploration without scuba gear at the height of summer. Otherwise, it takes a dive to explore its flooded passages.

"You go in that entrance, and immediately you are in water up to your chin," Dr. Niemiller says. From there, the journey twists and turns through tight spots and chambers, and the team sloshed through plenty of water at times.

The biological surveys of Fern Cave are part of a two-year project funded by the U.S. Fish and Wildlife Service (USFWS) that has involved over 20 biologists, hydrogeologists, and cavers to date from several organizations, including USFWS, UAH, U.S. Geological Survey, The Nature Conservancy, Southeastern Cave Conservancy, Inc., Kentucky Geological Survey, Huntsville Grotto and Birmingham Grotto.

The scientists relied on the knowledge and expertise of Steve Pitts who has mapped much of Fern Cave and is its guardian for the Southeastern Cave Conservancy Inc. "He has visited the cave more than any person alive, more than 450 times. Without Steve, this project wouldn’t be possible," Niemiller says.

"We went there to look for everything," Dr. Niemiller says. "It’s the biggest cave in Alabama, but really, we didn’t know much about it from a biological perspective."

The cave houses the largest winter colony of federally endangered gray bats (Myotis grisescens), and there are other commonly found cave dwellers, like salamanders and millipedes.

"We were working on documenting any life we could see," Dr. Niemiller says. "We’re looking at the ceiling, in the water and on the floor to see what we could find. We’re looking under rocks and into crevices, as well – every nook and cranny."

Team members meticulously documented their findings in notebooks and took photos of specimens. In cases where the species was not readily identifiable, they collected voucher specimens for later study.

"We came up on this passage where we could see there was a muddy bank, a place that maybe at other times of the year you didn’t want to be, an area that was clearly underwater for most of the year," Dr. Niemiller says.

At this spot there were vestigial pools, left when the water receded in the dry summertime. Dr. Niemiller peered into one.

"We are finding cave crayfish, cavefish and sculpin in this pool. Then I looked down and saw this weird thing, this little white crustacean swimming toward me, and I said, ‘That’s a cave shrimp!’"

The team collected a live sample because at the time it was unsure if the specimen was actually the endangered shrimp or possible a new undescribed species. After leaving the cave, Dr. Niemiller called USFWS and got permission to retain the specimen, which is now housed in the Auburn University Museum of Natural History.

But there’s more. The team found three other cave shrimp on that day in August 2018 and observed another two on a return trip in July of this year. The little animals pose some interesting questions for science.

First of all, there’s the Fern Cave location, in the Paint Rock River watershed, which led Niemiller to wonder if the shrimp was an undescribed species. However, the shrimp found at Fern Cave have been morphologically and genetically linked to those found in Madison County, a different watershed area.

"Fern Cave is in a different county and a different location than the other caves where this species has been found," Dr. Niemiller says. How did the Alabama Cave Shrimp make it there?

Little is known about the shrimp’s ecology. How does it breed, what is its lifespan, how does it survive and what foods does it eat? And why and when did the shrimp lose its eyesight and live in caves?

"Does this species represent something that went underground a million years ago? Two million? Five million?" Dr. Niemiller asks.

What are its closest relatives? "We need to explore the genetics of the species in more detail to find that out."

Perhaps the most interesting question is, what is the actual range of the shrimp, since it was newly found in a distinct watershed.

"We have to get a better understanding of the distribution of the shrimp," Dr. Niemiller said. "We’re hoping to get additional funding to survey other sites in Alabama for the presence of the cave shrimp and other cave species of conservation concern."

After all, perhaps the Alabama Cave Shrimp is doing better than scientists think, even though a population has disappeared in one cave in Huntsville where it was seen in the early 1970s.

Caves in this region of the country are far more extensive than they are amenable to human exploration, and here the tiny shrimp has had scientific impact. Dr. Niemiller’s team has developed a genetic assay that uses the shrimp’s environmental DNA. Shed in the normal course of living, this DNA could be detected in water samples taken from caves and springs by the assay, allowing science to peer into inaccessible areas in search of Palaemonias alabamae.

In northern Alabama and southern Tennessee, cave systems often are so extensive that anyone could be standing atop a habitat for the Alabama Cave Shrimp and not even know it.

"It could be right under your feet," Dr. Niemiller says. "It could be in a cavity, a well or a cave system underground."

Tiny cave passages too small to explore link together with underground gravel deposits flowing with water to offer lots of species habitats and opportunity for dispersal, and most of them science as-yet knows nothing about. In this respect, biological cave exploration is much like exploring the deepest recesses of the oceans.

"That’s what draws me to it," Dr. Niemiller says. "Every cave is different, and differently populated. We’re making many new discoveries."