When the James Webb telescope launches, 25 years of UAH R&D involvement will soar 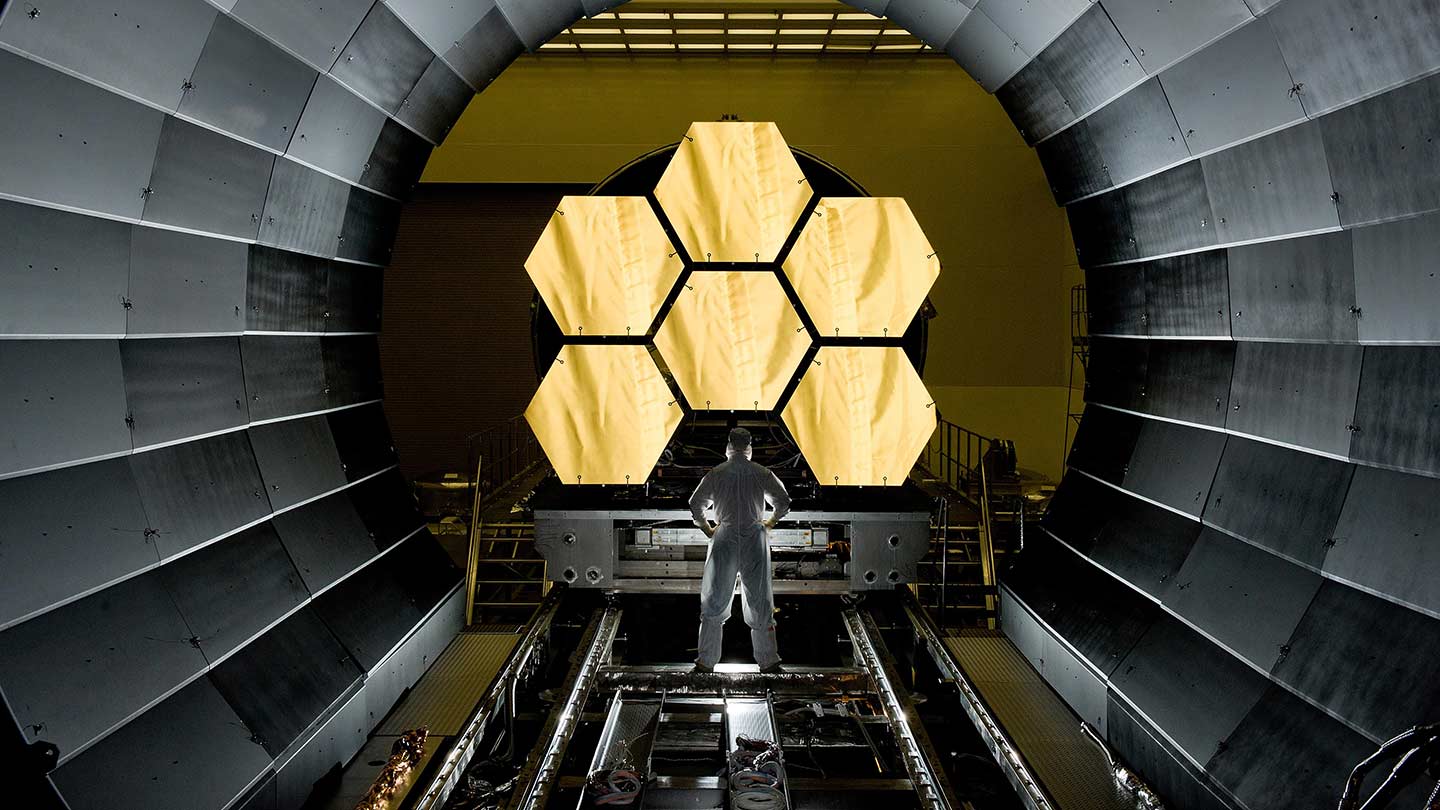 Six gold coated beryllium primary mirror segments in their test positions in the cryo vacuum chamber at NASA’s Marshall Space Flight Center X-Ray and Cryogenic Facility. These mirrors are some of the 18 segments that will be launched.

After a scheduled November launch, when NASA’s James Webb Space Telescope (JWST) achieves orbit and unfurls the 18 gold-coated beryllium segments of its 6.5-meter primary mirror, over two decades of crucial UAH partnership in the project will also blossom.

The telescope will launch aboard a European Space Agency Ariane 5 rocket from French Guiana. JWST will open vast new vistas to scientific exploration, viewing them via an “eye” that researchers at UAH’s Center for Applied Optics (CAO) have had critical partnership roles in conceiving, perfecting and testing.

For CAO Principal Research Scientist Dr. James Hadaway in particular, it will be a watershed event.

“I remember many times during my work on JWST when I would just stop and think to myself, ‘Wow, I'm working on the largest space telescope ever built, how cool is that?’” Dr. Hadaway says. “It is very exciting to be nearing the launch, after which I will be able to see the fruition of all that work.”

A long hauler, Dr. Hadaway (Ph.D., Optical Science and Engineering, 2004) has been deeply involved in JWST since 1996.

“I did want to be a part of the optical testing of the telescope optics from the beginning through to the end,” he says. “I thought that if at least one person was there for the entire process, it would provide a valuable opportunity to use the experience gained along the way to help ensure a successful overall testing program.”

For Dr. Patrick Reardon, currently the CAO director, who began in 1998 to support the design and testing work led by Dr. Hadaway, the coming launch marks a remarkable concentration of public and private research.

“First, it is hard to believe that something I and so many others here at UAH and across the city have invested so much time and talent into is finally culminating with a launch. I started on this 23 years ago – the same time my daughter was born!” says Dr. Reardon (MS, Physics, 1990; Ph.D., Physics, 1993).

“Second, I am proud that I was able to be a part of this project, especially given the great work we did and the excellent leadership James Hadaway provided as the UAH project lead.”

In March, the telescope completed its final functional tests at Northrop Grumman in Redondo Beach, Calif., to prepare for launch. Designed to observe the most distant stars and galaxies ever viewed, JWST works by gathering their faint infrared energy with its large primary mirror. During flight, the telescope’s mirror will be folded up before it flowers.

“I had been working on potential optical designs for a 20- to 30-meter diameter space telescope for Marshall Space Flight Center’s Advanced Concepts group,” Dr. Hadaway says. “When JWST came along, planned as a 6- to 8-meter telescope, NASA asked me to lead a team to develop an initial optical design.”

After that effort, Dr. Hadaway was asked if UAH could take the lead in developing and operating an optical measurement system for testing various mirror technologies that could potentially meet the requirements for the JWST primary mirror. JWST’s mission depends on a near-perfect mirror, and that meant lots of testing on Earth at temperatures approximating the extreme cold of outer space.

“So, I put together a team within the CAO to work with the folks at MSFC's X-Ray and Cryogenic Facility (XRCF) to test these mirrors in their large vacuum chamber, which cooled them to the JWST operating temperature of minus 378 degrees Fahrenheit,” Dr. Hadaway says. 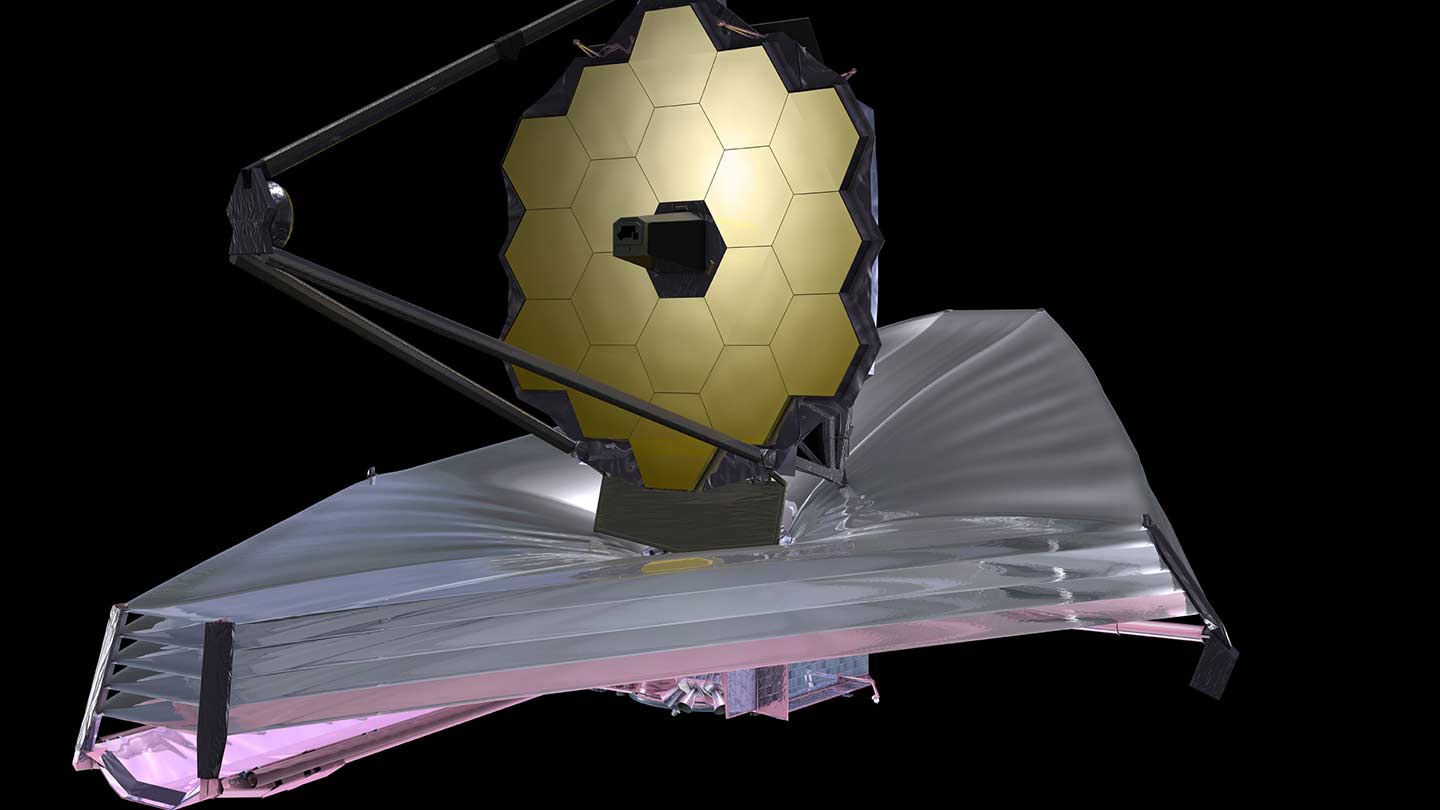 The James Webb Space Telescope is an orbiting infrared observatory that will look much closer to the beginning of time and hunt for the unobserved formation of the first galaxies, as well as look inside dust clouds where stars and planetary systems are forming today.

Dr. Reardon supported Dr. Hadaway, the project’s principal investigator, by assisting in the design and development of the optics test system, and then working at the XRCF performing a series of tests on different candidate mirror technologies.

“The mirrors had to be lightweight and there were several competing technologies from different organizations that had to be tested to see which was the best for JWST,” says Dr. Reardon, adding that the mirrors were both parabolic and off-axis.

A lot of time was invested in developing a method and procedure to verify the mirror alignment, and on analysis of the system.

“I was then testing the candidate mirrors, applying the test procedures we had developed,” Dr. Reardon says. “These tests were completed and NASA made a selection of the mirror technology.”

After the flight hardware was developed, exacting appraisal of the 18 JWST flight primary mirror segments began. Working as part of a subcontractor team for Ball Aerospace & Technologies Corp. (BATC) that included Dr. Reardon, Dr. Hadaway was about to find out how the lightweight mirrors would perform in space conditions.

From 2010-2012, the 18 mirrors arrived in six batches for examination. As anticipated, once cooled with liquid nitrogen and gaseous helium in a bus-sized chamber at the XRCF, the mirrors deformed in the extreme cold. Data from the first round of testing was then used by BATC to re-polish the mirrors to correct the deformations. Finally, a second round of testing was performed to ensure the mirrors were near-perfect at their cryogenic operational temperature. 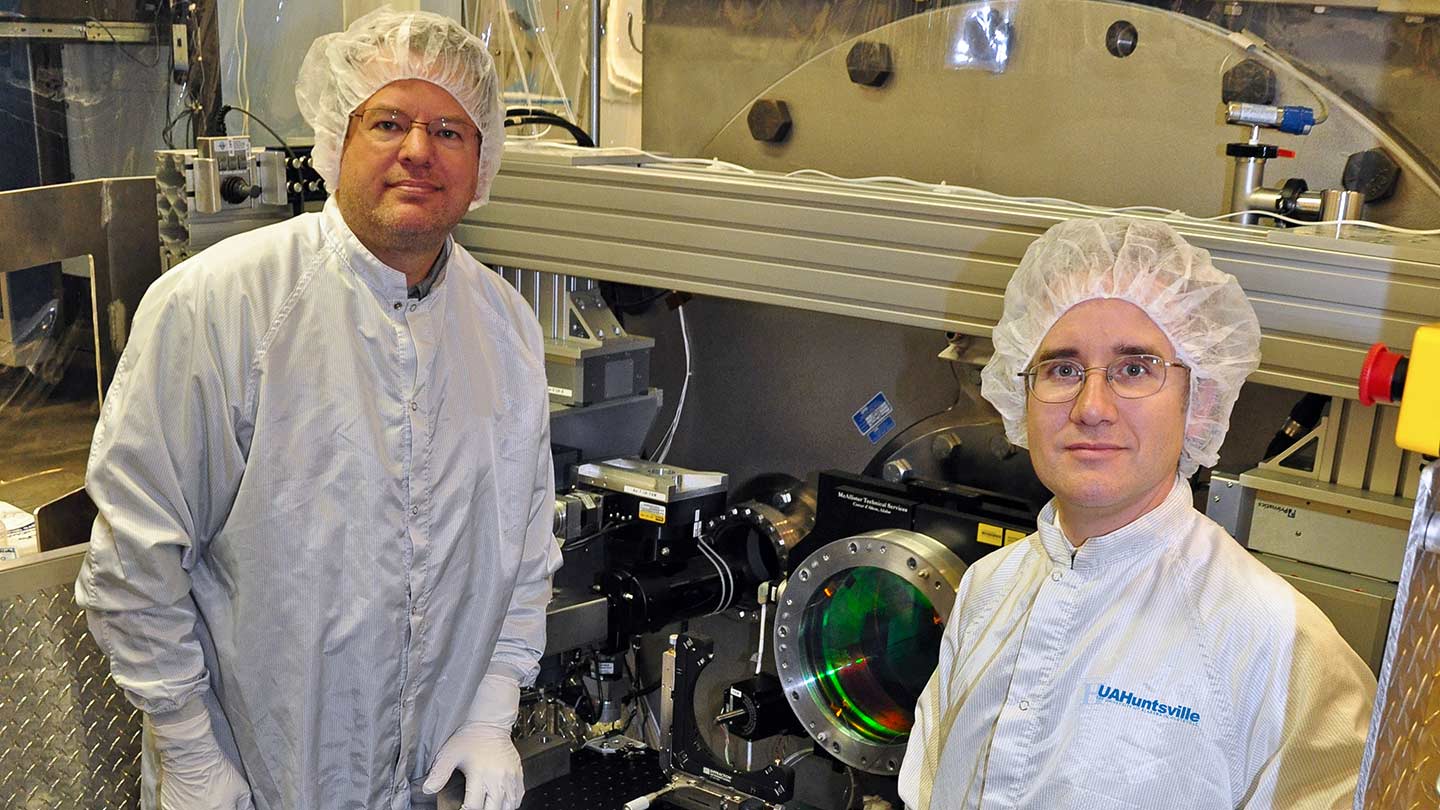 Dr. James Hadaway and Dr. Patrick Reardon near testing equipment that measures the surface shape of the mirrors in the chamber. The window through which they made the measurements is the greenish circle between and behind them.

In addition to working on mirror evaluation, Dr. Reardon supported a 24/7 testing cycle for the backplane that holds the mirror segments.

“Measurements were needed to verify that the structure the mirrors were going to be attached to was stable, and that its changes when going from ambient to cryogenic temperatures were well understood,” Dr. Reardon says.

The involvement of the CAO and Dr. Hadaway didn’t end there.

“With the experience we had gained in testing mirrors at cryogenic temperatures, the project leaders at GSFC then asked us to support the testing of the full telescope in an eight-story vacuum chamber at JSC,” Dr. Hadaway says. “I worked for several more years with ITT-Exelis, now part of Harris Corp., to successfully complete that testing.”

Though there were many technical challenges throughout UAH's involvement in the JWST program, Dr. Hadaway says the biggest was aligning the 18 primary mirror segments during the full telescope testing at JSC.

“We had to align them to each other to within 150 nanometers, or 0.000006 inch, without being able to actually touch them, since they were inside a vacuum chamber,” he says. “But with a lot of great people on our team, we were able to meet the requirement.” 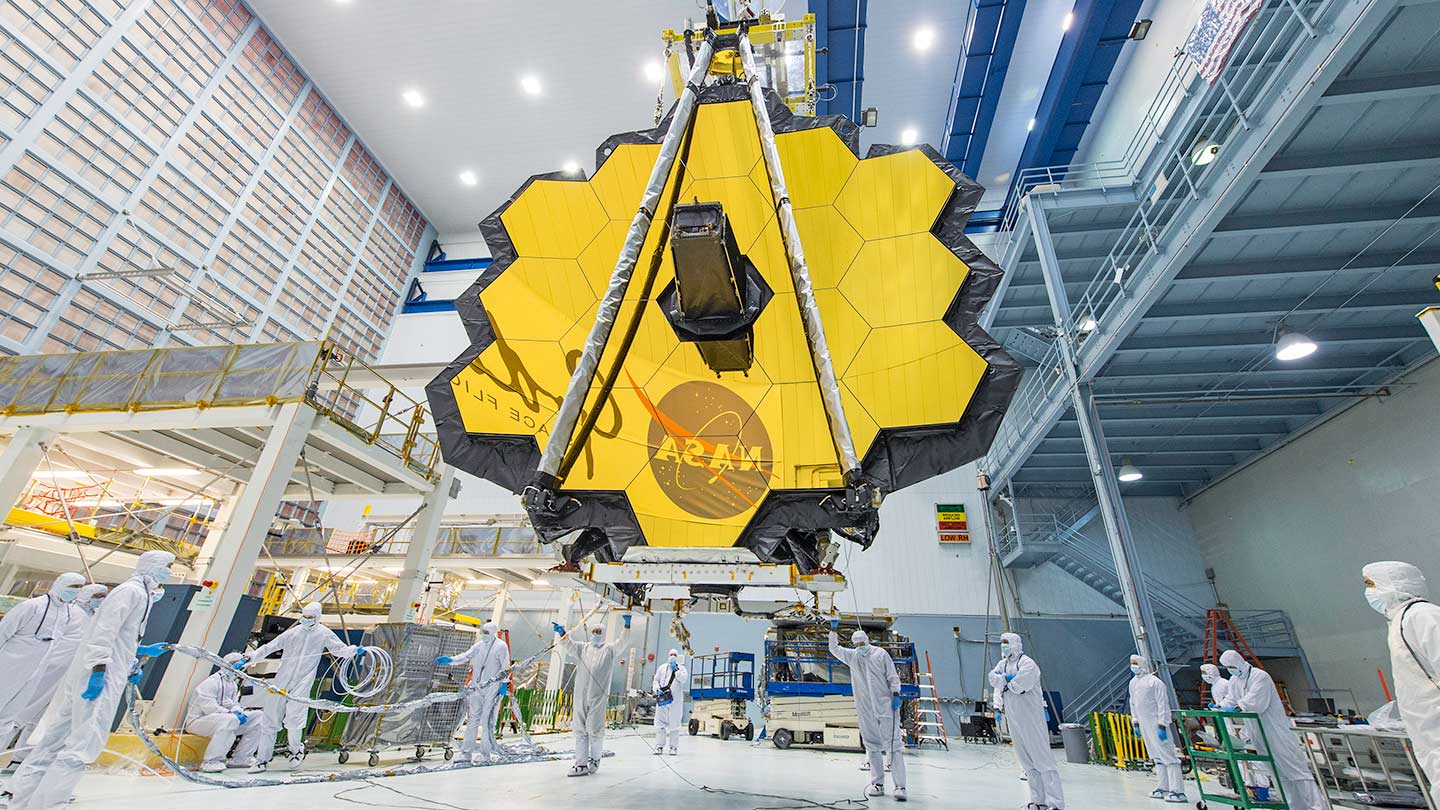 The fully deployed James Webb Space Telescope being moved by crane inside a clean room at NASA’s Goddard Space Flight Center in Maryland.

Working on JWST accelerated the growth of UAH’s CAO in optical systems modeling, optical fabrication and testing, Dr. Reardon says. As well as the research the project yielded, the telescope supported CAO student research projects, master’s theses and doctoral dissertations. At least five doctoral degrees and five master’s degrees were conferred because of the work.

“We learned a lot on this project. Optical modeling techniques. Optical test procedures for complex surfaces. Cryogenic testing. Large, lightweight optics,” Dr. Reardon says. “We were able to leverage the success and growth we had from this project to acquire our first major equipment upgrade in 15 years, the Moore Nanotech 250UPL diamond turning machine, thanks to U.S. Sen. Richard Shelby.”

The Nanotech enabled the CAO to produce optics for many local, regional and national companies. It can produce non-rotationally symmetric optical surfaces up to about 300 mm diameter.

“Having this diamond turning machine helped us win the National Science Foundation proposal to acquire the Zeeko IRP600X free-form polisher, an instrument that can produce optics up to about 600 mm diameter that we have successfully applied to many substrate materials including aluminum, Zerodur, borosilicate and even 3D printed Invar 36,” Dr. Reardon says.

“With some recently acquired advanced metrology equipment, from both donations and purchases, our testing now matches our fabrication capability.”

The JWST brought UAH – a university founded on America's space quest – into close developmental partnership with NASA, the ESA and the Canadian Space Agency, all of which are involved in the telescope.

“JWST is a massive international collaboration,” says Dr. Hadaway. “The interactions with the dedicated people within all of these organizations were very rewarding for us, with many permanent relationships established.”