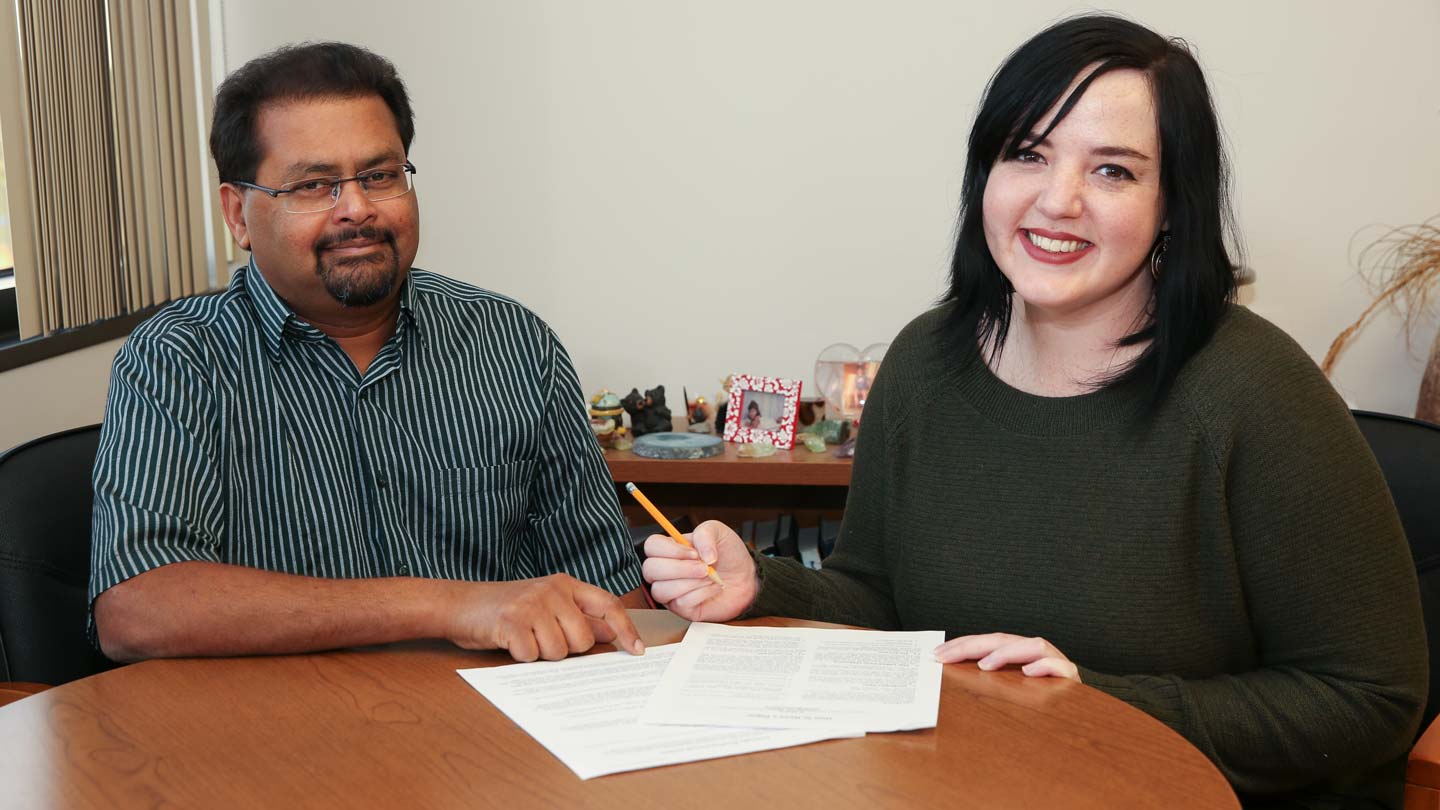 Changing land cover and use affect hurricanes, according to new research by UAH’s Dr. Udaysankar Nair, left, and Emily Foshee along with other collaborators.

Coastal cities can be spared some wind destruction from intensifying hurricanes or tropical storm systems if they have functional wetland ecosystems and agricultural croplands in the area, according to new computer modeling research led by The University of Alabama in Huntsville (UAH).

"Our study was about how changing land cover in coastal areas affects rain from tropical storms," says Emily Foshee, co-author of the research and a research associate at UAH’s Earth System Science Center who analyzed the models. Dr. Eric Rappin from Western Kentucky University ran the numerical model experiments.

Scientists used the model with a simulation of a flooding storm over Baton Rouge as a control and then modified the type of land the storm passed over to assess the effect. They modeled three land types: healthy coastal marshland, marshland that had become saturated or turned to open water and coastal land that had been converted mostly to agricultural use.

The ground moisture and vegetative buffering of healthy marsh impede storm intensification but increase rainfall in the model.

"If you want to keep the marsh ecology intact because you don’t want to lose all the other benefits of marshland such as preventing soil erosion and the wildlife and aquatic life benefits, and if you are concerned about how to have less damage from storm winds, then you must keep the wetlands," says Dr. Udaysankar Nair, UAH associate professor of atmospheric science and the paper’s lead author, whose research was funded by the National Science Foundation.

"When you have a landfalling hurricane, if you have wetlands there, then there is a greater chance that the storm or hurricane will weaken," Dr. Nair says.

Scientists modeled the effects on the Baton Rouge, La., region by using NASA land surface model data and data from an actual large flooding storm. Study findings, which support preservation and restoration of healthy marshes, may be especially important in Louisiana, which loses the equivalent of a football field of land to water every hour.

Agriculture continues to convert wetland in Louisiana to crop uses, and those practices tend to dry soils. Cut off from a source of water vapor, storms in the model that passed over cropland were less intense and windy. But there’s a tradeoff. Single crop agricultural lands don’t possess the erosion control and biodiversity benefits of marshland, Dr. Nair says.

The combined effect of healthy wetlands transitioning to cropland reduced storm intensity in the model no matter what soil moisture conditions were present.

The research says that if current trends continue, a substantial portion of Louisiana wetlands will transition to open water in coming decades, likely making the studied region even more vulnerable to heavy rain events from future tropical systems.

Marsh that has become super-saturated or has turned to open water, known as a brown ocean, produces the most damaging winds in the model, while at the same time spreading out rainfall. That’s because saturated wetlands or open water continue to feed energy into a hurricane’s system.

Air spirals in toward the eye of a hurricane, and as it does it has a tendency to cool, Dr. Nair says. While the storm is over warm open ocean, over open water resulting from conversion of wetlands, or over the brown ocean of a saturated marsh, the energy from the wet and warm surface offsets the cooling effect with warm humid air and the storm can continue to grow stronger.

"What happens when a hurricane comes ashore is that the land cuts off that source of energy," Dr. Nair says. "Different forms of land cover affect the storm. What we found out is that it’s not just the water vapor that affects storms."

The natural vegetation in healthy marsh has more buffering friction than if it has been converted to open water or agriculture, he says.

"If all these marsh regions are instead filled with water, essentially that is like the open ocean coming right to land," Dr. Nair says. "Then you see more wind and more spread out rain, and more damage out of the storm. The storm will continue to intensify as it comes in."

The work points to other areas for further study.

"If we do more of these kinds of studies," Dr. Nair says, "then we can potentially be able to say something about how the patterns of land use change and land management affect landfall in hurricanes."