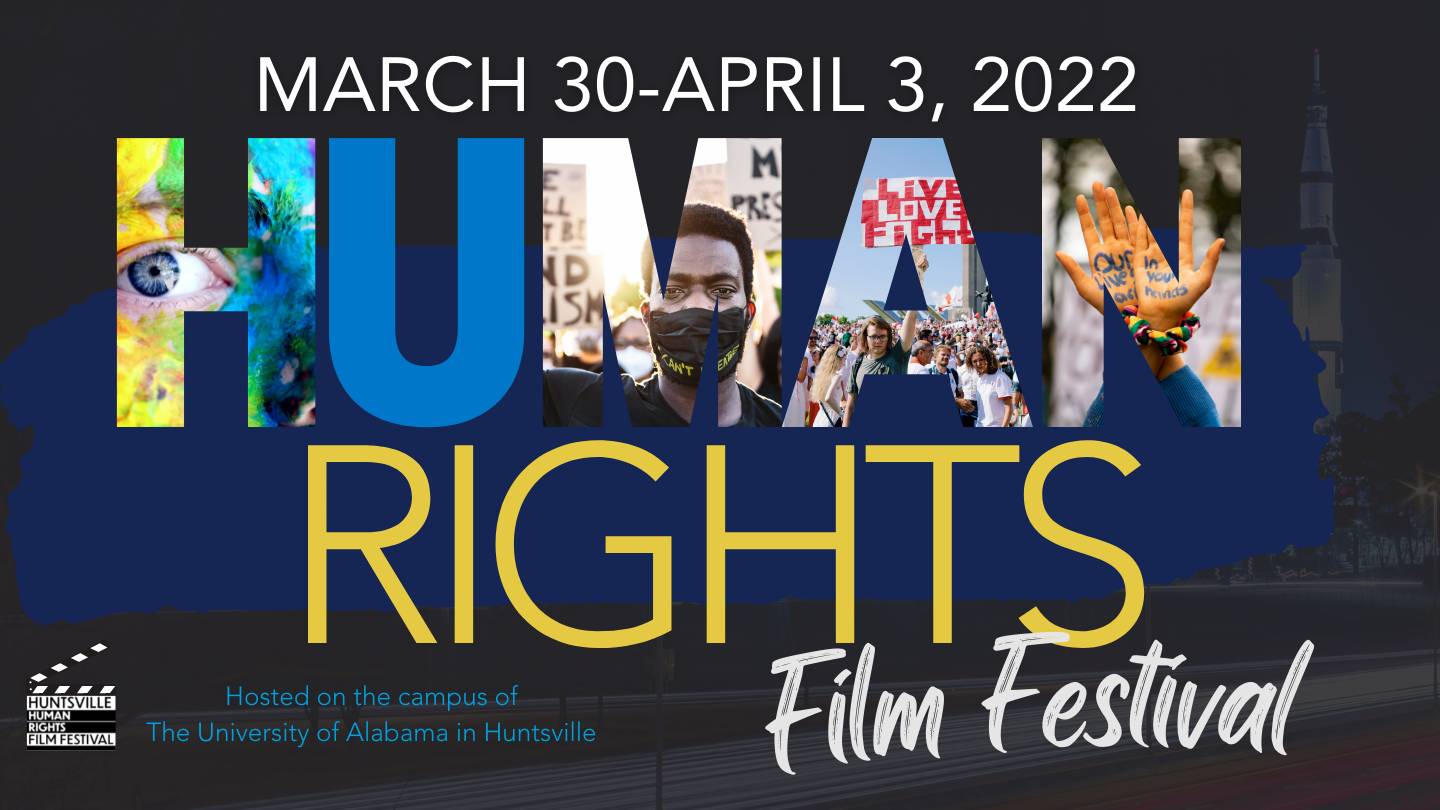 The Huntsville Human Rights Film Festival will take place March 30 – April 3 on the campus of The University of Alabama in Huntsville, a part of The University of Alabama System. The Festival is a collaboration of the UAH Humanities Center, Office of Diversity and Inclusion, Office of Student Life, North Alabama School for Organizers, Southern Fried Film Festival, North Alabama Standing Up for Racial Justice (SURJ) and other campus and community groups.

The Festival elevates the twin themes of environmental and social justice through documentaries, feature-length films, guest speakers, artists and performances that vividly portray stories of hope, anguish, resilience and strength – pillars of the inexorable, global movement of marginalized peoples toward social justice.

These are voices and experiences not often heard, and the Festival opens the door for memorable film experiences and eye-opening, first-person interactions among diverse people groups. All events are free and open to the public. Film screening locations include Morton Hall, Chan Auditorium and Charger Union on the campus of The University of Alabama in Huntsville.

A pre-Festival film screening of Anthropocene: The Human Epoch and discussion of will be moderated by College of English lecturer Dr. David St. John. Dr. St. John and co-panelists Tyler Dickey, James Galliher, Sydney Lanier and James Rogers will critically discuss the film and their work in the critical theory course, Writing the Anthropocene. Anthropocene: The Human Epoch is a vivid cinematic depiction of the breadth and impact of humanity’s interaction with the planet. A cinematic meditation on humanity’s massive reengineering of the planet.

The Huntsville Human Rights Film Festival officially kicks off Thursday, March 31, 7:00 pm with the public premiere of the documentary Angel of Alabama featuring Lawrence County activist Brenda Hampton who stood up to corporations and led the charge to heal her community of dangerous water contaminants. Ms. Hampton will join the Festival with documentary producer Elijah Yetter Bowman.

Supaman is an award-winning Indigenous activist, hip-hop artist, and fancy dancer who enthralls audiences with lyricism and dance.

A lighthearted and poignant documentary that profiles three sisters, ages six, nine and eleven, struggling to understand why and how their Uncle Bill is becoming a woman. These girls love their Uncle Bill, but will they feel the same way when he becomes their new Aunt Barbara? With just weeks until Bill's first visit as Barbara, the sisters navigate the complex territories of anatomy, sexuality, personality, gender and fashion. The film offers a fresh perspective on a complex situation from a family that insists there are no dumb questions.

UAH Film Professor Dr. Joseph Watson and Ray Santisteban, director of the First Rainbow Coalition, discuss filmmaking and activism and preview the historic documentary. Santisteban is an award-winning documentary filmmaker whose work has aired nationally and internationally on public television. His work gravitates toward political subjects and artist profiles, addressing the themes of justice, memory and personal transformation.

An account of the groundbreaking 1960’s Chicago alliance between the Black Panthers, Young Lords and Young Patriots. In 1969, the Chicago Black Panther Party, notably led by the charismatic Fred Hampton, began to form alliances across lines of race and ethnicity with other community-based movements in the city, including the Latino group the Young Lords Organization and the working-class young southern whites of the Young Patriots.

Event Panel: Dialogue with Hy Thurman, North Alabama School of Organizers and friends of the Movement

A post-documentary discussion with members of the First and Second Rainbow Coalition, discussing new pathways in the movement for justice and equality, moderated by Dr. Troy Smith.

Always In Season explores the lingering impact of more than a century of lynching African Americans and connects this form of historic racial terrorism to racial violence today. The film centers on the case of Lennon Lacy, an African American teen who was found hanging from a swing set in Bladenboro, North Carolina, on August 29, 2014. Despite inconsistencies in the case, local officials quickly ruled Lennon’s death a suicide, but his mother, Claudia, believes Lennon was lynched. Claudia moves from paralyzing grief to leading the fight for justice for her son.

Growing up in rural North Carolina, Moises Serrano fell in love with a country that refused to recognize his full humanity – both as an undocumented immigrant and as a gay man. The documentary Forbidden follows Moises’ personal journey as an activist fighting for the American Dream.

Moises Serrano is an openly queer and undocumented activist and storyteller who has lived most of his life in Yadkin County, NC. Since coming out as undocumented in 2010 he has relentlessly pursued equality for his community through the sharing of his narrative. His mission is to de-criminalize and humanize the issue of migration while advocating for immediate relief to migrant communities.

In 2016, the world turned its eyes to the people of Standing Rock as they formed a coalition of unprecedented magnitude to defend their land and water from the threat of the Dakota Access Pipeline. An inflection point for human rights and environmental justice, the #NoDAPL struggle became a rallying cry for Indigenous people everywhere to take a stand against the myriad injustices committed against them for centuries.

After the screening of Oyate, join Brandon Jackson, Director/Producer, Emil Benjamin, Director/Producer, and Jennifer Martel, Producer for a post-film dialogue on activism, storytelling, and the growing Indigenous movement for social justice. Moderated by Dr. Cindy Tekobbe, The University of Alabama.

How does a father and a community find purpose in their pain? In 2014, Michael Brown Sr.’s son was killed by police officer Darren Wilson in Ferguson, Missouri, an event that fueled the global Black Lives Matter movement. But his personal story seeking justice and healing, and the story of the community, has not been told until now.

Deep Run is a powerful verité portrait of trans life in rural North Carolina. Exiled by her family and rejected by an ex-partner, 17-year-old Spazz has no one to lean on for support. But when Spazz falls in love again and summons up the courage to become Cole, a strong-willed trans-man, his candid humor and steadfast, all-inclusive Christian beliefs counter the bigotry he experiences daily.

Nerdy women - the "hidden half" of fan culture - open up about their lives in the world of conventions, video games and other rife-with-misogyny pop culture touchstones. While geek communities have recently risen to prominence, very little attention is paid to geek women. Filmmaker Gina Hara, struggling with her own geek identity, explores the issue with a cast of women who live geek life up to the hilt: a feminist geek blogger, a convention-trotting cosplayer, a professional gamer, a video-game designer and a NASA engineer.

Fred Hampton, a young, charismatic activist, becomes Chairman of the Illinois chapter of the Black Panther Party - putting him directly in the crosshairs of the government, the FBI and the Chicago Police. But to destroy the revolution, the authorities are going to need a man on the inside.

Internationally recognized criminal defense lawyer Nancy Hollander joins the Festival to discuss her four decades representing individuals and organizations accused of crimes, including those involving national security issues, in trial and on appeal. In her appeal, she was the lead appellate counsel for Chelsea Manning and won Ms. Manning’s release in 2017 when President Obama commuted her sentence from 35 years to seven years.

Based on the New York Times best-selling memoir "Guantánamo Diary" by Mohamedou Ould Slahi, The Mauritanian is the inspiring true story of Slahi's fight for freedom after being detained and imprisoned for years without charge by the U.S. Government. Slahi finds representation in defense attorney Nancy Hollander (played by Jodie Foster) and her associate Teri Duncan who battle the U.S. government in a fight for justice that tests their commitment to the law and their client at every turn.

A modern-day story of the world’s first eco-revolution and a native people's remarkable victory over Western Colonial power. A Pacific island rose up in arms against giant mining corporation Rio Tinto Zinc (RTZ) and won. A David and Goliath story of the 21st century, The Coconut Revolution will appeal to people of all backgrounds.

Filmed during the height of the Great March of Return protests, it features exclusive footage of demonstrations where 200 unarmed civilians have been killed by Israeli snipers since March 30, 2018. It is a documentary about the historic Great March of Return protests, which occurred every week from March 2018 until December 2019, but covers so much more. It tells the story of Gaza past and present, showing rare archival footage that explains the history never acknowledged by mass media.

The Boy Game tackles bullying among boys at its core: the culture of toughness and silence boys live by. Targets need to be protected, absolutely, but rather than vilify bullies, The Boy Game looks to unpack the complex dynamics that lead some boys to bully and the majority to stand watching in silent conflict.

As uprisings spread across the country, a young poet in Birmingham, Alabama, becomes involved in local protests against decades of police brutality. As he tries to reconcile the city’s modern image as a diverse and welcoming metropolis with its violent and complex civil rights history, he suddenly becomes a part of the story when he’s arrested at a demonstration.

Come Hell or High Water: The Battle for Turkey Creek follows the painful but inspiring journey of Derrick Evans, a Boston teacher who returns to his native coastal Mississippi when the graves of his ancestors are bulldozed to make way for the sprawling city of Gulfport. Derrick is consumed by the effort to protect the community his great grandfather’s grandfather settled as a former slave. He is on the verge of a breakthrough when Hurricane Katrina strikes the Gulf Coast.

Modern society sits at the intersection of two crucial questions: What does it mean when artificial intelligence increasingly governs our liberties? And what are the consequences for the people AI is biased against? Coded Bias explores the fallout of MIT Media Lab researcher Joy Buolamwini’s discovery that facial recognition does not see dark-skinned faces accurately or classify the faces of women.

Film Screening: Beyond Recognition, A Film by Michelle Grace Steinberg

After decades of struggling to protect her ancestors’ burial places, now engulfed by San Francisco’s sprawl, a Native woman from a non-federally recognized Ohlone tribe and her allies occupy a sacred site to prevent its desecration. When this life-altering event fails to stop the development, they vow to follow a new path - to establish the first women-led urban Indigenous land trust. Beyond Recognition explores the quest to preserve one’s culture and homeland in a society bent on erasing them.

In 2016, the world turned its eyes to the people of Standing Rock as they formed a coalition of unprecedented magnitude to defend their land and water from the threat of the Dakota Access Pipeline.  An inflection point for human rights and environmental justice, the #NoDAPL struggle became a rallying cry for Indigenous people everywhere to take a stand against the myriad injustices committed against them for centuries.