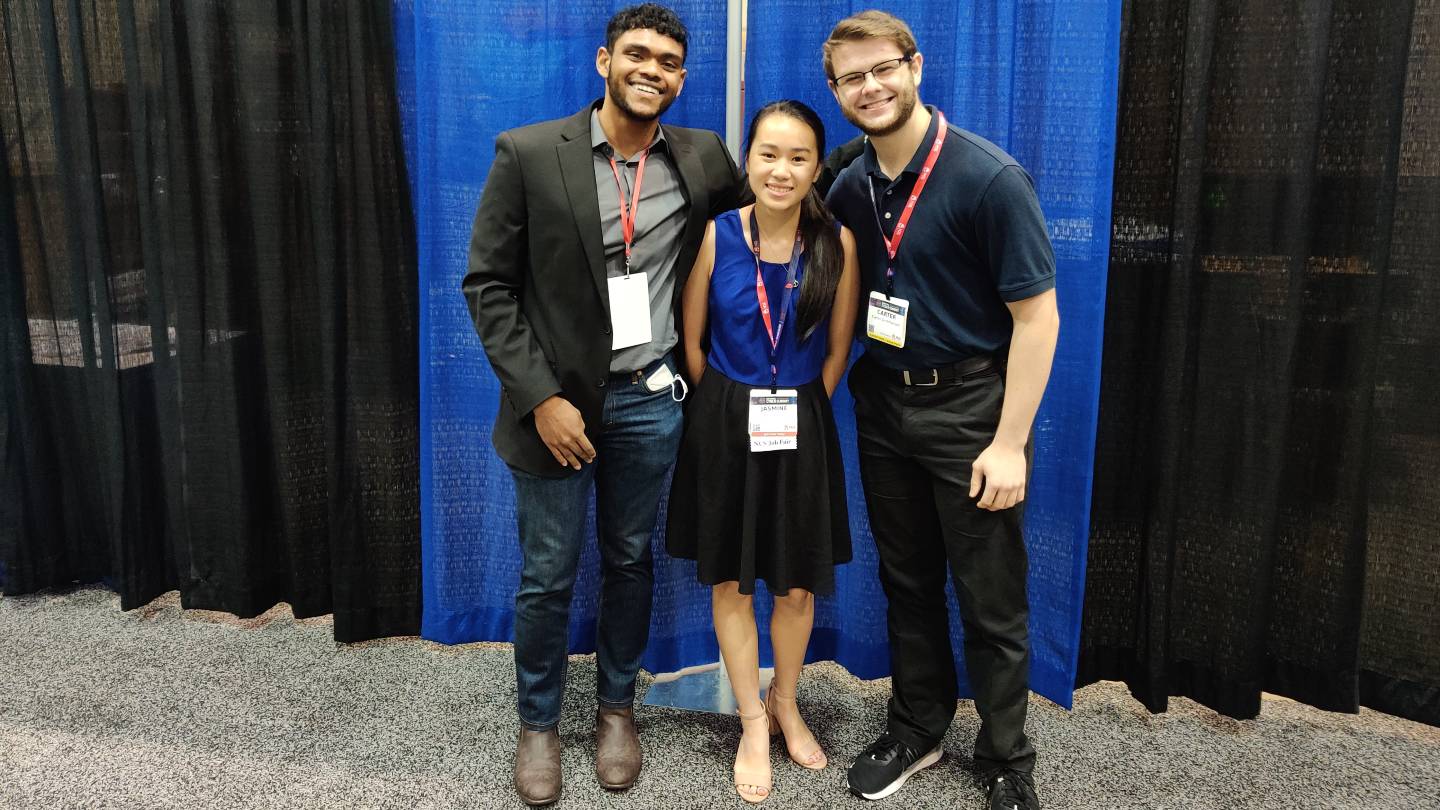 From left, the members of Binary Opposition are Marcus Jefferson, Jasmine Le and Carter Grimmeisen.

Binary Opposition, a team of three University of Alabama in Huntsville (UAH) students, won the academic category and a $5,000 prize in Cyber Cup capture the flag cybersecurity competition at the recent National Cyber Summit in Huntsville.

The trio split the prize money between them. With 4,690 points total, Binary Opposition placed fifth in overall competition.

In the contest, participants are given a number of true-to-life challenges that all result in a text-based flag, Grimmeisen explains. These challenges are worth points, depending on difficulty, and they mirror the challenges professionals would face.

“The challenges range from things like exploiting a vulnerable web application, to reverse engineering software binaries, to deciphering encrypted data provided to us. It's all about recognizing attack vectors, and knowing what tools and techniques we can leverage to take advantage of them,” he says.

“The competition was 12 hours in total, spread across three four-hour windows,” Grimmeisen says. “The academic division is exactly the same as the professional division except that the only eligible participants for this category are active students.”

The challenges provide teams with experience in situations that blue and red team cyber security professionals may encounter, says Jefferson.

“We compete in these competitions as a team because it is invaluable to take the concepts that we learn as students and actually see the industry applicable side of things, whether it be through competition or internships,” Jefferson says. “As for our internships, Carter and Jasmine both intern at Northrup Grumman and I intern at Brockwell Technologies.”

Le says she was surprised when the team did so well.

“In the past, each team only had four hours to complete the challenge, so we were surprised that this year we were given the full 12 hours,” she says. “Our team was unaware of this change until the competition was five hours in, so we started a bit late, but I think competing in the past helped us earn points faster than teams competing for the first time.”

The team wasn’t entirely sure how it would all turn out, Grimmeisen says.

“As for how it felt, this was our third year competing at the Cyber Cup and after two consecutive third places, it felt amazing to finally claim our spot at the top,” he says. “Everyone there is really passionate about the field, and were happy to share how they had gotten challenges we hadn't and vice versa, so it's a really great atmosphere to grow, regardless of who ends up taking the prizes.”

Binary Opposition has been competing since its members attended New Century Technology High School together.

“Overall, we each have a variety of experiences to pull from,” Le says. “It was helpful for me to rely on my teammates to solve flags on problems that I did not have experience working with. Additionally, many of the flags we solved were a result of learning and Googling throughout the competition.”

The team is looking forward to capture the flag competitions hosted at the annual BSides Huntsville security conference and Cyber FastTrack, as well as a return to the next Cyber Cup.

“We recently learned that graduate students are still eligible for the academic bracket, and so we will continue to come back and try to hold onto our crown,” Grimmeisen says.

The competition and attending the National Cyber Summit gave team members the opportunity to network with professionals in the field, Le says.

“Through the competition, we were able to showcase our skills and build our network for after graduation.”