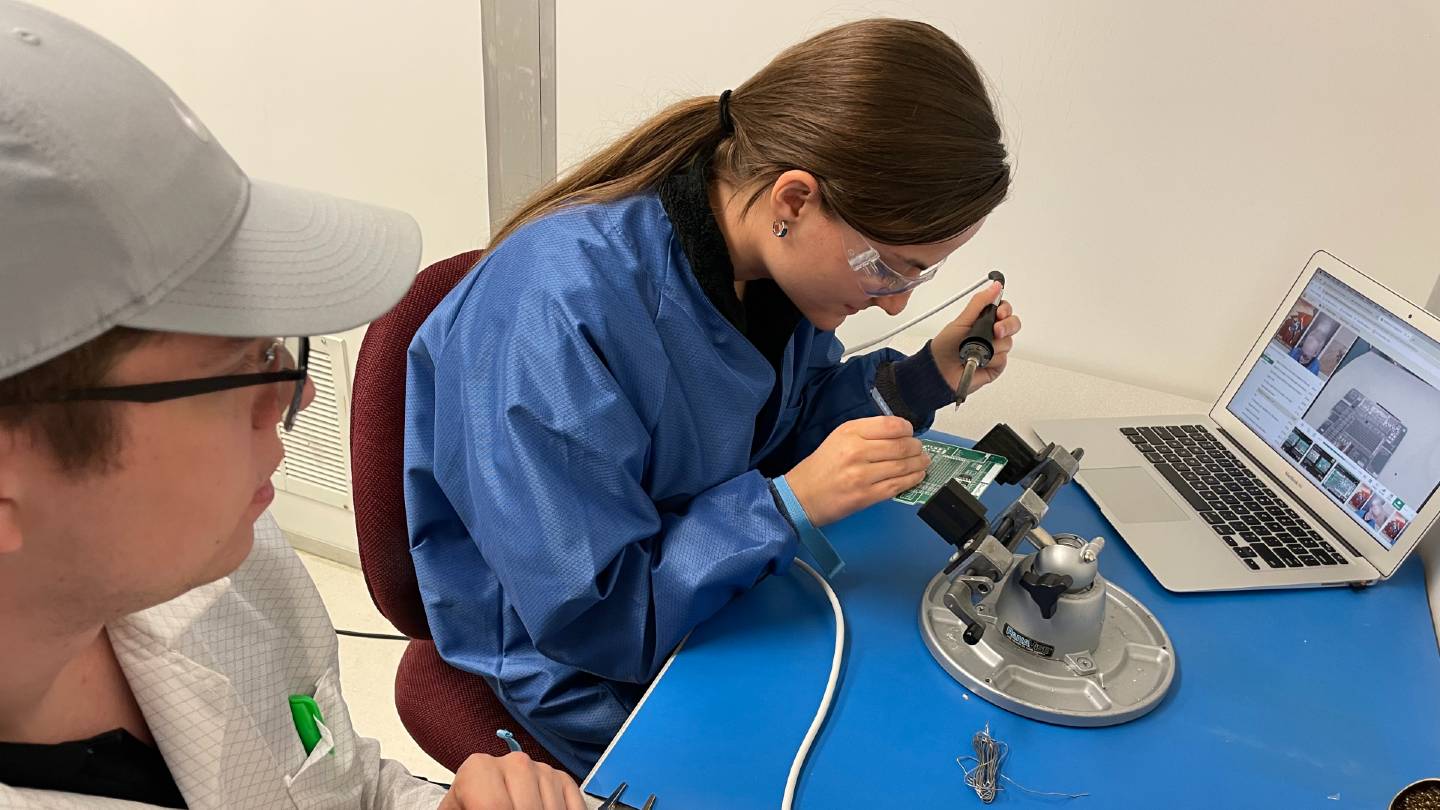 Victoria Tarpley solders the device while Tyler Ardrey, at left, looks on.

For the first time in almost a decade, a payload created by a student-led group at The University of Alabama in Huntsville (UAH) has rocketed to space.

Students are now analyzing the data sent back by the flight monitoring equipment they built as part of the Terminus Spaceflight Research Group (TSRG) operating under the auspices of the Space Hardware Club (SHC) at UAH, a part of the University of Alabama System.

The payload rocketed to a suborbital flight to space and back aboard a Terrier-Orion rocket out of NASA Wallops Flight Facility in Virginia on June 24, with 32 other university student projects in the NASA RockOn and RockSat-C programs. The last UAH student-led project to go to space was the SHC’s ChargerSat-1 in 2013.

“We were really happy it worked and we had data available the same day it launched,” says Ben Campbell, a master’s student in aerospace systems engineering who is TSRG’s founder and project manager. Campbell, a graduate research assistant who says his career goal is to become an astronaut, used his undergraduate spacecraft development experience and connections to teach the team to produce the device and then to get it into space.

“At the moment, we have a large collection of raw data that was recorded by all the sensors, and we are now in the process of correlating everything together to basically produce the big picture, or life story, of what our payload experienced during the mission,” Campbell says.

“We have things worked out for the initial ascent phase of the launch, where we have clear data indicating events such as the operation of the two stages that were used on the launch vehicle, and our crossing of the Karman line – which is the boundary of space that’s about 100 kilometers above sea level – at around 114 seconds after liftoff.”

The team is still going through data to determine activity while in space and when the rocket began to re-enter the atmosphere and splashed down in the Atlantic Ocean. The UAH payload has been retrieved by a boat team, brought back to land and is being shipped back to campus.

“The payload was essentially a small deck of electronics, about the size of a dinner plate, which hosted a suite of various sensors to monitor flight conditions throughout the mission,” Campbell says. 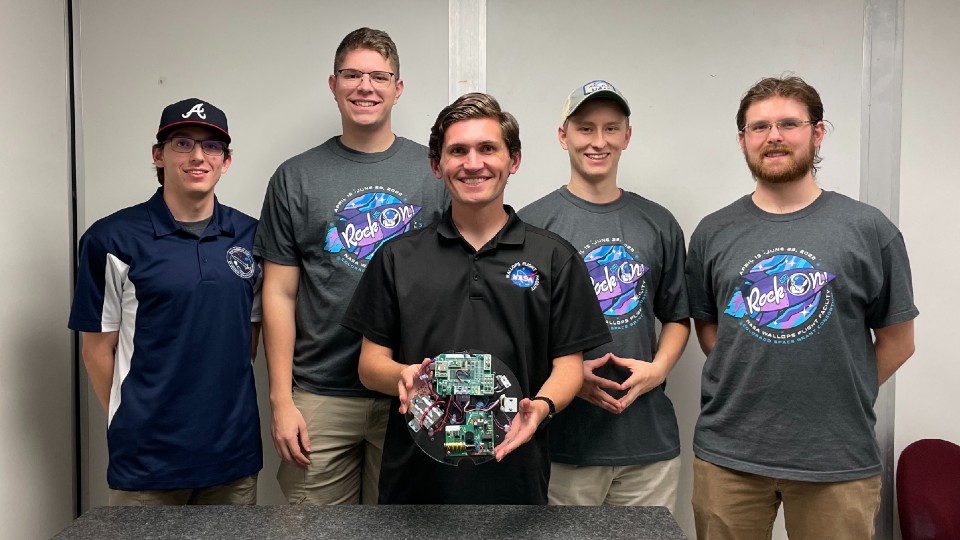 The payload was designed so students could use a collection of systems familiar to them from past work, such as common sensors, microcontrollers and other electrical components, and apply them to a spacecraft to be flown in suborbital space with all the design and manufacturing considerations that go into making a payload flight-ready.

Campbell has been working for over a year on TSRG, making use of contacts he made while in three CubeSat programs and two sounding rocket projects as a mechanical engineering undergraduate at Northwest Nazarene University in Nampa, Idaho.

“I started the group so I could try to use some connections and resources I have from my time prior to coming here to establish routine access to space for UAH to try and get us back to space,” he says. “Through that, I can use it as a way to give students here the opportunity to interact with NASA personnel and be involved in every step of spacecraft development beyond just building something and giving it to NASA, like what's traditionally done with a lot of CubeSat projects.” 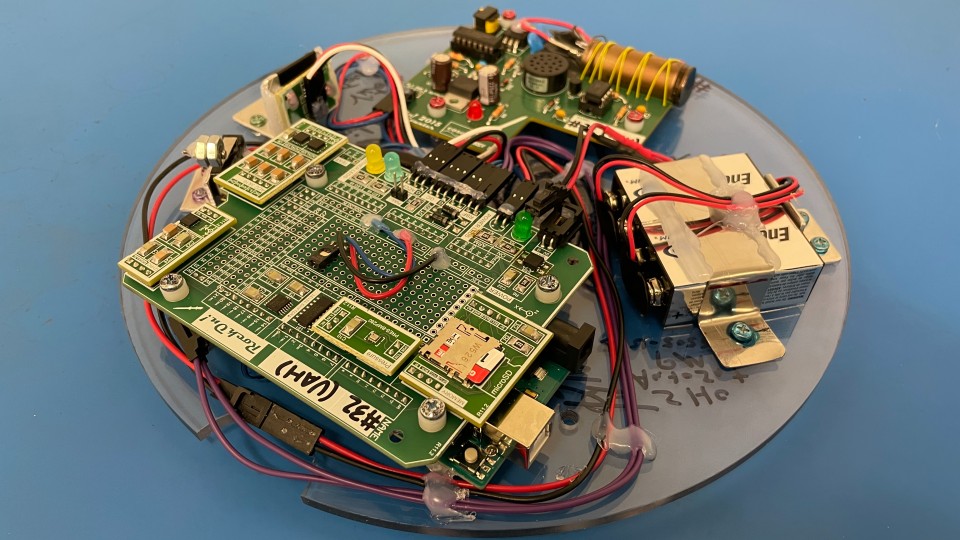 The goal is to have UAH students regularly building spacecraft and going to a NASA launch center to participate in activities like payload integration, sequence testing, vehicle assembly, launch pad prep, recovery and other activities.

The group aims to climb the levels of NASA’s student launch programs. NASA’s RockOn program is introductory suborbital spaceflight research, RockSat-C is the next level up with a larger payload size and RockSat-X is the third level, where there is maximum freedom of design and purpose. The three programs are a collaboration of the Colorado and Virginia Space Grant Consortia and NASA’s Wallops Flight Facility.

“With each program's increasing intensity, the students get to become more involved with the whole process of working with NASA, up to the point where students have the capability of helping assemble and test the rocket itself,” Campbell says. “There are tons of great and capable students in the SHC that want to send things to space, and this is one way I know to make that happen.”

Campbell credits Chris Koehler, a contact from his past who directs the Colorado Space Grant Consortium, with helping get the first TSRG project off the ground.

“He runs the RockOn, RockSat-C, and RockSat-X programs. He's a really awesome guy who knows a lot, has a passion for helping teach students about space, and is really fun to talk with,” Campbell says. “He was our main point of contact with getting things situated with us joining RockOn 2022 and everything supporting that.”

The team is considering future projects that include communications systems, propulsion technology, experimental avionics, geology, biology, heliophysics and atmospheric science. A possible mission to the lunar surface is also being discussed.

“One of the great things about the situation we are in right now is that, depending on the nature of different experiments, we can try to combine multiple experiments onto a single flight, and if some concepts don't get flown this coming year, we can try to pursue them a later year,” Campbell says.

“By working to establish routine access to space at UAH, Terminus will help enable future space missions supporting a wide field of research areas and help grow the technical expertise of UAH students.”