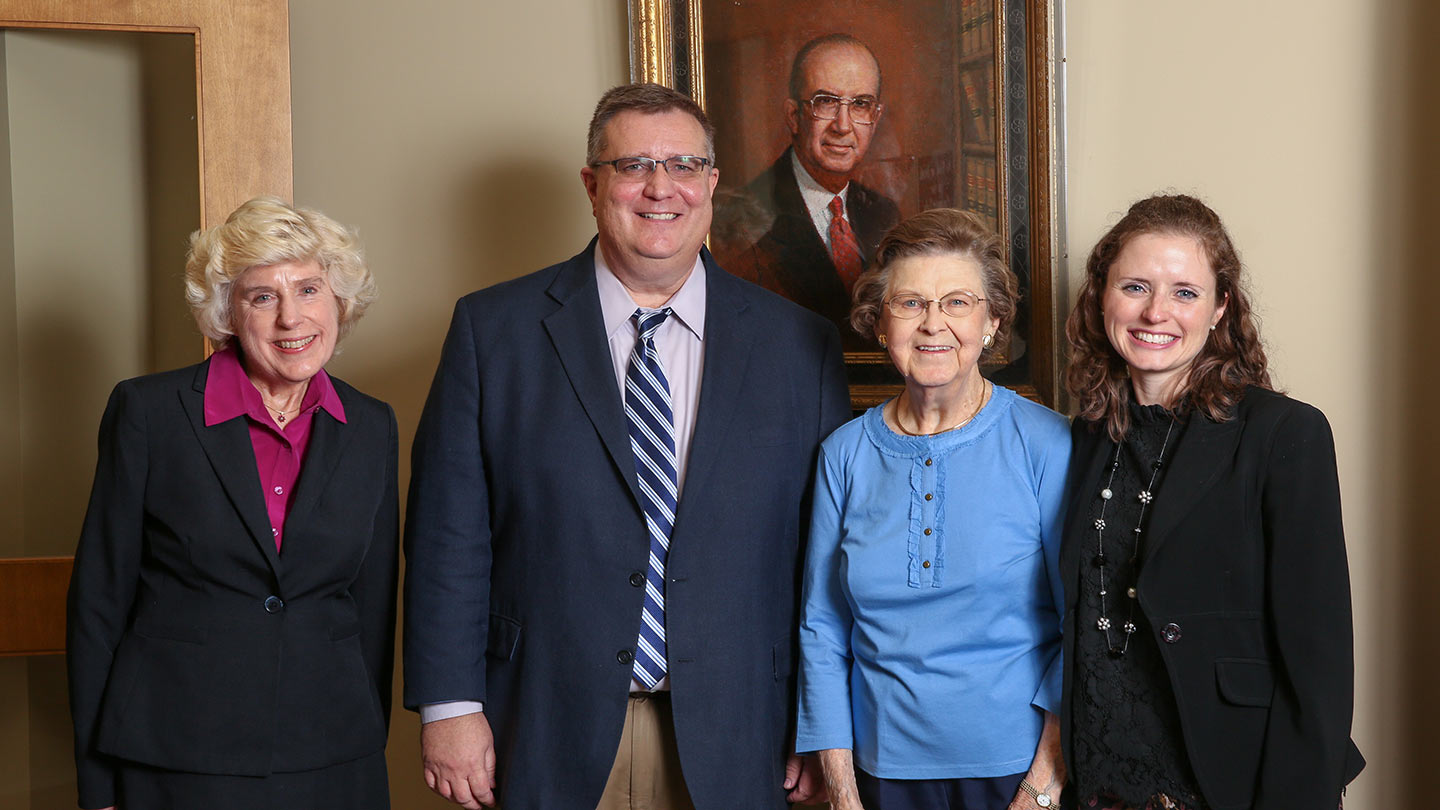 The University of Alabama in Huntsville (UAH), a part of The University of Alabama System, has announced that a gift has been received to name an interior space in the M. Louis Salmon Library. The new space will be named the Clarence Lee Watts and Inez Looney Watts Atrium in honor of Salmon’s father-in-law and mother-in-law, an especially fitting tribute to two individuals who not only shared this important connection with UAH through their son-in-law, but who also had a profound cultural and historical impact on north Alabama and far beyond.

A descendant of seventeenth-century American settlers, Inez Looney was born in West Limestone County in 1888. She graduated from Athens College in 1907 and later attended The University of Alabama, where she earned a bachelor of arts degree in 1910 as a member of one of the very first classes with women students.

Looney went on to teach English and Literature at Huntsville High School until 1915, when she married Clarence Lee Watts, a young attorney who had just lost a close race for the U.S. House of Representatives. After having five children, she returned to the classroom, teaching primarily English, Literature and History in Huntsville Junior High School until her retirement in 1951.

Inez Looney Watts was a member of the Alabama Historical Society and the Huntsville Music Study Club, and family members recall that hers was a lifetime of curiosity, intellectual pursuits and exploration. After graduating from The University of Alabama, she took a tour of Europe. She later happened to be visiting White Plains, New York, on Victory in Europe, or VE Day, in 1944, and rushed down to New York City where she was able to take part in the famous World War II celebration.

The Huntsville native proved to be ahead of her time in successfully combining a full family life with a satisfying career. Inez Looney Watts passed away in 1957, survived by a large extended family, including 13 grandchildren.

Clarence Lee Watts, was born in Deposit, Madison Co., AL, in 1886. After graduating from Huntsville High School and attending Bible School in Bowling Green, KY, he worked as secretary for his U.S. Congressman, William Richardson from Alabama’s 8th District. During this time Watts also studied law at Georgetown University, where he received his L.L.B. degree in 1913. That same year he was tapped as an Alabama delegate to the National Conservation Congress in Washington, D.C., and the following year ran for Congress himself, narrowly losing to E.B. Almon, the Speaker of the Alabama House of Representatives.

Watts later settled down to a legal career in Huntsville, AL, where he met and married Inez Looney Watts. Called “a lawyer’s lawyer” by his peers, he nevertheless seemed fated to live out his life in the relative obscurity of a small-town attorney. In 1936, however, Watts was thrust into the national spotlight when he accepted an invitation to form a legal defense team with Samuel Leibowitz, a Jewish-Romanian immigrant from Brooklyn, NY.

The northern attorney had been struggling to gain traction with juries consisting mostly of white southern farmers in a case in rural Alabama, and needed help. Thus, a strange and tragic chain of events brought this unlikely pair together on one of the most contentious and groundbreaking trials of the 20th century, the infamous case of the Scottsboro Boys, nine Black men accused of raping two white women in March, 1931.

Watt’s decision required a great deal of courage, and he accepted the challenge to take the case against much local advice and pressure. He was virtually the only white lawyer in the region willing to state publicly that the Black youths were innocent, and that the white woman was lying (the second woman recanted her story in 1932). 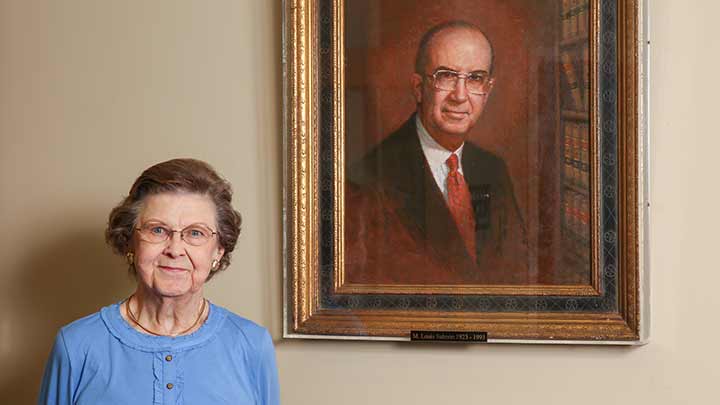 Elisabeth Whitten, widow of Louis Salmon, poses with a portrait of her late husband.

The first trial in 1931 had resulted in convictions and death sentences for all nine Black youths, all but one in their teens, but was subsequently overturned by the U.S. Supreme Court, on grounds the trial had been tainted by racism. Two further trials had brought inconclusive results as well, setting the stage for the dramatic fourth trial in 1936 with Clarence Lee Watts now acting as point man for the defense and responsible for the bulk of the actual litigation.

Watts battled exhaustion and illness through two grueling trials, at times enduring 101-degree temperatures within the stifling courtroom for 12 hours at a stretch. The Huntsville attorney doggedly sought acquittals for his clients in the face of numerous instances of judicial irregularities and prejudice. When the judge consistently upheld the prosecutions’ objections and denied those of Watts, the attorney requested a mistrial, yet his motion was denied.

In fact, the Huntsville lawyer’s lone “victory” proved to be a shocking and disillusioning one: the first defendant to go to trial was given a sentence of 75-years in prison rather than a death sentence. However, Watts’ heroic stance ultimately proved to be the turning point for the defendants, as subsequent proceedings freed four of the accused men in 1937 and finally the last in 1950.

Clarence Lee Watts later said, “It takes courage to do the right thing in the face of public clamor for the wrong thing…[But] when justice is not administered fairly, governments disintegrate, and there is no protection for anyone, man or woman, Black or white.”

Over the years that followed, Watts at last came to be regarded as a man of courage and principle in his home state. He went on to found a successful law firm of his own and died in Huntsville in 1963. His son, Dr. William P. Watts, remarked, “My father talked very little about his part in the Scottsboro case, either at the time or later. The Scottsboro Case was indeed a tragedy which dragged out to a somber, frustrating and disillusioning end. On the positive side, it hastened much-needed changes in the South to correct legal inequities for minorities.”

Maurice Louis Salmon Jr., for whom the UAH library is named, was born in 1923 in Mobile, AL. He fought in World War II, and after his military service he graduated from the School of Law of The University of Alabama in 1948. In 1950, Salmon moved to Huntsville where he entered law practice with his father-in-law, Clarence Lee Watts.

The naming of the library atrium is particularly appropriate, as Clarence Lee Watts and Inez Looney Watts introduced their future son-in-law to Huntsville and helped give him a warm welcome to his community and his career. It is especially fitting that the atrium named for Salmon’s in-laws can do the same, serving as a warm and welcoming entry to the UAH library for the entire Charger community and greater Huntsville family.