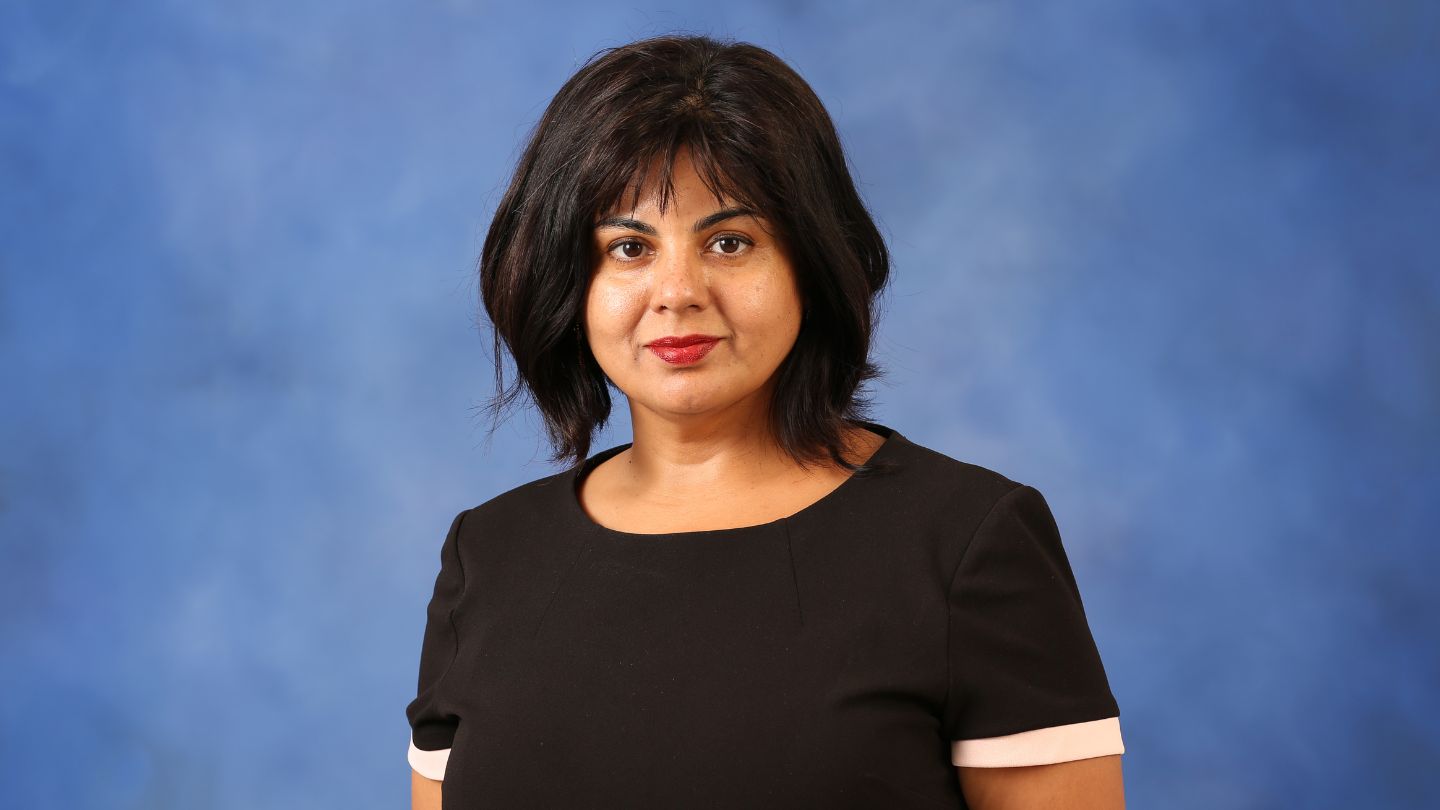 Dr. Sukanya Chakrabarti, the Pei-Ling Chan Endowed Chair in the Department of Physics & Astronomy, is the paper’s lead author.

The discovery of a so-called monster black hole that has about 12 times the mass of the sun is detailed in a new Astrophysical Journal research submission, the lead author of which is Dr. Sukanya Chakrabarti, a physics professor at The University of Alabama in Huntsville (UAH).

“It is closer to the sun than any other known black hole, at a distance of 1,550 light years,” says Dr. Chakrabarti, the Pei-Ling Chan Endowed Chair in the Department of Physics at UAH, a part of the University of Alabama System. “So, it's practically in our backyard.”

Black holes are seen as exotic because, although their gravitational force is clearly felt by stars and other objects in their vicinity, no light can escape a black hole so they can’t be seen in the same way as visible stars.

“In some cases, like for supermassive black holes at the centers of galaxies, they can drive galaxy formation and evolution,” Dr. Chakrabarti says.

“It is not yet clear how these noninteracting black holes affect galactic dynamics in the Milky Way. If they are numerous, they may well affect the formation of our galaxy and its internal dynamics.”

To find the black hole, Dr. Chakrabarti and a national team of scientists analyzed data of nearly 200,000 binary stars released over the summer from the European Space Agency’s Gaia satellite mission.

“We searched for objects that were reported to have large companion masses but whose brightness could be attributed to a single visible star,” she says. “Thus, you have a good reason to think that the companion is dark.”

Interesting sources were followed up with spectrographic measurements from various telescopes, including the Automated Planet Finder in California, Chile’s Magellan Telescopes and the W.M. Keck Observatory in Hawaii.

“The pull of the black hole on the visible sun-like star can be determined from these spectroscopic measurements, which give us a line-of-sight velocity due to a Doppler shift,” says Dr. Chakrabarti. A Doppler shift is the change in frequency of a wave in relation to an observer, like how the pitch of a siren’s sound changes as an emergency vehicle passes.

“By analyzing the line-of-sight velocities of the visible star – and this visible star is akin to our own sun – we can infer how massive the black hole companion is, as well as the period of rotation, and how eccentric the orbit is,” she says. “These spectroscopic measurements independently confirmed the Gaia solution that also indicated that this binary system is composed of a visible star that is orbiting a very massive object.” 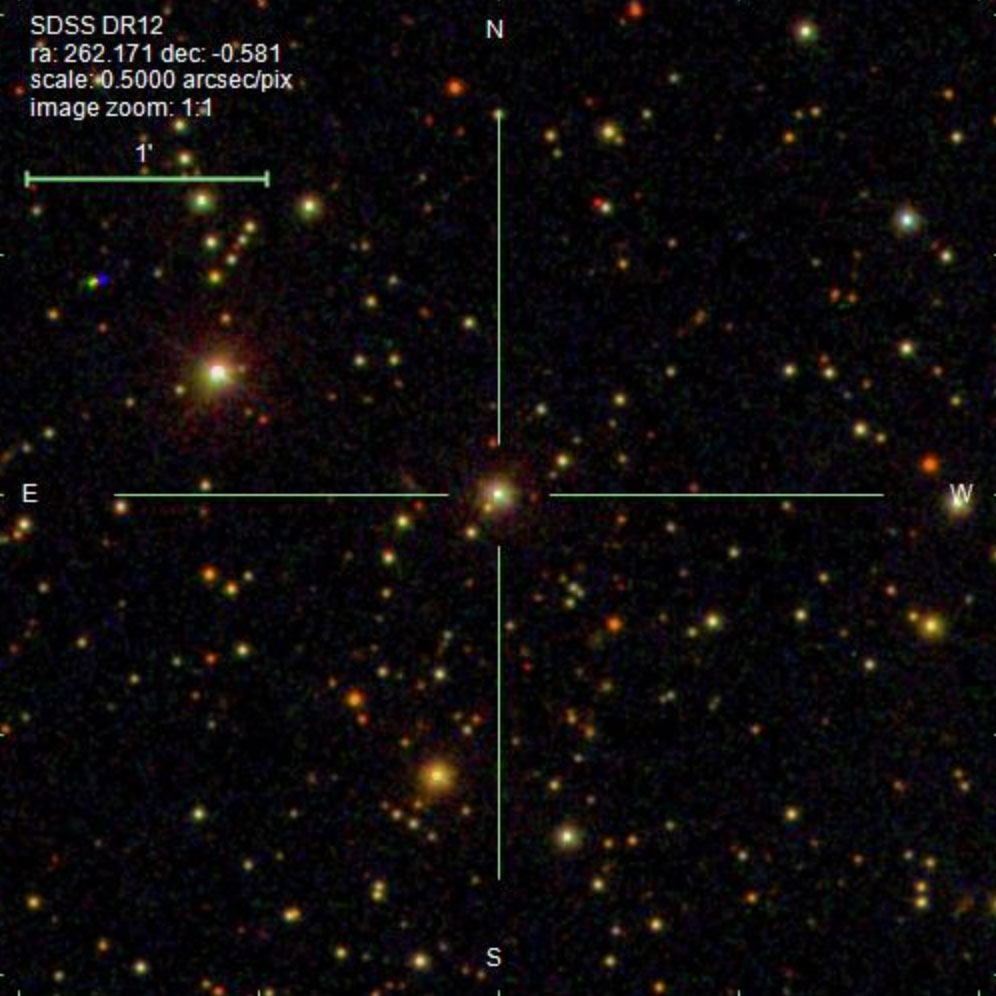 The cross-hairs mark the location of the newly discovered monster black hole.

The black hole has to be inferred from analyzing the motions of the visible star because it is not interacting with the luminous star. Noninteracting black holes don’t typically have a doughnut-shaped ring of accretion dust and material that accompanies black holes that are interacting with another object. Accretion makes the interacting type relatively easier to observe optically, which is why far more of that type have been found.

“The majority of black holes in binary systems are in X-ray binaries – in other words, they are bright in X-rays due to some interaction with the black hole, often due to the black hole devouring the other star,” says Dr. Chakrabarti. “As the stuff from the other star falls down this deep gravitational potential well, we can see X-rays.”

These interacting systems tend to be on short-period orbits, she says.

“In this case we're looking at a monster black hole but it's on a long-period orbit of 185 days, or about half a year,” Dr. Chakrabarti says. “It's pretty far from the visible star and not making any advances toward it.”

The techniques the scientists employed should apply to finding other noninteracting systems, as well.

“This is a new population that we're just starting to learn about and will tell us about the formation channel of black holes, so it’s been very exciting to work on this,” says Peter Craig, a doctoral candidate at the Rochester Institute of Technology who is advised on his thesis by Dr. Chakrabarti.

“Simple estimates suggest that there are about a million visible stars that have massive black hole companions in our galaxy,” says Dr. Chakrabarti. “But there are a hundred billion stars in our galaxy, so it is like looking for a needle in a haystack. The Gaia mission, with its incredibly precise measurements, made it easier by narrowing down our search.”

Scientists are trying to understand the formation pathways of noninteracting black holes.

“There are currently several different routes that have been proposed by theorists, but noninteracting black holes around luminous stars are a very new type of population,” Dr. Chakrabarti says. “So, it will likely take us some time to understand their demographics, and how they form, and how these channels are different – or if they're similar – to the more well-known population of interacting, merging black holes.”