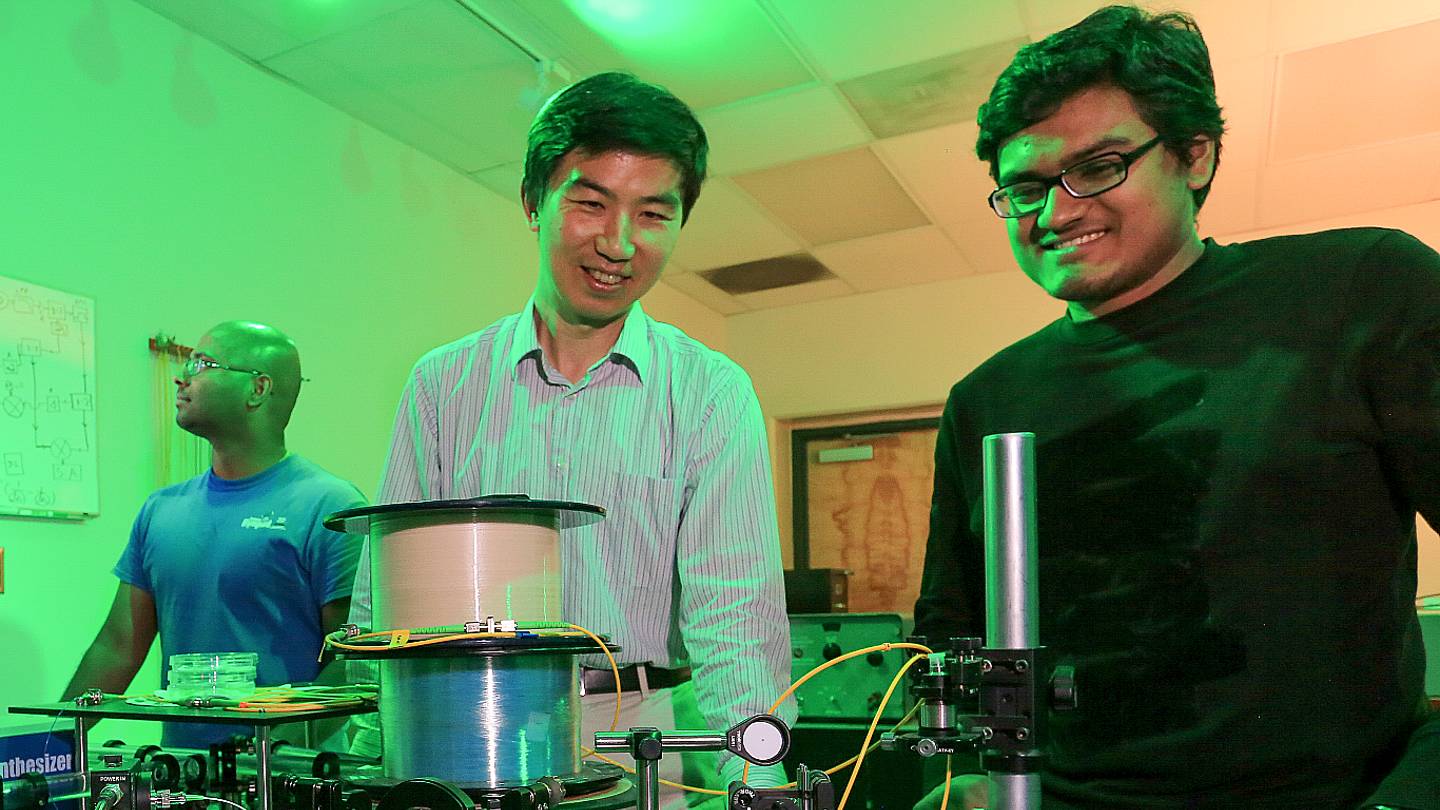 In research that could broadly benefit science, medicine and engineering, a new kind of ultrasensitive optical sensing instrument has been developed by a doctoral student at The University of Alabama in Huntsville (UAH).

Called a Mach Zehnder-Fabry Perot (MZ-FP) hybrid fiber interferometer, it combines the advantages of the two types of interferometers that are currently available, making it both compact and highly sensitive.

Precision measuring devices, interferometers work by creating a measurable interference pattern between two streams of light that can be thought of like the collision of two sets of waves in a pond that were created by throwing in two stones, says Dr. Nabil Md Rakinul Hoque.

Originally from Dhaka, Bangladesh, Dr. Hoque is a May 2022 UAH doctoral graduate in optical science and engineering, who developed the new interferometer under a National Science Foundation grant while advised by Dr. Lingze Duan, a professor of physics at UAH, a part of the University of Alabama System.

“The most important impact of this work, in my opinion, is that it lays out a feasible path toward reaching unprecedented levels of strain resolutions for passive fiber sensors,” Dr. Duan says. “Such a level of sensing resolution will allow fiber-optic sensors to pick up much weaker signals than they can right now and greatly broaden the application of fiber-optic sensors.”

Detecting extremely weak signals that formerly were not detectable by existing technologies makes the instrument valuable for a wide array of applications, says Dr. Hoque, the lead author of a recent paper published by Nature.

“This opens up such possibilities as early prediction of earthquakes, monitoring of weapons of mass destruction, glacier motion detection for climate change research, acoustic medical diagnosis and so on,” he says.

The UAH-developed interferometer achieves one femto-strain of resolution, meaning it can detect the change of one billionth of a micrometer (10-6 m) out of one meter.

“The main feature of the new interferometer is its unprecedentedly high signal resolution,” Dr. Hoque says. Optical sensors based on the new technology may find applications in medicine, he says. “For example, acoustic sensors based on our hybrid interferometer may be able to pick up very weak physiological acoustic signals that reveal human health conditions. Such signals might be too faint to be detected with the current sensors.”

“The first is the cavity/resonator-based interferometer, where specific resonance frequencies are allowed to pass or reflect from the interferometer,” he says.

The arm lengths often need to exceed tens or even hundreds of meters, making this type quite bulky. Mach-Zehnder (MZI) and Michelson interferometers are examples of traditional double-path interferometers.

“In this paper, we reported the development of a new kind of interferometer that embeds optical resonator-based interferometers, or the Fabry-Perot type, into a double-path interferometer, the Mach-Zehnder type,” Dr. Hoque says.

“The fiber sensor he developed has set new resolution records across a broad frequency span from the infrasonic range to the ultrasonic range and has successfully reached the so-called thermal-noise limit, the fundamental limit of all fiber-optic sensors.”