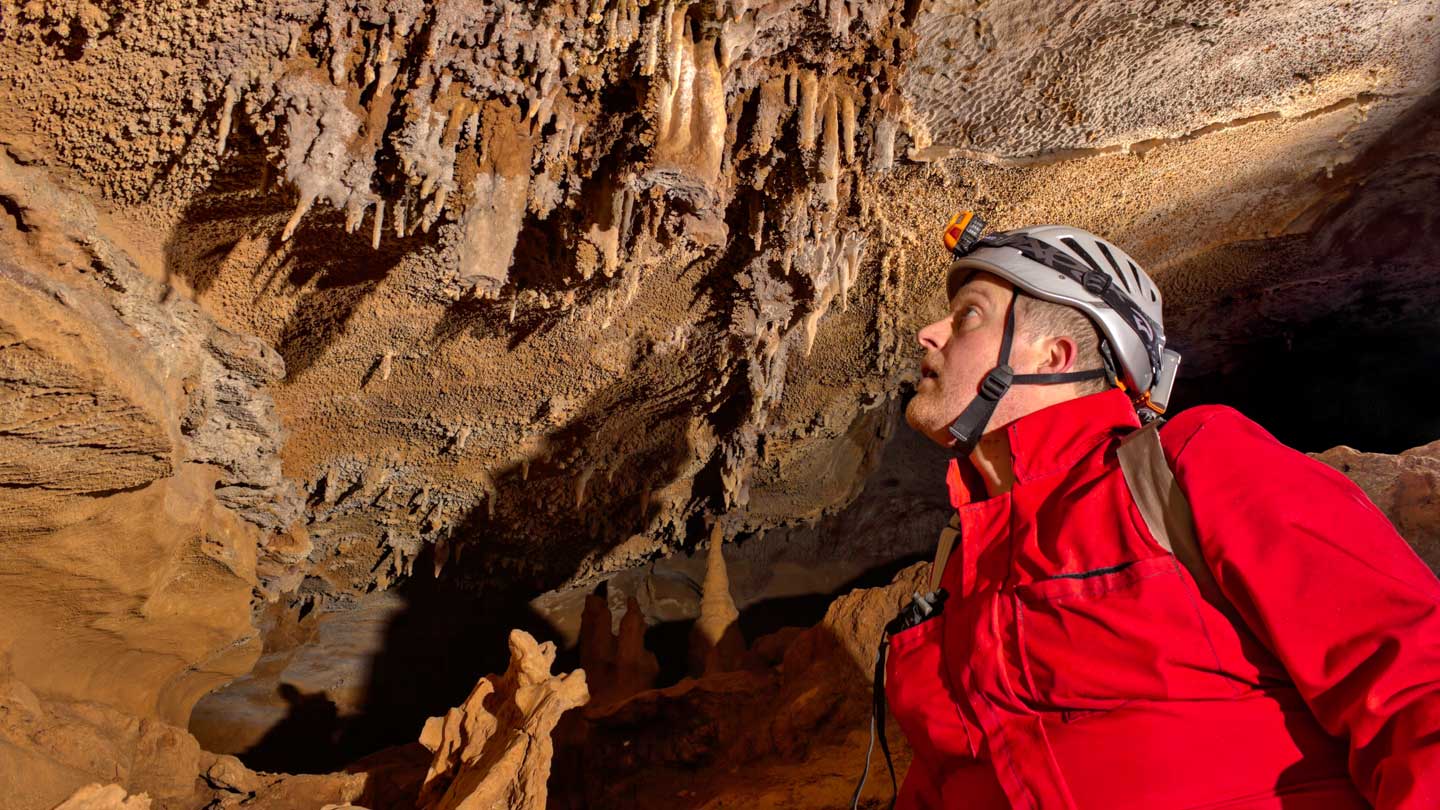 Dr. Matthew Niemiller during a biological survey of a cave in Coffee County, Tenn.

A proposal to conduct the first comprehensive assessment of groundwater biodiversity in the central and eastern United States has earned a University of Alabama in Huntsville (UAH) assistant professor of biological science a five-year, $1.029 million National Science Foundation (NSF) CAREER award.

"Groundwater, which is water found in aquifers below the surface of the Earth, is one of the world’s most essential natural resources,” says Dr. Matthew Niemiller, who has a lab in the Shelby Center for Science and Technology at UAH, a part of the University of Alabama System.

"For instance, of all the unfrozen freshwater on Earth, 97% is estimated to reside in groundwater aquifers," Dr. Niemiller says. An essential source for irrigation and drinking water, it is a challenged resource, he says.

"Exploitation of groundwater for agriculture and human consumption have resulted in aquifer depletion and environmental degradation in many regions of the world." Dr. Niemiller says.

"Other activities, such as mining and urbanization, have altered water flow patterns and increased levels of contamination in groundwater habitats," he says. "These stressors, as well as the current biodiversity crisis, have led to urgent calls to study groundwater life and develop effective strategies for protection and conservation."

The NSF-funded project offers the opportunity to develop novel approaches to studying biodiversity while generating broad hypotheses and tackling central questions in ecology and evolutionary biology, he says, and will provide valuable data for the management and conservation of groundwater species.

Since he arrived at UAH in 2017, Dr. Niemiller’s lab has focused on addressing important gaps in knowledge of subterranean biodiversity in the United States and in the Tennessee-Alabama-Georgia (TAG) region in particular, with a focus on groundwater.

"These knowledge gaps include understanding what species are present in caves, springs and other subterranean habitats as well as where are they distributed, how abundant they are, and better understanding aspects of their life history, ecology and conservation," he says.

The research will explore how long different species live, their habitat requirements, and potential and existing threats to their long-term term survival.

"Because human-sized caves only offer a small window into a complex subterranean environment and can be particularly challenging to access and study, we know relatively little about the vast majority of subterranean species," Dr. Niemiller says.

"We can now collect a sample from water, soil, a spiderweb or a flower, for example, then isolate and extract the DNA of organisms from that sample to identify, monitor and study a single species or the community of organisms living in various habitats," Dr, Niemiller says.

"Environmental DNA has been employed with great success in many different habitats and ecosystems and different groups of organisms, from endangered and invasive fishes to soil microbes and pollinators of wildflowers."

"We have the potential to leverage DNA from a groundwater sample to learn much more about entire populations and communities of organisms that are living in caves and other subterranean habitats, such as determining levels of genetic diversity and searching for species new to science," he says. "The darkness and stable environmental conditions in many groundwater habitats may promote long-term persistence of eDNA and recovering of longer DNA fragments."

Research aspects of the project will directly involve primary and secondary school students and educators, undergraduate and graduate students, two postdoctoral researchers and citizen scientists, with an emphasis on groups that are grossly underrepresented in caving and science.

Community Analysis of groundwater Via Environmental DNA (CaveDNA) is a community initiative that will involve undergraduate students, middle and high school science students and other local groups to monitor groundwater habitats.

"We will be sending water sampling and filtering kits to teachers and other educators in the TAG region, as well as learning modules to provide background information about eDNA and groundwater biology," says Dr. Niemiller. "My wife, Dr. Denise Niemiller, and I have developed other biodiversity and ecosystem learning modules for K-12, and she will be intimately involved in the educational and outreach aspects of this project."

Dr. Denise Niemiller is a lecturer in the Department of Biological Sciences.

Students will collect and filter water samples from caves, springs and wells to send to Dr. Niemiller’s lab to determine the species present. Data will be shared with teachers for classroom analysis and discussion, as well as incorporated into the research.

"Finally, this grant will support the development of an online portal for groundwater and cave biodiversity data and resources for future research, and support conservation and management efforts called the CaveBio Data Portal," Dr. Niemiller says. "The data portal will offer a network for maintaining and disseminating biodiversity and molecular data, publications and other resources for cave and groundwater fauna."