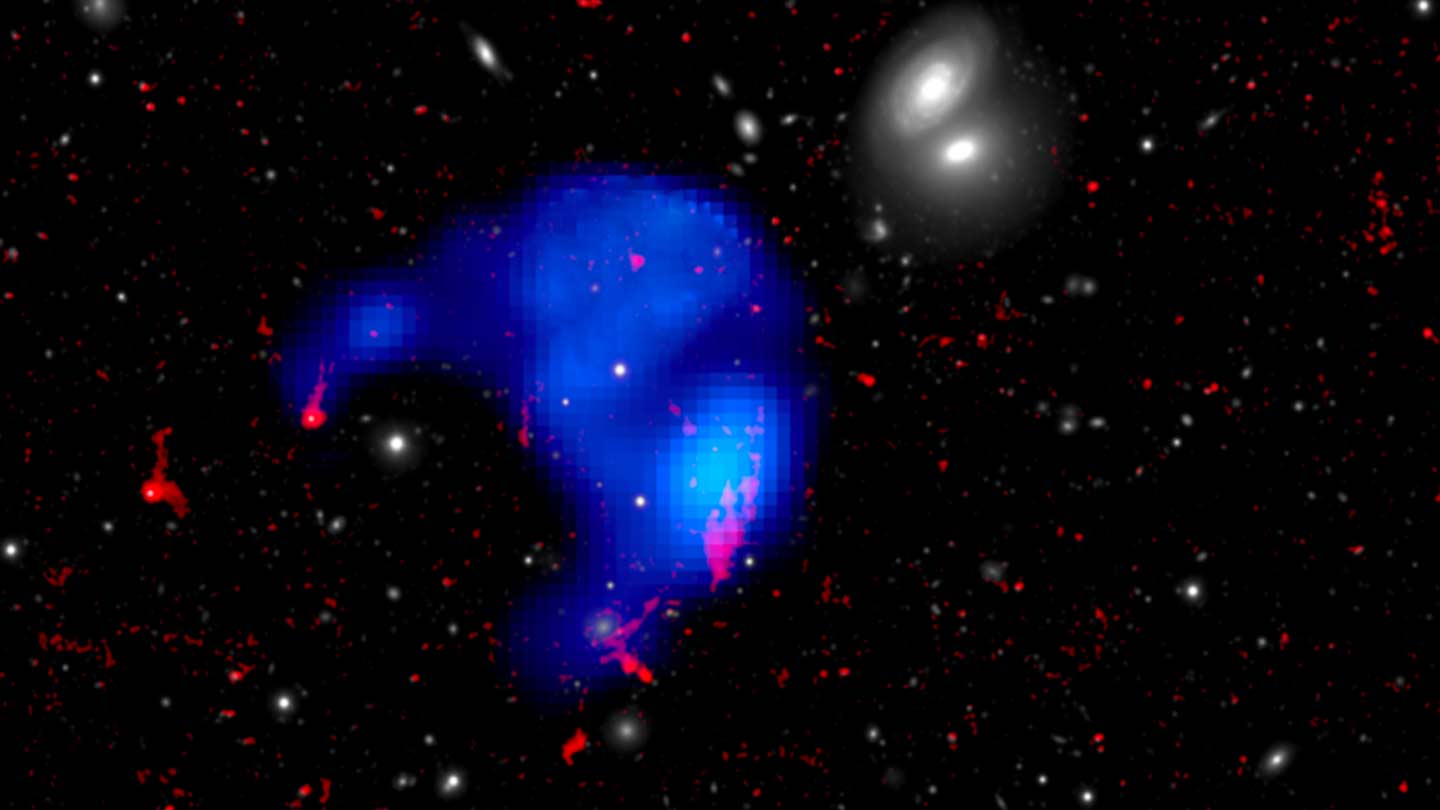 The orphan cloud is the blue umbrella-shaped part of this image, which is color-coded to show the X-ray part of the cloud in blue, the warm gas in red and the visible region in white.

A scientifically mysterious, isolated cloud bigger than the Milky Way has been found by a research team at The University of Alabama in Huntsville (UAH) in a “no-man’s land” for galaxies.

The so-called orphan or lonely cloud is full of hot gas with temperatures of 10,000-10,000,000 degrees Kelvin (K) and a total mass 10 billion times the mass of the sun. That makes it larger than the mass of small galaxies.

The cloud was discovered in Abell 1367 by a group led by Dr. Ming Sun, an associate professor of physics at UAH, which is a part of the University of Alabama System. Also called the Leo Cluster, A1367 contains around 70 galaxies and is located around 300 million light years from Earth. 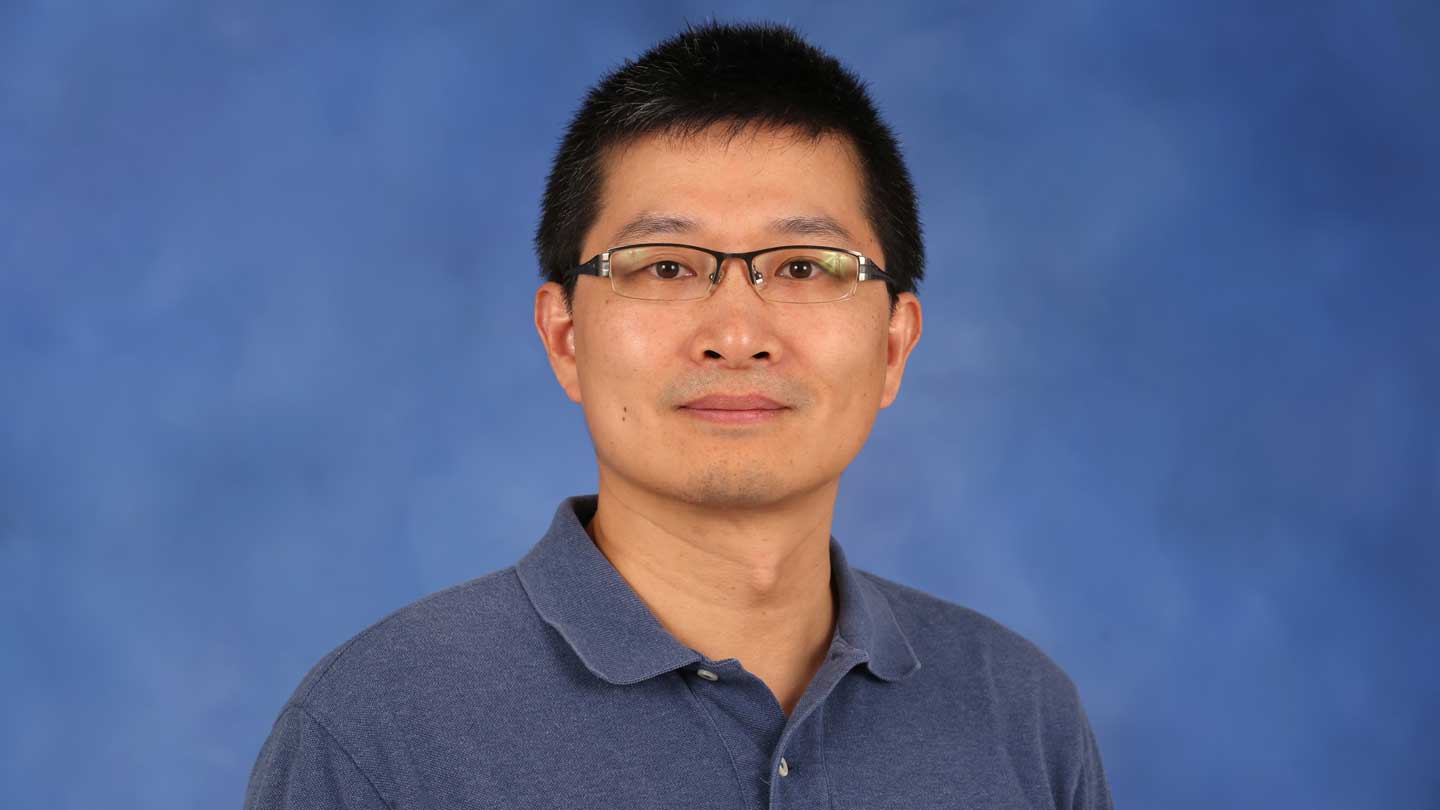 Dr. Ming Sun, an associate professor of physics, led the team that discovered the orphan cloud.

“This is an exciting and also a surprising discovery. It demonstrates that new surprises are always out there in astronomy, as the oldest of the natural sciences.” Dr. Sun says. “Apparently, ESA agrees as our discovery was selected as an ESA image release, which has been very selective.”

XMM took the X-ray image of the cloud and the optical images were taken by VLT/MUSE and Subaru. Except for the Subaru images, Dr. Sun is the principal investigator for the XMM and VLT/MUSE data.

“The cloud was serendipitously discovered in our XMM data,” says Dr. Sun. “The optical data come from our VLT/MUSE data and confirm the cloud is located in the cluster.”

The cloud was discovered in a cluster of galaxies where thousands of galaxies are bound together with tenuous hot gas with temperatures of about 100,000,000 K existing between them, says Dr. Sun.

“However, the cloud is not associated with any galaxy and is in a ‘no-galaxy's land,’” he says, adding that the cloud most likely originated from a large, unknown galaxy in the cluster.

That’s about 50 times faster than the orbital speed of Earth around the sun. That level of force at work can rip the interstellar medium out of a galaxy, and in this case the researchers found that the temperature of the cloud is consistent with having originated from a galaxy.

“It is like when your hairs and clothes are flying backward when you are running forward against a strong headwind,” Dr. Sun says. “Once removed from the host galaxy, the cloud is initially cold and is evaporating in the host intracluster medium, like ice melting in the summer.”

Yet it is estimated that this massive, mysterious cloud has survived for hundreds of millions of years after removal from its host galaxy.

“This surprising longevity is poorly understood but may have something to do with the magnetic field in the cloud,” Dr. Sun says.

The field may act to hold the cloud together by suppressing unstable forces that would otherwise cause it to dissipate, the scientists think.

With future study, Dr, Ming says that the lonely cloud and others that are yet to be discovered could help scientists better understand stripped interstellar mediums at great distances from their galaxies, as well as the effects of turbulence and heat conduction.

“As the first isolated cloud glowing in both the H-alpha spectral line and X-rays in a cluster of galaxies, it shows that the gas removed from galaxies can create clumps in the intracluster medium, and these clumps can be discovered with wide-field optical survey data in the future.”