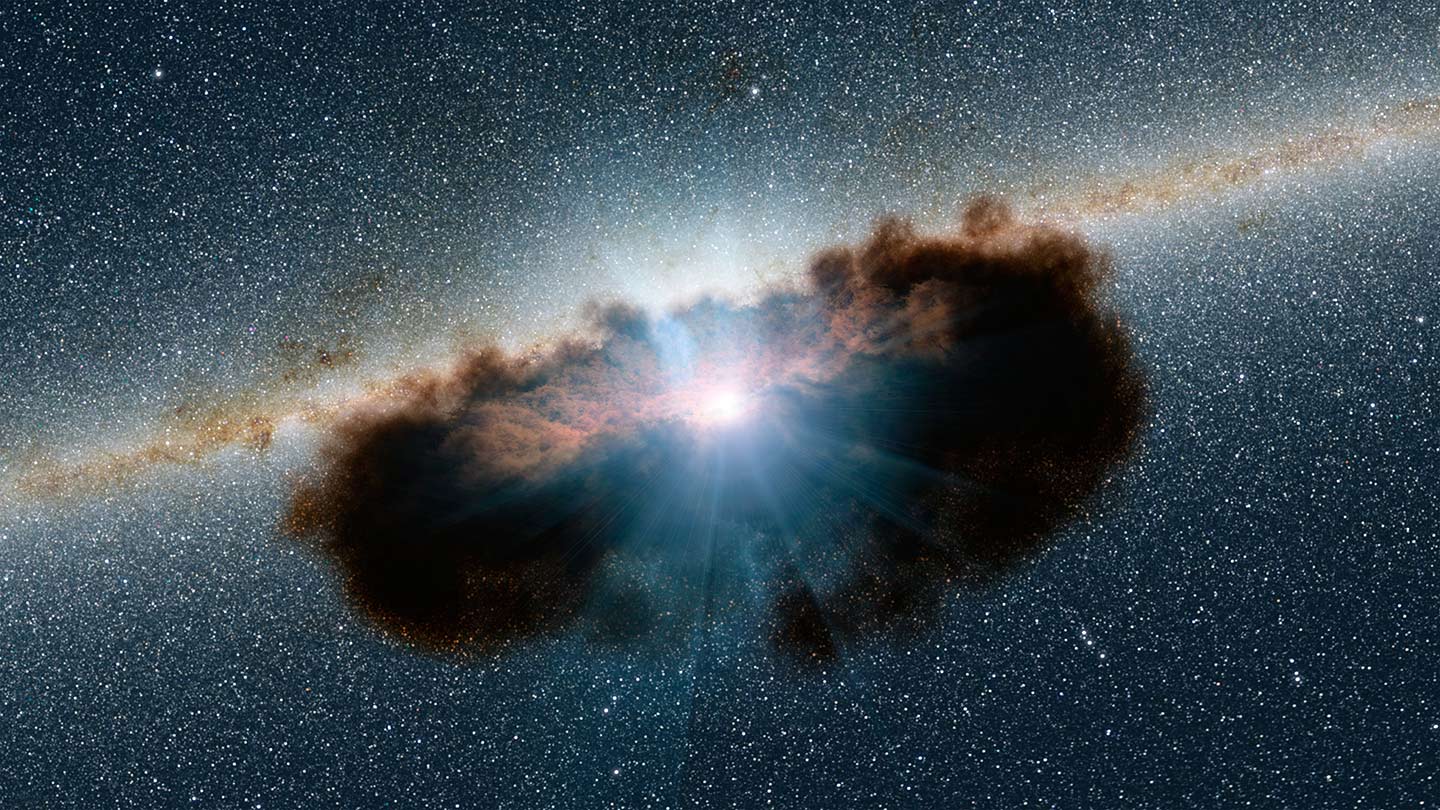 An artist’s illustration of an obscured supermassive black hole surrounded by extremely thick clouds of gas and dust.

A graduate student in the Department of Physics and Astronomy at The University of Alabama in Huntsville (UAH) is the lead author of a paper in The Astrophysical Journal describing the discovery of an intermediate-size black hole buried in gas and dust in a dwarf galaxy.

The discovery of the black hole of a previously undiscovered size may help provide clues about how such black holes were seeded in the very early universe.

Obscured from optical observation by heavy dust, the galaxy’s nucleus is powered by the newly discovered intermediate-class black hole, which makes up for size in its mass, says Shrey Ansh, the physics student at UAH, a part of the University of Alabama System.

Typically, galaxies have supermassive black holes at their centers and astronomers can observe them as the surrounding gas and dust fall into them.

“This is one of the first heavily obscured intermediate-mass black holes found in a dwarf galaxy,” says Shrey, who’s originally from India. 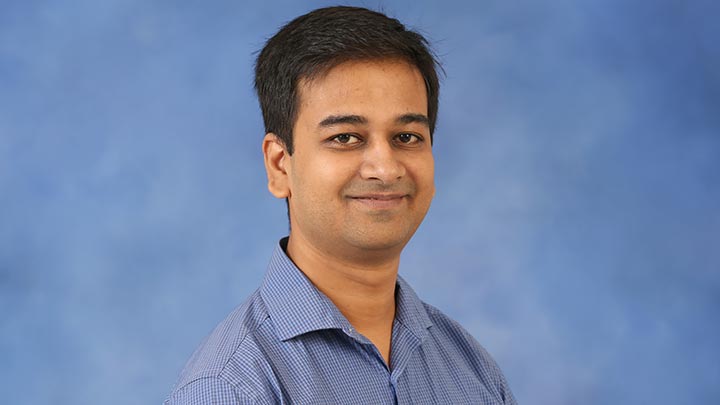 UAH graduate student Shrey Ansh is the lead author of a paper describing the discovery of an obscured intermediate-size black hole in a dwarf galaxy.

Though scientists may call it intermediate, there’s nothing midsized about this monster black hole, which contains 160,000 times the mass of the sun, except its size relative to smaller or larger ones. More massive than typical stellar-mass black holes that are only a few times the mass of the sun, it is smaller in size than the million to billion solar-mass supermassive black holes often found in galaxies.

Dwarf galaxies are thought to have undergone fewer galaxy mergers so they may serve as a type of fossil record of the very early universe that can inform scientists about how supermassive black holes came into existence in the first place, says Dr. Chen, the PI.

“We suspected that this dwarf galaxy could have a dust-obscured black hole based on its multi-wavelength properties,” Shrey says. “The amount of obscuring column density that we found could imply that a torus-like geometry found in supermassive black holes could extend into intermediate mass black hole class.”

A torus geometry means that the dust and gases surrounding the black hole are doughnut-shaped, so the view toward the accreting black hole might be blocked or obscured. High-energy photons such as X-rays can still penetrate through the intervening dust. Obscured supermassive black holes are fairly common, but it was unclear whether the intermediate-mass black holes in dwarf galaxies are surrounded by a similar structure.

Researchers utilized NASA's Spitzer Observatory to find the target based on its emission-line signature. Then they targeted the dwarf galaxy for X-ray spectral analysis with NASA’s Nuclear Spectroscopic Telescope Array (NuSTAR), which has its science operations at the California Institute of Technology and is managed by NASA’s Jet Propulsion Laboratory.

“The extracted X-ray spectrum was fitted with physical and phenomenological models and a Bayesian analysis was performed to estimate the column density posterior, which revealed that this particular system hosts a very heavily obscured black hole,” Shrey says.

“The research is also important because past surveys might have missed hidden intermediate-mass black holes, yet our research showed that such populations might exist,” Shrey says.

“It is important for measuring the fraction of dwarf galaxies with an intermediate mass black hole in the center, which may shed light on the big puzzle of formation of supermassive black holes in early universe,” Shrey says.

Dr. Chen says that the confirmation of the dust obscured monster in J1440 should give investigators a better idea about how and where to look for more of these objects by combining hard X-ray and mid-infrared emission line observations.

“Although Spitzer is no longer operating, it's got an even more powerful successor in the James Webb Space Telescope (JWST),” Dr. Chen says. “Combining JWST, NuSTAR and NASA's future hard X-ray missions, we should be able to find more of these tiny monsters lurking in our cosmic neighborhood, and get closer to having a complete census of the black hole population in dwarf galaxies.”