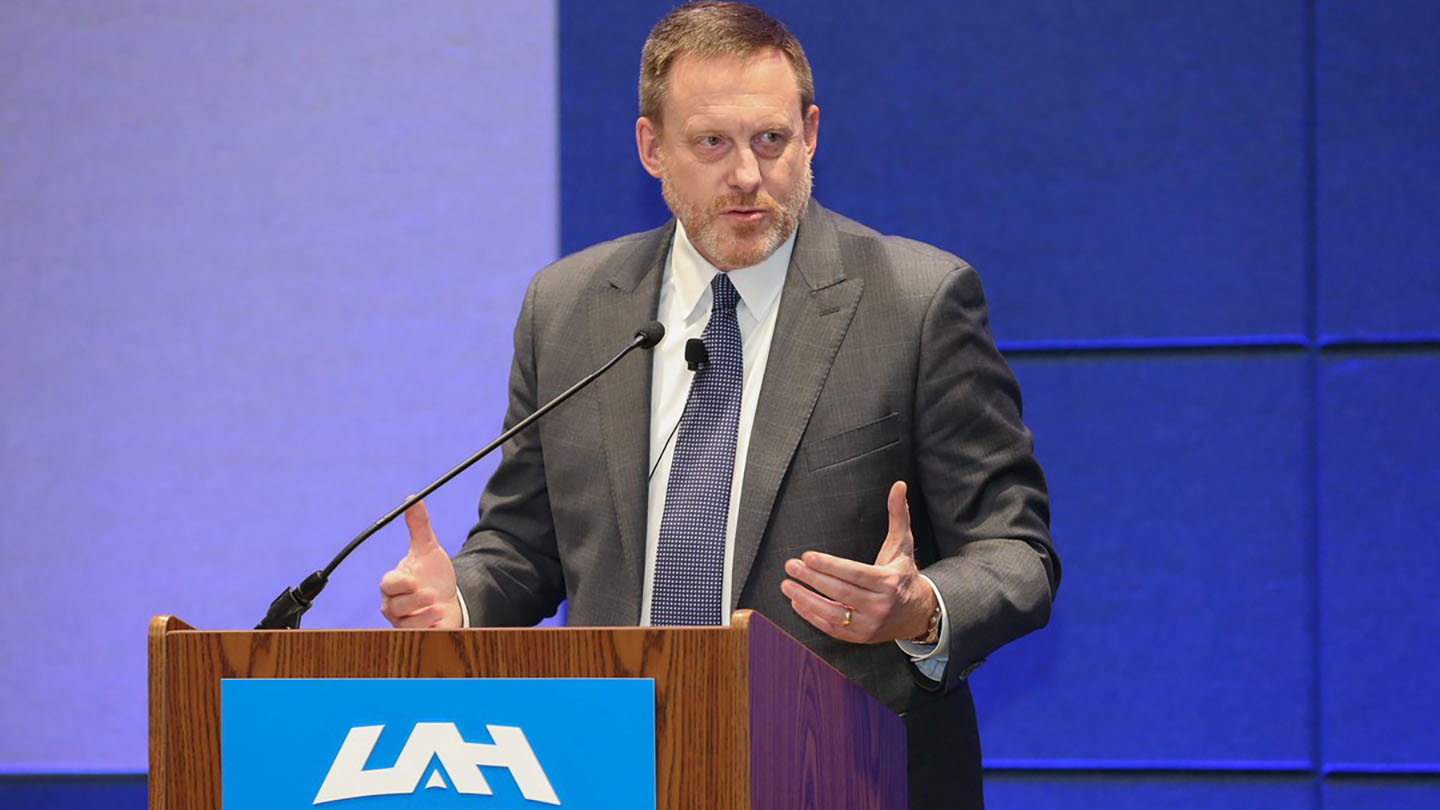 The consequences of a rapid rise in globalization should prompt the United States to think more broadly about its national security than it has historically, said Admiral Michael Rogers, the nation’s most recent former National Security Agency director, in a speech Tuesday, Nov. 30, at The University of Alabama in Huntsville (UAH), a part of the University of Alabama System.

Cybertechnologies, space exploration, global supply chain trade and the pandemic have blurred the traditional geographic lines that nations used to rely on to define their security needs, Rogers told an audience of cybersecurity and defense experts, and China is a new kind of competitor on that stage at a time when U.S. allies are questioning America’s commitment.

“We used to be very focused on a small subset of things, and we relied on the oceans as the great global buffers,” said Rogers, a retired United States Navy admiral who served as the 17th director of the NSA while concurrently serving as the second commander of the U.S. Cyber Command and as chief of the Central Security Office. “But cyber doesn’t recognize these boundaries.”

Rogers spoke at UAH as part of the university’s Distinguished Lecture Series. The series brings nationally recognized guest speakers to Huntsville to enhance community collaboration and assist the development of Redstone Arsenal. It fosters better understanding of current events and future trends, how they impact the federal organizations at Redstone and how they could influence U.S. reaction to world events and the nation’s future exploration, discovery and technological development.

As director of the NSA until 2018, Rogers oversaw the largest intelligence organization in the U.S. government, with a multibillion-dollar budget and tens of thousands of military, civilian and contract employees around the globe.

He prefers to think for now of China as a competitor rather than an adversary, Rogers said, but the Chinese economy and Chinese competitiveness are on the rise and China is on course to become the world’s largest economy.

Basic ideology is a major difference between the two nations. In China, the individual is subsumed into the whole, whereas the U.S. values individual rights and liberties foremost.

“We have never had a competitor that combined all the elements of power like China has,” he said.

The current situation with Taiwan is illustrative, Rogers said, and as a signatory to the one China policy, the U.S. is carefully managing its diplomacy. But he said that the agreement signed says that nations must join China willingly, without being pressured, and that has not appeared to be the case with Hong Kong or Taiwan.

“The U.S. accepts the premise of one China, but it is to be achieved without pressure, coercion or intimidation,” Rogers said.

The Taiwan question is made more critical for the U.S. by the fact that the vast majority of semiconductor chips are made there. Meanwhile, China sees Taiwan as a “red line” issue, Rogers said.

“In their minds, culturally and sovereignly, it is a part of China,” he said.

Yet there remains hope for diplomacy, Rogers said.

“As long as China believes that we still subscribe to the one China policy, we’re going to be all right.”

In space, the U.S. faces new and stiffer competition from the Chinese.

“We have not had a peer competitor in space since man went into space,” he said.

Economically, China has a different view of the traditional global economic matrix of the past 70 years, Rogers said.

“We believe fundamentally that China has taken advantage of the global economic structure,” he said. “I believe that we are fundamentally having an argument about what is the right framework for application of power.”

Cyberspace has given Russia and other foreign bad actors the opportunity to spread disinformation and has also promoted the rise of a more fractured American society, he said.

“We have a lot of hard problems, but we cannot come together to solve them,” he said, adding that the country needs to find a way to preserve the right of individuals to air opinions without attacking each other personally.

“We are taking on hard problems, and you can’t do that when you are screaming at each other,” Rogers said.

Global delivery and supply chain disruptions, the distribution of income, allies questioning the U.S. commitment to world affairs, the impacts of a changing climate and environment, and the prospect of losing its technological advantages are among the nation’s other national security threats, according to Rogers.

In addressing those and other global challenges, the U.S. brings many strengths to bear, Rogers said. Its democratic values, rule of law and focus on individual liberties are major assets, as is its economy.

“That’s not just because we are the largest economy, but because of how it is shaped,” Rogers said, adding that a consumer economy like the one in the U.S. is less impacted by global economic turmoil than an export economy is.

Other major strengths include the U.S. partners and allies worldwide and the nation’s penchant for innovation.

“We have been the most innovative nation in the world for the last 50 years,” Rogers said.

Rogers said the U.S. should think broadly about the national security implications of its resources, such as food, water and energy.

“We are not dependent on any other government for our sustenance, and that is a major advantage,” he said.

The U.S. is also self-sufficient in energy for the first time in 40 years, Rogers said.

“No country has energy leverage over us,” he said. “That gives us a lot of options.”

As well, he said the U.S. should mull the technological implications of national security, which could have large impacts on the nation’s investments and research in that area.

“Being a global technology leader has given us great strengths,” Rogers said.

Perhaps the nation’s greatest strength is its demographics, Rogers said.

“We are not aging out like China and Japan are,” he said. “In China, their demographics are all out of whack.”

As the result of its former one child per family policy, China’s population currently gets older ever year, he said, while India is on track to be the most populous nation by 2035, with 30% of Indians under age 25.

While U.S. national security has traditionally been outward focused, Rogers said the new paradigm requires the country to also focus on potential domestic security threats as it faces new challenges.

As the nation meets these challenges, it’s important to always remember that the U.S. remains a beacon of hope for so many people across the world, Rogers says.

“Literally, people will die to get here, because they believe that if they can get here, they can create better lives for themselves.”