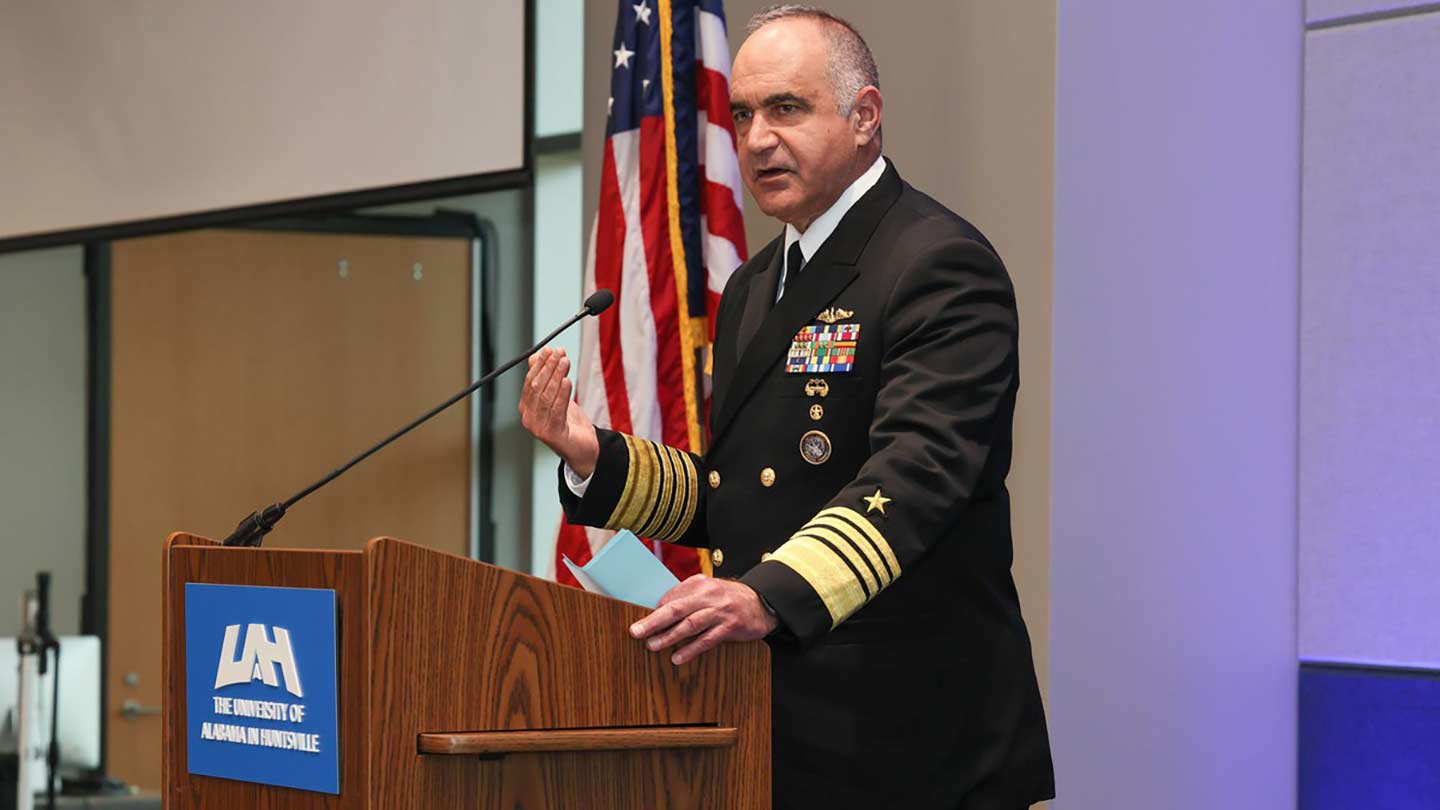 Events in Ukraine and Russia and a newly resurgent China mean that America needs to refocus and reinvest in its nuclear capabilities, said Navy Admiral Charles “Chas” Richard, a Decatur native who is the 11th commander of the United States Strategic Command (USSTRATCOM).

Richard told Redstone Arsenal officials, defense industry executives and local economic and political leaders at The University of Alabama in Huntsville (UAH) Student Services Building on Tuesday, May 17, that his command works at the top of its capabilities when nothing threatening or warlike happens to the United States.

Yet successfully applying and coordinating strategic deterrence and the country’s advanced nuclear submarine and launch on warning or attack capabilities means that the United States has not made the potential for nuclear warfare a top-of-mind priority for a long time, he said.

“In the Cold War era, people did think about the possibility of a nuclear attack,” Richard said at UAH, a part of the University of Alabama System.

“For 30 years, that has never happened,” he said. “That equals victory in strategic defense. My victory is when nothing happens.”

That victory was won by countless hours of vigilance and entire careers dedicated to making sure nothing happened, Richard said. That also means that the military as a joint force “has not had to seriously consider what competing in an armed conflict with a nuclear armed opponent is like in 30 years,” he said.

He cautioned that the nation should not assume a “they would never do that” posture when it comes to nuclear war.

“I worry sometimes that we forget how we got here,” Richard said. “We are at a pivotal point in history. It is changing right before our eyes.”

Richard assumed his current duties in November 2019. As commander of USSTRATCOM, he is responsible for one of 11 unified commands under the U.S. Department of Defense (DoD) and is the senior commander of unified military forces from all five branches of the military assigned to the command. USSTRATCOM is responsible for the global command and control of U.S. strategic forces to meet decisive national security objectives, providing a broad range of strategic capabilities and options for the president and secretary of defense.

He spoke as part of the UAH Distinguished Lecture Series, which brings nationally recognized guest speakers to Huntsville to enhance community collaboration and assist the development of Redstone Arsenal. It fosters better understanding of current events and future trends, how they impact the federal organizations at Redstone and how they could influence U.S. reaction to world events and the nation’s future exploration, discovery and technological development.

As the leader, steward and advocate of the nation's strategic capabilities, Richard defined strategic deterrence as the most important function of the DoD. He said that if the country doesn’t meet its strategic defense objectives, then all other functions of the military are degraded.

Part of his 3,000-member command is overseeing aging U.S. nuclear forces, including nuclear submarines built in the 1980s and 1990s, cruise missiles made in the ’80s and intercontinental ballistic missile (ICBM) systems created in the ’70s, Richard said.

“We are going to have to recapitalize those things,” he said. “The problem with nuclear is that people tend to put it into a box by itself. That’s just not the case anymore.”

The world runs on a set of international rules that were put in place to avoid another world war, Richard said, but belligerent revisionist powers Russia and China are not signing on to that world order.

“My job is to maintain our strategic deterrence,” he said.

Competition in crisis between two nuclear powers is less about their relative force strengths and more about who judges what is the greater stake and who is willing to risk for that stake, Richard said.

While top military and government officials are learning in real time from the unfolding Russian invasion of Ukraine, and Russia remains an important adversary of concern, Richard said the greater concern is a resurgent China.

The U.S. and Russia are constrained to 1,550 accountable deployed strategic nuclear warheads and bombs by the New Strategic Arms Reduction Treaty, but Richard said that the fact that Russia also possesses thousands of tactical nuclear devices is a concern.

“The thing I am worried about is limited use of tactical nuclear,” Richard said. “The good thing is, my command has been focused on that. We have been thinking about this class of problems for years.”

Another factor is the Russians’ dual-use weaponry.

“Almost all of the ordinance shot into Ukraine is being shot from dual-capable launchers that can also fire nuclear weapons,” he said.

On the other hand, the Chinese, who Richard defined as in a strategic breakdown, are undergoing a “breathtaking expansion” of their nuclear capabilities.

“Since 1964, China maintained a minimally deterrent nuclear force, but that has changed and it has changed very quickly,” Richard said. China has doubled its nuclear stockpile since 2019, he said.

“They’ve gone from zero to about 360 ICBMs in about two years,” he said, adding that the Chinese capabilities in air-launch bombers, ballistic submarines and command and control have also grown dramatically and that the Chinese are developing a launch on warning or attack capability, as well as space launch capabilities.

“What they have figured out is, you cannot confront a fully tailored strategy like ours with a minimally deterrent strategy,” Richard said. “It’s the final step of them putting together a military strategy capable of unifying Taiwan with the Chinese mainland by 2027, which is their stated goal.”

He praised the integrated deterrence policies put into place by U.S. Secretary of Defense Lloyd Austin, in which all resources are applied together to deter threatening acts of opponents.

“It must be underpinned and backstopped by nuclear,” he said. “When you are facing people who have a unilateral ability to unleash any degree of destruction or violence, that becomes very important.”

Richard said that because of America’s advanced strategic deterrence, he thinks the probability for a “bolt out of the blue” nuclear attack is low, and that STRATCOM is “laser-focused” on nuclear threats from Russian President Vladimir Putin.

“We are confident that we can maintain our deterrence right now.”