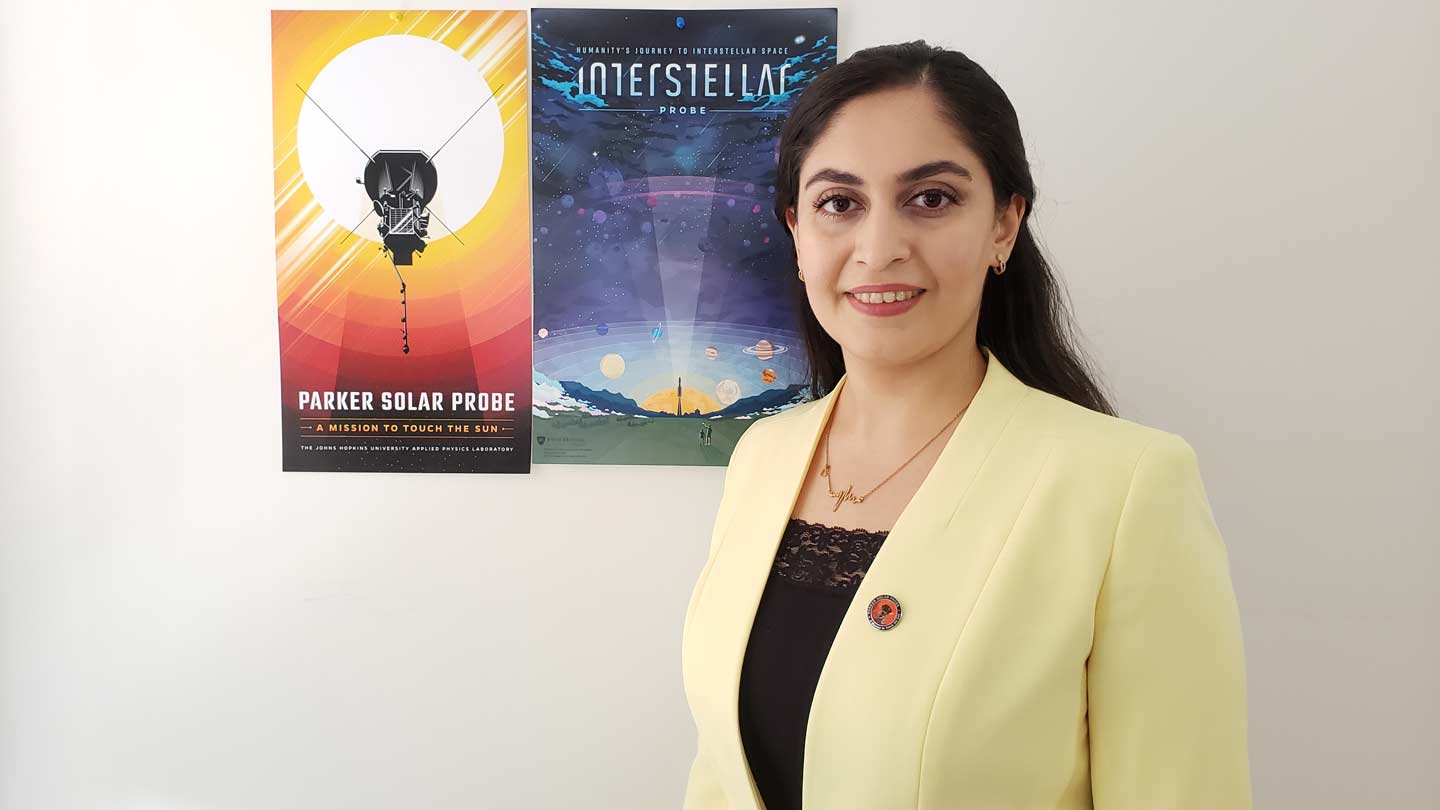 The American Geophysical Union (AGU) announced today that Dr. Parisa Mostafavi is the 2020 Space Physics and Aeronomy Fred L. Scarf Award honoree. Dr. Mostafavi has a BS in engineering physics and a master's in plasma engineering. She was awarded her PhD in space science, supported for three years by a NASA Earth and Space Sciences Graduate Research Fellowship, at The University of Alabama in Huntsville, a part of The University of Alabama System.

The Fred L. Scarf Award is given annually to one honoree in recognition of an outstanding dissertation that contributes directly to solar-planetary science. The honoree is chosen from nominees submitted from throughout the world. The award is presented at the AGU Fall Meeting and awardees are invited to deliver a talk on their dissertation topic at the meeting. Award recipients receive a $1,000 prize, recognition in Eos, the AGU publication of Earth and space science news, recognition at the AGU Fall Meeting during the award presentation year and complimentary registration to the Space Physics and Aeronomy section event during the lecture presentation year.

The AGU Sections Honors Team made the announcement. Dr. Mostafavi was nominated for the award by Dr. Gary Zank, director of the UAH Center for Space Plasma and Aeronomic Research (CSPAR) and chair of the Department of Space Science.

“The Fred Scarf Award is an international competition and intensely competitive,” Dr. Zank says. “To the best of my knowledge this is a first, certainly for UAH, and I believe Alabama. Parisa studied the effect of energetic particles on shock waves, which can have implications for space weather in the vicinity of the Earth. Parisa also investigated the effect of energetic particles on the structure of the so-called heliospheric termination shock, for which a unique set of observations was provided by the Voyager 2 mission. Another aspect of her work explored the structure of shock waves in the very local interstellar medium, finding, quite remarkably, that the structure of those shocks, now observed by the Voyager 1 mission, is dominated by different physical processes than shock waves in the interplanetary medium. This turned out to be quite a surprise and very unexpected. It is this body of work, and especially the explanation for the structure of weak shocks observed in the very local interstellar medium, that earned Parisa the award.”

“I am deeply honored to receive this award,” says Dr. Mostafavi. “I am grateful to many people who helped me along the way to achieve my goals. Specifically, I would like to express my deepest gratitude to my PhD advisor, Dr. Gary Zank, for his continuous support. The completion of my dissertation would not have been possible without his support and nurturing. He is a real role model for me.”

Dr. Zank worked closely to guide his protégé in this effort. “Parisa was my PhD student, so we worked extensively and wrote numerous papers together. She also attended all the classes I taught. So we have had a long and productive time as student and mentor.”

“I am also thankful to Dr. Dave McComas for the opportunity to join the Space Physics group at Princeton University,” Dr. Mostafavi says. “His advice and support are very valuable to me. I met Dr. McComas at some conferences, and we talked about collaboration and what we can do about my research and IBEX. He invited me to join his team at Princeton as a Visiting Student Research collaborator. That was a great opportunity for me to work with the Space Physics group at Princeton.”

Dr. Zank agrees. “The work being done by Dave McComas was very closely related to Parisa's thesis work, so it fitted well, and she wrote a nice paper with Dave McComas, me and a former UAH SPA PhD graduate working there as an Associate Research Scholar.”

Dr. Mostafavi is no stranger to recognition, having garnered the UAH College of Science Graduate Research Award in 2019. As a UAH doctoral student, she received support from NASA's Earth and Space Science Fellowship (NESSF) program to investigate how the sun mediates fundamental forces that affect space weather, leading to her nomination for the prize.

“We presented a model that developed a general theoretical study of shock structure,” she says. “We then applied this theory to shocks in different space regions, such as the outer heliosphere, the heliospheric termination shock, the heliosheath and the interstellar medium. The results have provided a very useful understanding of the shocks in these regions and could explain some of the questions that were raised by Voyager 1, 2 and IBEX.”

Each year sections of the AGU recognize outstanding work within their scientific discipline by hosting nearly 25 named lecture presentations and presenting more than 30 awards and prizes. Awardees in various stages of their careers represent some of the most innovative minds in their disciplines and are chosen for their meritorious work or service toward the advancement and promotion of discovery in Earth and space science.

“I have been very fortunate to work at all of these wonderful places,” Dr. Mostafavi says. “The people at UAH, Princeton and APL are very friendly and helpful. The UAH faculty at Space Science department have taught me to understand the physics of problems deeply with the Space Science courses. They were always available and enthusiastic to discuss about research. Most importantly, I have the most wonderful family. My parents and my husband are very supportive. They have taught me to work hard for the things that I aspire to achieve.”

Dr. Mostafavi is currently a Post-Doctoral fellow at the John Hopkins University Applied Physics Laboratory (APL) and a Visiting Research Collaborator at Princeton University. These days she works on modeling the inner heliosphere using data from the Parker Solar Probe.

“The award obviously is a recognition of Parisa's work and abilities, but it reflects too the international recognition that Space Physics and Aeronomy (SPA) has in the field of space science that we can attract the best and the brightest graduate students,” Dr. Zank says. “Our students have now won numerous NESSF and FINNEST awards for several years now. The SPA faculty are all highly recognized in their fields with certainly the largest concentration of awardees at UAH, meaning students want to join a department that is known in the field all over the world. The faculty are well-funded, and students are supported as Graduate Research Associates during most of their time as graduate students, allowing them to focus fulltime on their research. We are graduating as many PhDs in the field of space physics as anyone in the U.S.”

What does the future hold for the newest Fred L. Scarf honoree?

“I am working on many interesting projects with some of the best scientists at the APL,” Dr. Mostafavi notes. “In the Theory and Modeling group, we use our GAMERA MHD model to simulate the inner heliosphere at unprecedented resolution. This model is unique and can help us to study waves and instabilities generated in the solar wind. APL is the home of the Parker Solar Probe (PSP), a mission to unlock the mysteries of the Sun's corona and solar wind for the first time. I am a member of the PSP Project Science team, and I analyze some of the recent PSP observations.

“In another project, we are analyzing the science opportunities and practical implementations of a future Interstellar Probe mission,” Dr. Mostafavi says. “I am delighted to work here and can work on all these wonderful projects. Sometimes I wish I could skip sleeping to work nights as well.”