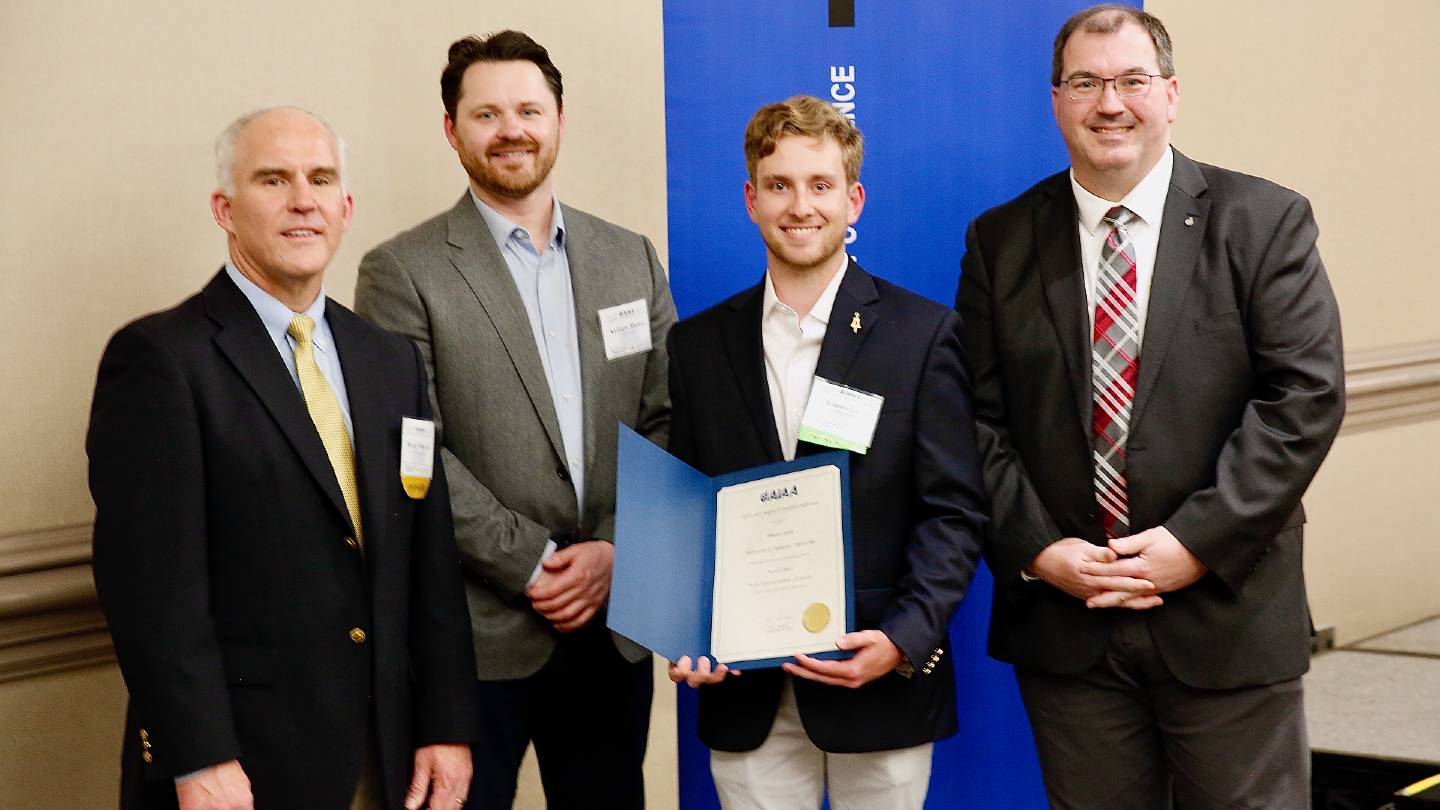 A graduating senior at The University of Alabama in Huntsville (UAH) who is working to develop a micro-aerial vehicle that can fly like a monarch butterfly has won second place for his paper in the American Institute of Aeronautics and Astronautics (AIAA) Regional Student Conferences Region II Undergraduate Category.

“Thomas approached me with his interest while taking MAE 330 - Fundamentals of Aerodynamics,” says Dr. Kang. “He has worked very hard since then. I am very happy with his achievements.”

During the AIAA conferences, more than 170 papers were presented by university and high school students across six regions, with over 500 students and professionals in attendance.

“I had won first place for the College of Engineering at UAH's Research Horizons Day back in March, but I did not think that this would correlate to winning an award at a conference where students from all across the Southeast were presenting their work,” Clark says.

“The monarch is one of the most efficient fliers among insects and offers a good basis for design,” he says. “The vehicle is entirely 3D printed. The wings were designed using computerized tomography (CT) scans of actual monarch wings that were then turned into computer assisted design (CAD) models.”

Clark designed, printed and assembled all the components of his vehicle and he is working on getting it airborne.

“Currently, the vehicle does not fly,” he says. “It is a little too heavy. Also, I need to work on smoothing out the gear interactions that drive the wings.”

The vehicle is in its second design version. It has a main body that is 1 inch long by 1 inch wide by 1 inch tall and it weighs 8 grams.

Development of a version that is capable of sustaining flight has Clark working in the Autonomous Tracking and Optical Measurements (ATOM) Lab located in UAH’s Olin B. King Technology Hall.

“In the lab, we have a test stand consisting of 12 Vicon cameras and a force transducer,” he says. “I can use the setup to simultaneously measure the motion of the wings and the force generated by the vehicle.”

Successful development of these type vehicles would lead to applications on Earth and off, Clark says.

“On Earth, the vehicles can be used for information gathering and scanning. Due to their small size, many can be carried easily in place of a single large drone,” he says.

“A fleet of these vehicles can scan an area much faster than a single large drone.  This has applications in the fields of search and rescue and exploration.”

Off Earth, Clark says that NASA has a project known as the Marsbee that works to develop flapping wing drones for the exploration of Mars. Marsbees are dynamically scaled bioinspired Martian robotic flight vehicles that benefit from scaled up animal flight mechanisms.

“The Marsbee project is attempting to design flapping wing drones that can be carried by a rover and deployed to scan the surface,” Clark says. “My work could help others in developing their own micro-aerial vehicles.’

He’ll continue the project for his master's thesis at UAH.

Clark’s work continues a legacy of award-winning research into using the mechanics of butterfly flight to power very small drones by Dr. Kang and by Dr. D. Brian Landrum, an associate professor of mechanical and aerospace engineering who died in January, that has been funded by the National Science Foundation and others.

AIAA holds conferences in each region for university student members at the undergraduate and graduate levels. The student conferences are a way for students to present their research and be judged on technical content and presentation skills by AIAA members working in the aerospace industry. Lockheed Martin sponsored the conferences.