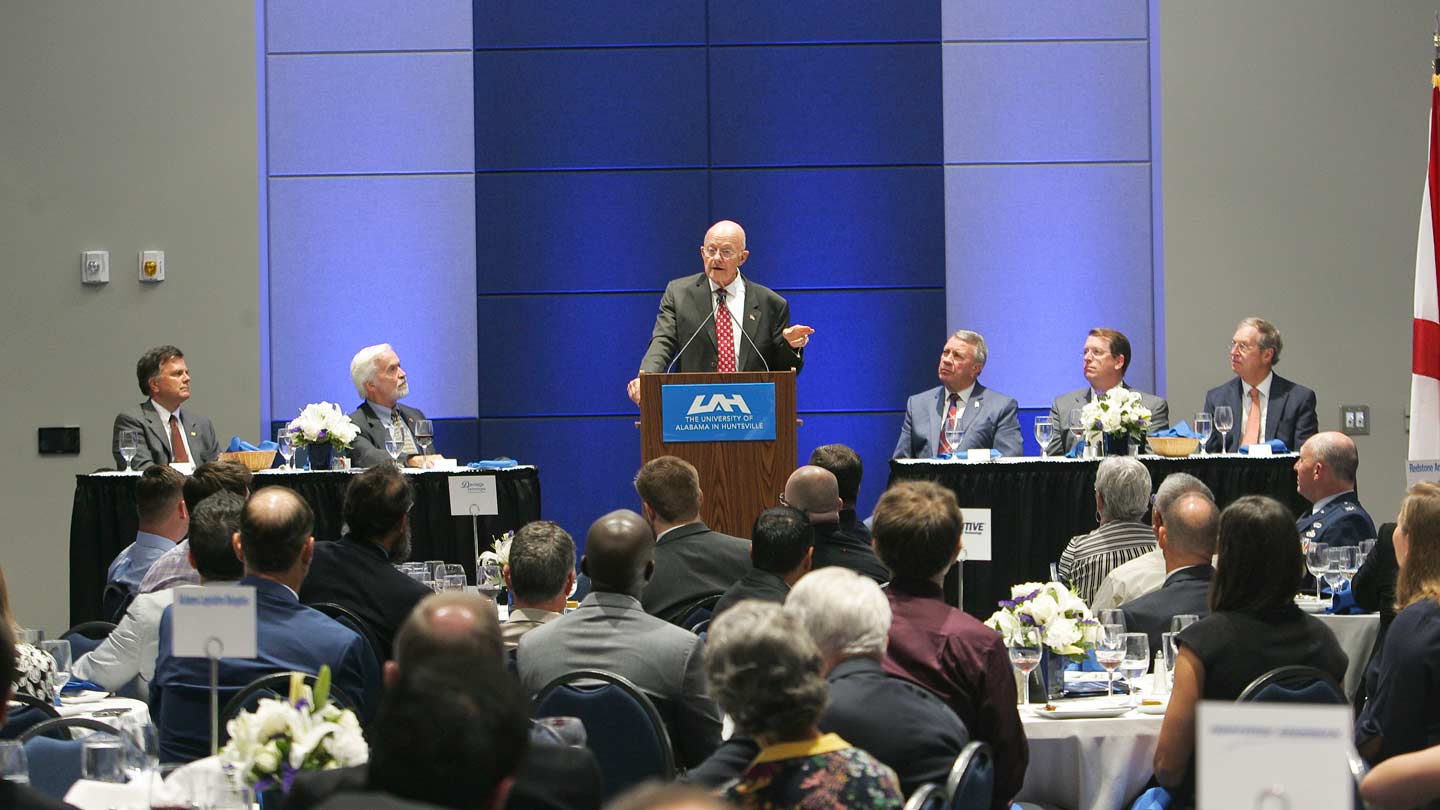 Global geopolitical events during the next 30 years will test the resilience of the United States, particularly in regard to chief adversaries Russia and China, former U.S. Director of National Intelligence James Clapper said Wednesday in a speech at The University of Alabama in Huntsville (UAH).

"How we manage to sustain and protect the attributes of our resilience will be what makes all the difference, and really that is up to us," he said, adding that he is confident the country can rise to the challenge as it has risen to other challenges in its past.

The retired U.S. Air Force lieutenant general, who has more than 50 years of military and intelligence experience, also told Redstone Arsenal officials, defense industry executives and local economic and political leaders in the audience that he is "not a big proponent of the Space Force as a separate branch of the services."

A Space Force would only require about 20,000 people and at that size is too small to be a separate branch, Clapper said.

"If the issue is not enough emphasis – money – being placed in space, then OK, but we do not need a separate force," he said. Raising the issue will result in more attention being paid by the other branches of the military, Clapper said.

Clapper spoke at UAH as part of the university’s Distinguished Lecture Series. The series brings nationally recognized guest speakers to Huntsville to enhance community collaboration and assist the development of Redstone Arsenal. It fosters better understanding of current events and future trends, how they impact the federal organizations at Redstone and how they could influence U.S. reaction to world events and the nation’s future exploration, discovery and technological development.

Clapper served from 2010 to 2017 as the fourth director of national intelligence, the nation’s top intelligence official and the principal intelligence advisor to the president. He held one of the broadest portfolios in the government, overseeing 200,000 intelligence employees internationally, a $52 billion budget and high-profile organizations like the CIA, NSA and FBI.

Russia and China pose the greatest existential threats to the U.S., Clapper said. To a lesser degree, North Korea and Iran are also troublemakers for the U.S.

"Russia remains the greatest near-term threat over the next five years, or as long as Putin is around," he said, referring to Russian President Vladimir Putin. "Russia poses a fundamental threat to our institutional way of life, and we give them an easy target."

The Russians have engaged in robust cyber espionage that includes "implants in our infrastructure that are just sitting there ready to be used when they see fit," Clapper said. Moscow also possesses a doomsday nuclear weapon that could create death and destruction along the U.S. East Coast and is probably operating in violation of nuclear treaties in several areas of weapons development, he said.

"Putin has a tremendous resentment of the U.S.," Clapper said. "Plus, the fact that he was a KGB officer colors how he thinks about us."

Russian submarines regularly run reconnaissance on the U.S. undersea cable communications network that carries a lot of vital communications traffic, Clapper said, resulting in the re-establishment of the U.S. Navy’s Second Fleet in the North Atlantic in response to Moscow’s assertiveness.

"Their reconnaissance has assumed Cold War proportions," he said.

Clapper said Russian interference in the U.S. internally includes election interference and also a broad effort to sew doubt, dissension and distrust among American citizens in order to discredit the government and cast doubt on the veracity of truth.

"I never expected such a direct, aggressive and multifaceted attack on our systems as the Russians did in 2016," said Clapper, who played a pivotal role in uncovering the likely parties at work behind the 2016 hack of the Democratic National Committee and who briefed then-incoming president Donald Trump at Trump Tower in 2017 on Russian election interference intelligence.

He said Trump was reluctant in that meeting to accept any intelligence that might be construed as questioning the legitimacy of his election and has been reticent to establish a hard line with Putin on the subject.

"The evidence for the magnitude of Russian interference is overwhelming – just the forensic evidence – and it is very disturbing to me that he won’t call him out on that," he said. "I felt a duty and an obligation, after spending 50 to 55 years in defense of our country, to speak out about that."

Although Clapper said he told Trump no evidence of collusion had been found, he said attempting to establish collusion is a "standard Russian technique, and I am sure that they employed it in the Trump organization in order to try to get something going."

While Moscow is a formidable near-term threat, the long-term outlook for Russia is not good, Clapper said. The country remains reliant on a mineral extraction economy and it has a large population of aging males that in the future will render it militarily unable to mount a sustained conventional campaign.

China is the longer-term existential threat to the U.S. and is uniquely so because the Chinese and U.S. economies are so inextricably intertwined, Clapper said.

"The fact that our economies are so well bound together moderates that threat to some degree," he said. Still, the Chinese economy is on course to surpass the U.S. by 2020 and become the largest economy in the world.

China’s focus on becoming an economic power, its science and technology push, its penchant for stealing intellectual property, its "One Belt, One Road" drive to modernize infrastructure, its deals with other countries to build infrastructure in exchange for access to raw materials and its trade practices all are continuing threats to the U.S., said Clapper.

"Trump’s got a point," when it comes to trade, tariffs and China, he said. But those trade efforts may be limited by a ballooning U.S. debt.

"What I worry about is, the Chinese own a lot of our debt, and if they should decide to call in that debt, it could cause major economic problems for us," Clapper said. "Our greatest long-term internal threat is our debt."

The Chinese are setting specific areas in science and technology where they want to dominate, he said, and in June 2016 China surpassed the U.S. in supercomputing.

China is also modernizing its military in the areas where the U.S. has strengths.

Yet the greatest impediment to Chinese expansionism is its aging population, Clapper said, and projections show that future pension funding could become a major economic problem for the country.

"A growing population that’s growing older, with growing demands, will make it harder for the Chinese government to keep stability," he said.

China is interested in North Korea as a buffer between U.S. forces in South Korea and itself, Clapper said.

"What China doesn’t like is North Korea imploding, and they lose their buffer state."

He served in South Korea in the mid-’80s as director of intelligence on North Korea and describes the atmosphere in North Korea as "paranoid."

"My views on North Korea were heavily influenced in 2014 when I went there to get two of our citizens out from imprisonment in forced labor," he said. "North Korea is not going to denuclearize. Pyongyang went to school on Libya’s Muammar Gaddafi and they know how that turned out."

North Korea presently has enough fissionable material to create 30 to 60 nuclear weapons, Clapper said, and he believes it has the means to deliver them, as well. In the North Korean view, having that capability makes it an equal with the U.S.

"I believe the reason for their ‘good behavior’ is that they believe they have what they need for deterrence," Clapper said.

President Trump lost an opportunity to leverage his recent visit with North Korean leader Kim Jong-Un, he said. "He did not leverage the simple fact that he was there, which was seen as an incredible event inside North Korea."

Clapper said an opportunity to ask what North Korea would need to feel secure without nuclear weapons and to attempt to define what each country means when it talks about denuclearization was lost.

"When Pyongyang looks south, it sees a formidable conventional army arrayed against it," he said. "They realize the profound conventional disparity between themselves and South Korea."

He’d like to see the U.S. and North Korea establish interest section offices with each other to normalize relations and prevent misunderstandings, as the U.S. did with Cuba. An interest section is staffed below the level of ambassador and provides a conduit for information purposes, as well as intelligence abilities. Establishing a Pyongyang office would also provide a measure of assurance to North Korea that the U.S. would not bomb its capital, Clapper said.

South Korean President Moon Jae-in is "an extremely astute leader," Clapper said. "They have a more intense interest in reducing tensions." That intensity makes close coordination between South Korea and the U.S. priority, he said.

In the Mid-East, "there is no question that Iran is a serious threat, in terms of its missiles and its proxies," Clapper said.

As far as he knows, Iran remains in compliance with the Joint Comprehensive Plan of Action under which it destroyed much of its nuclear production capability, Clapper said.

"But for whatever its own reasons were, our administration chose to back out of this deal," he said. "I don’t believe we’ll ever put Humpty Dumpty back together again, in terms of the kind of international cooperation it takes to get another deal. What we did played to the hardliners in Iran."

While Iran is a major concern, its role as a disruptor is limited by its faltering economy, internal corruption and consequent high inflation and unemployment, Clapper said. These forces have sparked demonstrations fueled by information spread through millions of cell phones.

"I believe the revolutionary theocrats are on the way out," he said.

Globally, Clapper said the U.S. role is currently in a state of flux.

"There is great uncertainty among our allies about our long-term leadership role," he said. "When people are in trouble and they call for help, they don’t call for Russia or China or some other country, they call for us."