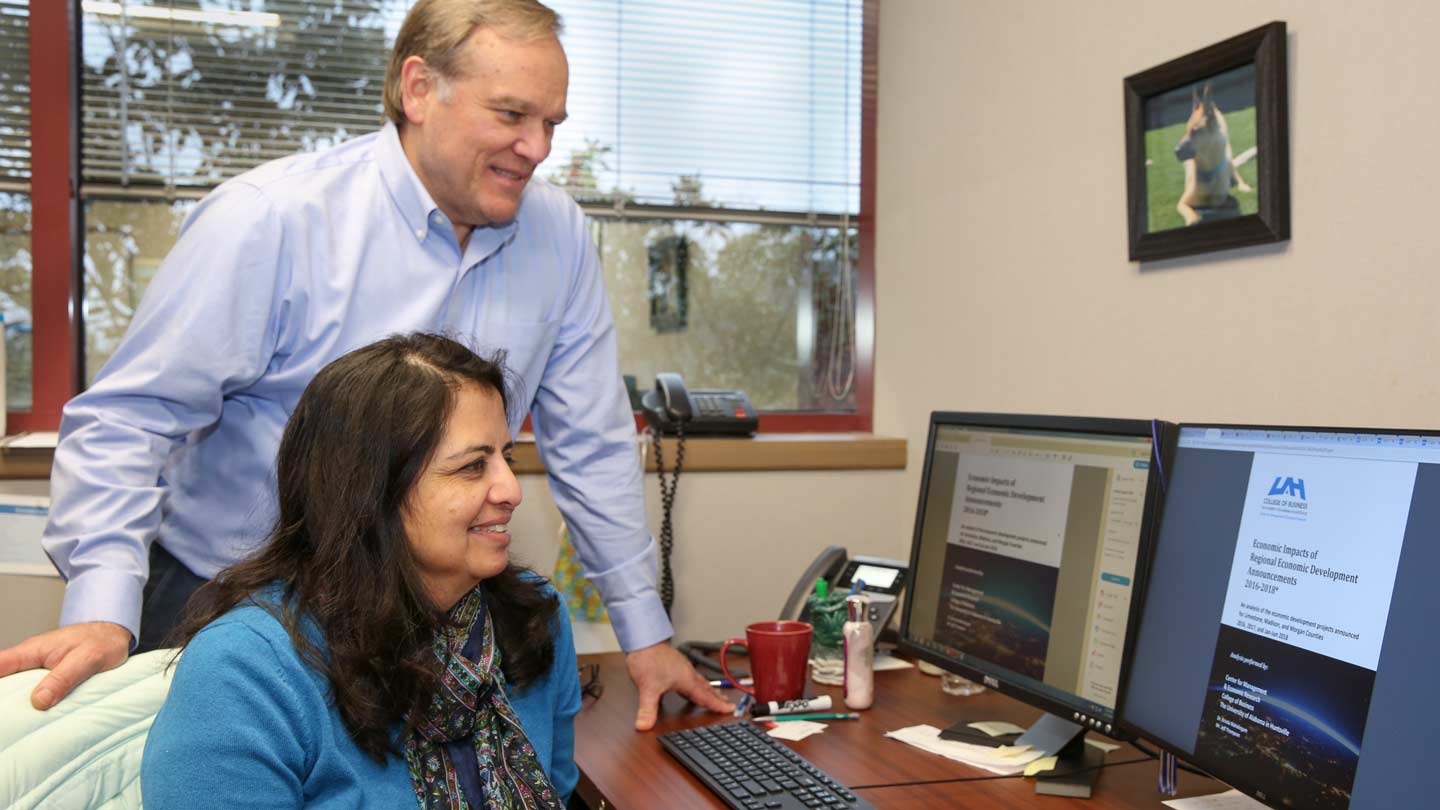 Jeff Thompson, a project director for UAH’s Center for Management and Economic Research, and Dr. Brinda Mahalingam, a lecturer in UAH’s College of Business, partnered to produce a report that analyzed the economic development projects announced for North Alabama between 2016 and 2018 for the Huntsville/Madison County Chamber of Commerce.

North Alabama’s reputation as a high-tech business hub with a bright economic future has been growing in recent years, with Huntsville in particular being recognized as one of the best places to live in the nation by "U.S. News & World Report" and as one of America’s superstar cities by the "Wall Street Journal." Not surprisingly, as word has spread about the advantages of living and working in the region, more and more companies are announcing plans to either relocate or expand their operations in response, to include space exploration company Blue Origin, propulsion specialists Aerojet Rocketdyne, automotive giant Mazda Toyota Manufacturing U.S.A. Inc., and automotive supplier BOCAR, among many others.

But what does all of this mean for those of us who live here? If these announcements come to fruition as intended, what effect will it have on our workforce, our taxes, our public school systems, our infrastructure, and our housing market? That’s what the Chamber of Commerce of Huntsville/Madison County and Huntsville-Madison County Airport Authority wanted to find out, and so they turned to Dr. Brinda Mahalingam, a lecturer in the College of Business at The University of Alabama in Huntsville (UAH), and Jeff Thompson, a project director for UAH’s Center for Management and Economic Research.

"With this great period of economic expansion comes questions from the community leaders and the public, so what we do is help the community understand the impact these developments or changes will have on the economy," says Thompson, who estimates that he and Dr. Mahalingam have done nearly two dozen projects together over the years. "And that’s where a university like UAH can realistically do the best job of understanding those impacts. Because we live here and understand the local economy, we have a tremendous capability to help the region understand how it responds to changes, good and bad – that’s our secret sauce."

We live here and understand the economy.

At the behest of the Chamber and the Huntsville-Madison County Airport Authority, the pair recently completed a report entitled "Economic Impacts of Regional Economic Development Announcements 2016-2018," which in turn was a follow-up to their report covering the three previous years. Using data provided by the Chamber and several local economic development associations, this most recent assessment estimated the impact of the economic development projects announced for 2016 through June 2018 on economic output, payroll, and tax generation, in addition to direct and multiplier effects such as spending in other industries, for the Alabama counties of Limestone, Madison, Morgan, Marshall, and Jackson, and the Tennessee county of Lincoln.

The process, which took about six months, began with Thompson gathering the relevant inputs – both those related to the economic development announcements for the region over the past two years. The data are then entered into IMPLAN®, a proprietary model utilized by Dr. Mahalingam to conduct a multi-regional input output analysis.

After that, says Thompson, "we go through the results with the customer to make sure everything is categorized properly. We’re constantly asking ourselves, did we do this? Did we think about this?" And according to Dr. Mahalingam, that’s where the pair’s real strengths come into play. "That’s the nice part of our relationship," she says. "We are in totally different fields, so we see the data differently." No matter what angle they’re coming from, however, they both insist that their respective contributions are free from prejudice.

"As a university, we are not biased toward our clients," says Dr. Mahalingam. "We’re more independent." Thompson agrees. "We don’t do predictions, we don’t do forecasts, and we don’t work toward numbers," he says. "What we say is that, if you give us the level of investment and employment in these sectors, we will tell you the potential impact on the community. We don’t change the numbers or tweak them for a target."

All of which means that the report is less of a crystal ball and more of an estimate of what might come to be in terms of economic development for the community. "It’s calculating potential," says Thompson. And even then, he adds, these types of reports have "a short shelf life" depending on how closely the implementation in reality matches the estimate. Fortunately, both Thompson and Dr. Mahalingam are ready and willing the next time the Chamber comes calling. "We keep in touch with our clients," she says, "and tell them it’s easier to update reports than start from scratch!"