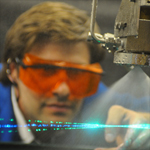 HUNTSVILLE, Ala. — The Propulsion Research Center at The University of Alabama in Huntsville has again been featured as one of the top laboratories in the nation by Popular Science magazine.

In the magazine’s feature, “Labs that go boom,” the PRC is credited as building a better rocket and being a home base for some of tomorrow’s great rocket sciences.

The September edition includes a feature on the future of education. The magazine featured 10 laboratories across the nation where students do serious research and career training by “blowing stuff up.”

It lists possible careers for graduates, such as rocket scientist, aircraft designer or missile systems engineer.

Popular Science cites the laboratory’s strategic location a few miles from NASA’s Marshall Space Flight Center, saying “the Propulsion Research Center has been a proving ground for some of the world’s top rocket scientists since its inception in 1991.”

In addition to making rockets that launch payloads into orbit, says interim director Robert Frederick, students will soon begin work on new nuclear propulsion systems that could reach Mars in weeks instead of months.

The Propulsion Research Center was named the third “Most Awesome Lab in 2011” by Popular Science as part of its “Best Places to Pursue Science” feature.

In 2010, Popular Science also named the PRC as having one of the coolest college courses in the nation.

See the link below.