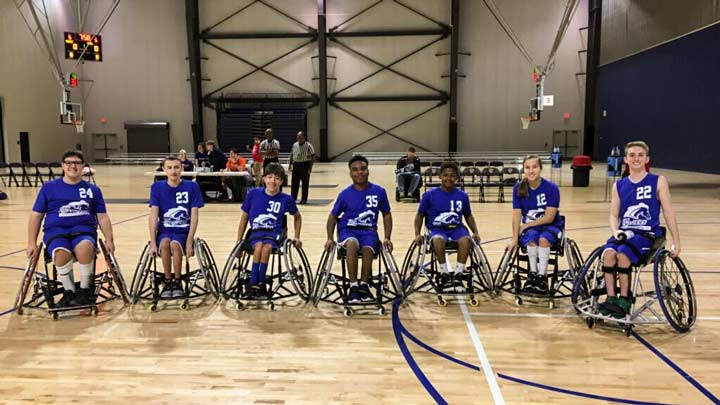 The junior varsity wheelchair basketball team at The University of Alabama in Huntsville (UAH) has received a coveted invitation to play in the 2017 National Wheelchair Basketball Tournament in Louisville, Ky., March 30-April 2. The honor is a huge one for the first-year team, which also took fourth place in the 2017 NWBA Southeastern Junior Division Conference Championship in early March.

The team itself is a member of UAH’s Ability Sport Network, an adapted youth sport league focusing on Paralympic sports and intended for middle and high school students with functional limitations based on physical disabilities. The ASN currently offers leagues in wheelchair basketball and Boccia, a "bowling" game involving strategy and accuracy that is played sitting down in a wheelchair or regular chair.

"I am excited about this opportunity and the positive impact it will have on our athletes. They have worked hard all season to make this happen," says ASN director David Kyle, a Kinesiology Department lecturer and former Paratriathlon world champion. "We hope the community will come out and cheer for the Chargers at the tournament, but more importantly, we want to let other potential athletes know about the ASN and encourage them to join us for next season."