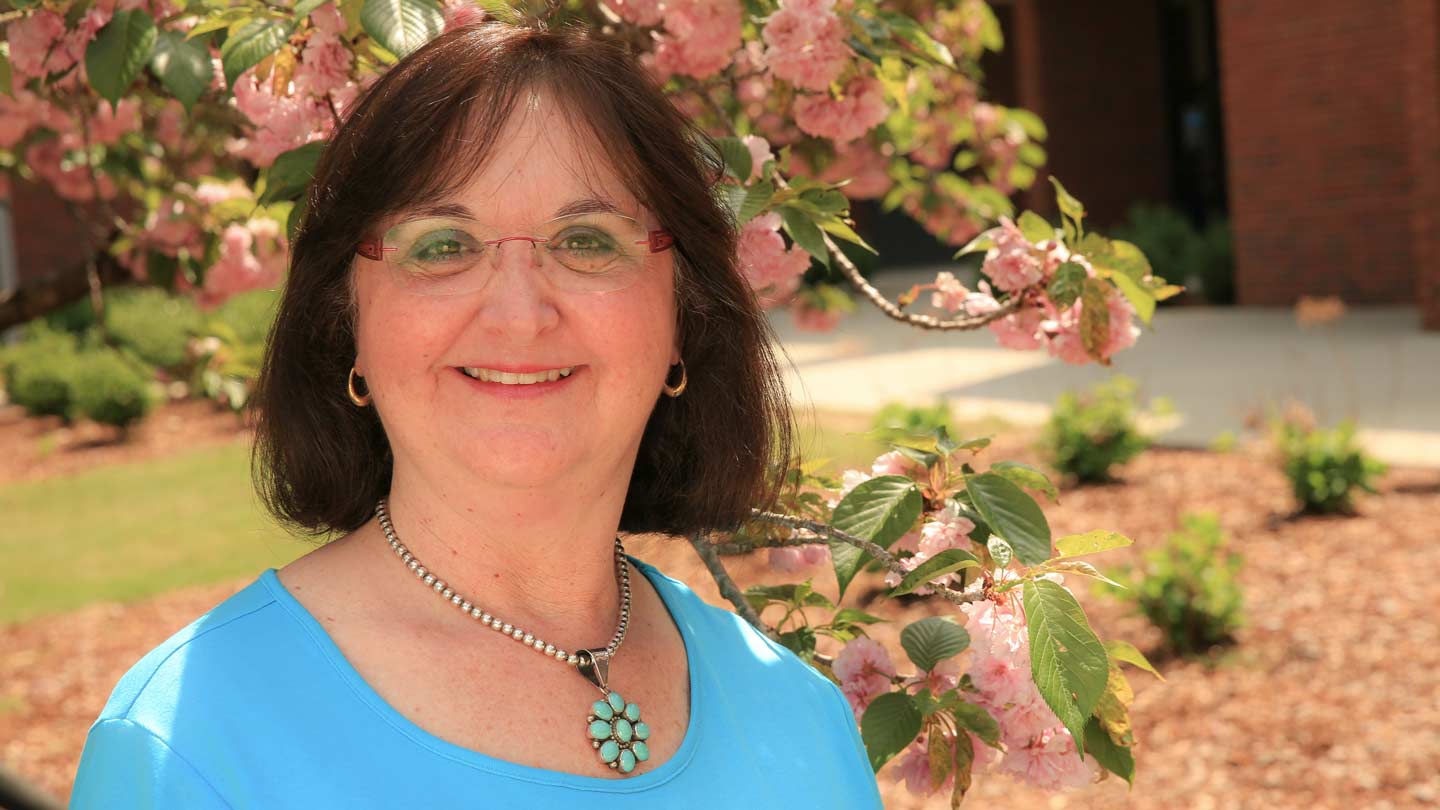 Cecille "Cil" Spina officially retires from the UAH Music Department on April 28. In the last fifty years, Spina and one other administrative assistant, Bess Smith, worked in the department.

No matter how you look at it, an event that happens only twice in five decades is historically significant.

In the last fifty years only two office assistants have worked in The University of Alabama in Huntsville (UAH) Department of Music. Cecille "Cil" Spina began working in the department in 1997, and her predecessor, Bess Smith arrived in the late 60s. Spina will officially retire at the end of the month.

"UAH, especially the Music Department, is a wonderful place to work," Spina said. "Bess Smith and I have been the only two administrative assistants for the department, so that should say a lot!"

During the first few years, Spina worked as a Staff Assistant under the direction of Dr. David Graves. She now serves as Senior Staff Assistant to Dr. C. David Ragsdale, Chair of the Music Department.

"When I started at UAH the computer platform was SIS – a good system which required an overnight download to update any changes. The university then went to Banner and the best part of the program was Native Banner – which immediately updated any changes. This has been particularly helpful when registering students for classes," Spina said. "But, for many years the ‘workhorse’ of the department and the university was the IBM Selectric II."

Spina said before administrative assistants were blessed with desk top computers and printers, all contracts, part-time faculty hires, change orders and other business forms had to be typed. "Of course, the Selectric II was a huge, extremely heavy machine so once in place it tended to stay put, no matter how little room there was on the desk. It went the way of the Woolly Mammoth, however, when the university put all forms online. In 2011 our department bought a copier/printer that had a scan-to-email function – an absolute necessity which makes me wonder how we managed all these years without that capability."

In January 2001, the Music Department and entire university were deeply shocked when David Graves passed away. "It was a devastating blow," said Spina. "On the first day of the semester, he sent an email wishing everyone a great semester and expressed how much he wanted to be there for the start of the semester. He passed away two weeks later…it was an extremely difficult time as a cloud of uncertainty and despair descended over the department. Graves served as chair of the Music Department for 19 years.

Spina's work with Graves on academic matters and preparing paperwork for music's first pre-accreditation review proved invaluable to the department after his death. "I became quite knowledgeable of our program and was able to advise students on needed coursework and other academic snags…most of the students just needed a shoulder to cry on," she said.

To this day, Spina is still very involved with assisting the university's music majors. "The favorite part of my job is working with our students," she said. "I know all of our majors very well since I register them for classes, prepare their recital programs, and advise them on their programs of study. Working directly with the students will really keep you young." The help is reciprocal, too, Spina adds. "Most of our students have been working with electronics since they were barely able to hold a device, I am so happy when one of them asks if they can show me something new."

Limited in the beginning, Spina's duties and responsibilities have morphed over the years. Dr. D. Royce Boyer, who started the university's Music Department in 1966, is still active and was instrumental in planning the department's 50th anniversary events. "Dr. Boyer felt that the Wind and Jazz Ensembles didn’t have the opportunity to perform a concert in a professional venue as often as smaller ensembles so he donated funds to rent the Von Braun Center. The concert was a success and planted the seed for our annual event, the Peace on Earth (PoE) concert," she explained. "PoE is held on the first Friday in December. The concert has become the signature event for the College of Arts, Humanities and Social Sciences."

In addition, Spina said, there are certain times of the year the department hosts concerts nearly every night. "As a result you spend more waking hours at work than you do at home, so your work partners become your second family. We are especially close in the Music Department and know each others’ spouses, children, and sometimes parents. My office is an open-door, so if people see me sitting at my desk they will stop in and chat," Spina said. "Frequently, I will have a student ask ‘are you busy?' I laugh and say I’m always busy, but anyone is welcome to stop by the office."

With nearly 25 years of employment on the shelf, Spina has countless humorous stories she could share with the university community. One story easily comes to mind. Her old office was a small cramped room (on the second story side of Roberts Hall) directly across the hall was a small closet that contained a utility sink. "During my lunch break I took voice lessons with Charlotte Regni, who lived on a farm. One day Charlotte had to bring a baby fainting goat with her to bottle feed. She asked Spina to hold the "baby" while she went to her car to get a bottle. While Spina was holding the baby goat, nature called. She handed the "baby" back to Charlotte and proceeded to clean her blouse in the utility sink. "As I stepped out in a completely soak blouse Dr. Graves asked 'what happened'? I mumbled, the goat…but before I could finish the sentence he shook his head, started walking away and said, 'I don't want to know anymore'."

Spina will certainly be a hard act to follow for the third administrative assistant who occupies the main office in the Department of Music. She freely offers some coping advice: "be a good listener, be flexible, and know that ‘this, too, shall pass'. There are many demands…things over which you have absolutely no control, so just ‘go with the flow.

"It isn’t farewell when I retire – I’ve already told everyone I’m available for lunch or dinner any time! And I will see them at concerts — you don’t just give that up after it has been a part of your life and entertainment for so long."