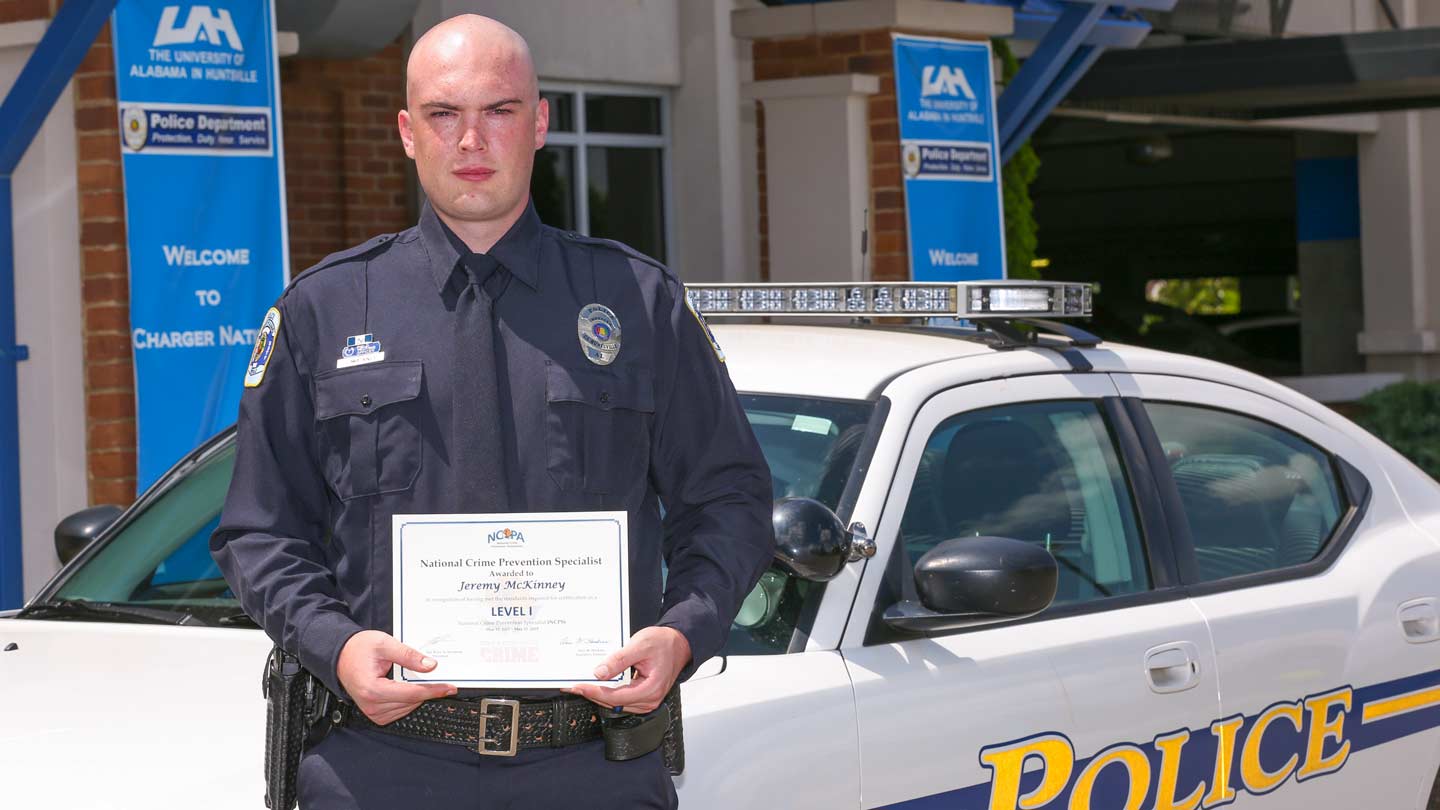 As a newly certified National Crime Prevention Specialist (NCPS), Officer Jeremy McKinney's situational awareness is now more heightened than ever. Which is why it makes him a little nervous that his wife works for a hotel. "I've learned they're not the most secure place in the world, since it's hard to tell if a person does or doesn't belong there," he says. "So the more I learn about crime prevention, the more she has to hear about it at night!"

Officer McKinney, a member of The University of Alabama in Huntsville (UAH) Police Department, first began pursuing certification in 2013 as part of the department's continuing education requirement. "We have to take 12 hours of training a year to stay certified as police officers," he says. "Since we all have what we like to do, we try to find training classes in that general area."

Thus with no one else in the department focusing on crime prevention at the time, Officer McKinney opted to take an introductory class at Vanderbilt University. "It was local and it caught my eye," he says. It also proved to be unexpectedly enlightening. "I knew really absolutely nothing when I started. We try to be proactive as police officers, but a lot of times we end up being reactive," he says. "It was definitely an eye-opener."

You don’t have to be paranoid, but you can take steps to increase your odds of safety, to never be a victim of crimes.

Crime prevention isn't a new concept, of course. But recently it has gained national attention as a more effective - and cost-effective - method of reducing crime. Techniques can be passive or active, and can include everything from improving lighting in parking lots, trimming back shrubbery, and increasing police patrols to educating the public about steps they themselves can take to improve their safety.

The latter is Officer McKinney's objective. Now that he is certified, he says, "I have a higher priority to teach the students the information I've learned so far, as well as the faculty and staff." This fall, he plans implement the "Refuse to be a Victim" program on campus to complement the UAHPD's "Rape Aggression Defense" class. He also hopes to expand Charger Watch, an initiative that's modeled on a traditional neighborhood watch but with student volunteers.

"For the most part, we have a safe campus, but crime can happen anywhere," he says. And it's more likely to happen when people aren't paying attention to their surroundings. "People walk down the road texting or talking on the phone, or they'll approach their car from the back where they can't see around the side," he says. "These things are minor but they're critical. They're an opportunity for crime to happen."

That same level of awareness is just as important when it comes to online activities, which open users up to fraud, viruses, identity theft, and more. "With social media, for example, a lot of students just think because they have their profile set to private, no one can see their posts," he says. "But it's really easy to hack into those sites. Criminals can see your geocode and know if you're posting from somewhere else."

Already, Officer McKinney has made changes to his own behavior based on what he's learned through his training. "I'm from the country and you could leave your front door or your car unlocked," says the Greenbrier, Ala., native. "But now, I definitely lock my car doors! I also figure out who's on the other side of the front door before I unlock it. And pictures of my kids aren't posted on social media as much as they used to be."

No doubt he will learn even more tips as he works toward his next goal: Level II NCPS certification. In the meantime, Officer McKinney offers students, community members, and his wife the following advice. "Lock your doors, pay attention to your surroundings, and be careful what you post on social media," he says. "You don't have to be paranoid, but you can take steps to increase your odds of safety, to never be a victim of crimes."