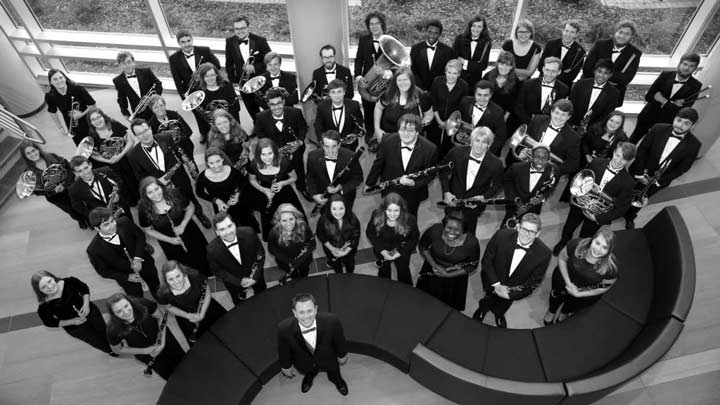 The U.S. AMC Band and the UAH Wind Ensemble will unite for a final performance at 7:30 p.m., on Friday, April 20, at the Von Braun Center.

The University of Alabama in Huntsville (UAH) Wind Ensemble and the U.S. Army Materiel Command (AMC) Band on Redstone will unite for a final performance on Friday, April 20.

Marsalis will conduct a 10 a.m. masterclass the same day on the UAH campus in Roberts Recital Hall for trumpet players and brass musicians from across the region. The class is free and open to the public.

"Since their arrival in Huntsville, the AMC Band has presented thousands of performances for our community, partnered with our public and private school music programs, and instilled a sense of patriotism and pride in our citizens of Huntsville," said Dr. C. David Ragsdale, UAH Music Chair and Director of Bands. "UAH is honored to have joined forces with them on numerous occasions and will long cherish the opportunities and experiences they’ve provided our students of music over the years. Likewise, we look forward with great anticipation - and some sadness - to partnering with the AMC Band and their wonderful Commander Bettencourt one final time to present an outstanding program of American music.

"Andy Hudson, virtuosic clarinetist, is one of the most dynamic musicians I have ever known. We look forward to performing the dizzying Black Dog clarinet concerto with him based on themes of the rock tune by the same name. The combination of this full-throttle concerto and Andy’s red-hot playing is not to be missed," added Ragsdale.

"The AMC Band is very excited about the opportunity to perform with the UAH Wind Ensemble," said AMC Band Commander James Bettencourt. "As you may know, restructuring is leading to the Army inactivating the AMC Band. We have enjoyed the Huntsville area and serving the Tennessee Valley during our tenure. Army music has always partnered with centers of education and we thank Dr. David Ragsdale for another exciting chance to perform with his world-class ensemble.

"Among the distinguished guest artists, will be a world renowned trumpet player, Rodney Marsalis to solo with the combined ensemble. Mr. Marsalis will provide a brass master class before the concert. We have greatly enjoyed the support of this incredible community and UAH as the AMC soldiers prepare for their next assignment," Bettencourt said.

The sound of Marsalis's trumpet has reverberated throughout the world. His artistry has been enthusiastically enjoyed in the U. S. and in such countries as France, Spain, Germany, England, Greece, Rumania, Japan, Taiwan, and Korea.

A graduate of the Curtis Institute of Music, Marsalis has worked under the guidance of world-renowned conductors such as Leonard Bernstein, Michael Tilson Thomas, and Gerard Schwarz.

Marsalis was born in New Orleans, LA, where he began his musical studies at the age of six. When he was 11 years old, he began taking classical lessons with his cousin, the famous trumpet player, Wynton Marsalis. Referred to as a "trumpet prodigy" his solo debut was at the age of 15 with the New Orleans Symphony. After having won various solo competitions, he received national attention at the age of 19 performing as soloist with the Boston Pops Orchestra. Marsalis has also performed as soloist with the San Diego Symphony, the Tenerife Symphony, the Orquestra Sinfonica de Barcelona i Nacional de Catalunya, The Chamber Orchestra of Philadelphia and many orchestras throughout the United States and Europe.

His debut solo trumpet CD "Spirit of the Trumpeter" is considered a best seller. Marsalis’ year is split between his duties as Principal Trumpet with Chamber Orchestra of Philadelphia and various master class and solo engagements in the United States and abroad.

A frequent soloist, Hudson recently performed the concerti of Weber, Gandolfi, Daugherty, and Mozart among others. Several of his performances have been broadcast on WFMT Chicago, including his 2011 performance of Scott McAllister’s "Black Dog" as soloist with the Northwestern University Symphonic Wind Ensemble.

Hudson has performed with the Chicago Symphony Orchestra on their MusicNOW series, with Ensemble Dal Niente, and at the New Music Gathering, the Art Institute of Chicago, the Eastman School of Music, and Constellation Chicago.

He is currently a lecturer in Music at Lake Forest College and an instructor at Northwestern University, and each summer he joins the Artist-Faculty of the Tennessee Valley Music Festival in Huntsville, AL. Hudson is a current DMA candidate at Northwestern University, where he also earned his Master of Music degree. He previously earned his Bachelor of Music degree from Columbus State University.

Come enjoy the music and say "thank you" to the AMC Band for their years of service to the North Alabama community.

***EDITOR’S NOTE: The AMC Band's final performance as a full ensemble will be during Armed Forces Week, on Tuesday, June 26.