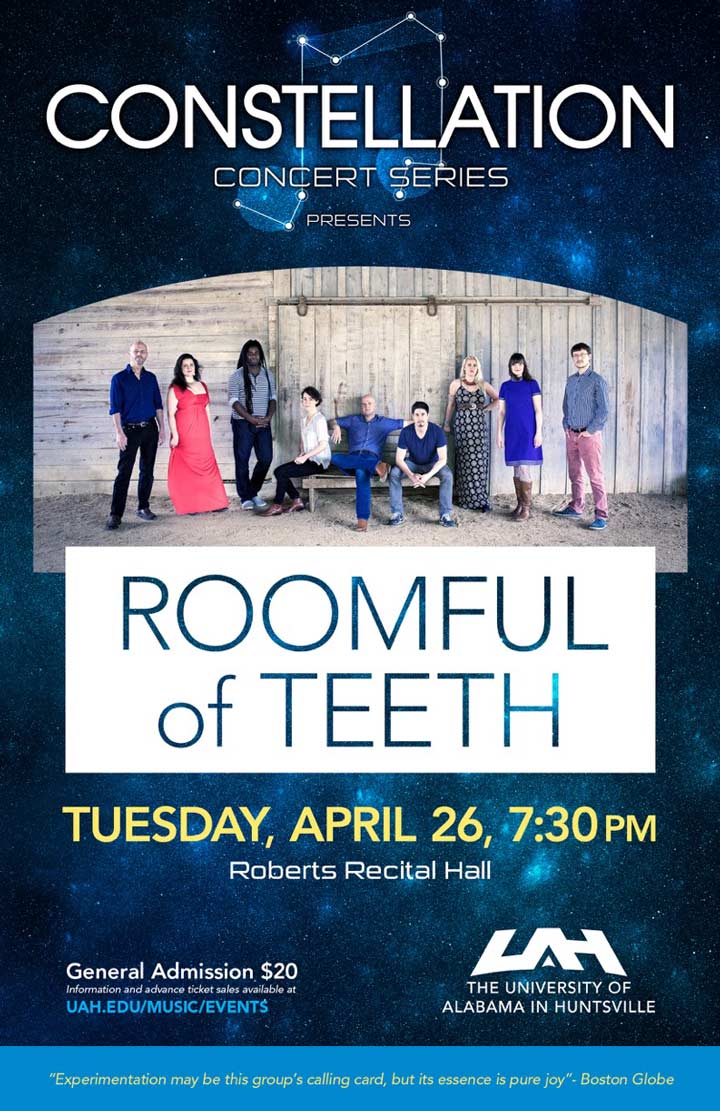 The Department of Music at The University of Alabama in Huntsville (UAH) will host a performance by Grammy® Award winning vocal ensemble Roomful of Teeth at Roberts Recital Hall on Tuesday, April 26, from 7:30-9 p.m. The event is part of the Department's yearlong Constellation Concert Series, whose 2015-2016 season also included the Grammy Award winning Los Angeles Guitar Quartet.

"We are absolutely thrilled to welcome Roomful of Teeth to Roberts Recital Hall. It is the perfect venue for this revolutionary vocal ensemble," says Dr. Aaron Cain, UAH assistant professor of voice. "By combining years of classical training with dozens of extended vocal techniques from around the world, the members of this octet have created a style of music that is entirely their own. They possess all the color and lyricism of an orchestra, the moving intimacy and flexibility of the human voice, and the audacious wallop of a heavy-metal rock band. Huntsville has never heard a group quite like this."

Formed in 2009 by conductor, singer, and composer Brad Wells, Roomful of Teeth has gone on to study and perform a wide variety of genres, resulting in the broad repertoire of performances that fans have come to expect. They have gathered annually at the Massachusetts Museum of Contemporary Art since their formation to train in various vocal arts, with past studies including Inuit throat singing, yodeling, and Persian classical singing. They have also collaborated with some of the world's best musical artists, including composers Merrill Garbus of the music project tUnE-yArDs, and Grammy® Award winner Rinde Eckert. Purchase tickets at eventbrite.com >>