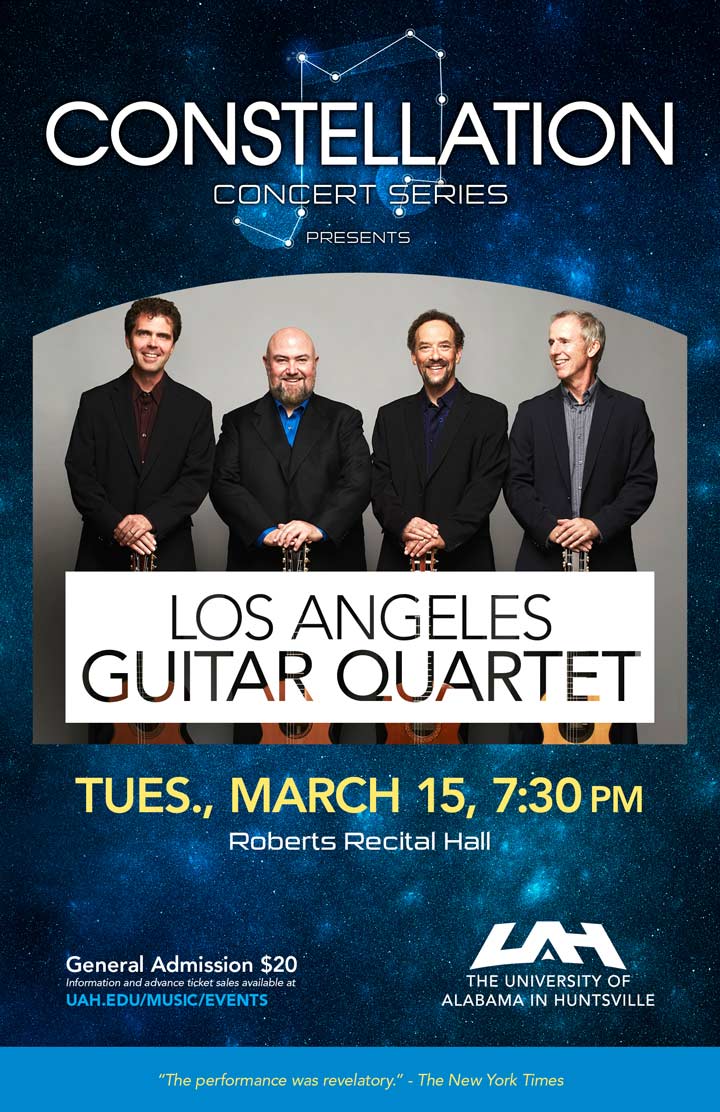 The Department of Music at The University of Alabama in Huntsville (UAH) will welcome the Los Angeles Guitar Quartet (LAGQ) to Roberts Recital Hall for a special performance on Tuesday, March 15, at 7:30 p.m. The event is part of the Department's yearlong Constellation Concert Series, whose 2015-2016 season will conclude on April 26 with vocal performers Roomful of Teeth.

"LAGQ tours internationally and is a consistent box office draw, so the UAH performance is a rare chance to see them in an intimate venue," says Phil Weaver, a UAH lecturer and guitarist who performed during last year's series. "Audience members will be dazzled by their virtuosity and how seamlessly four musicians can play as one - and you don't have to be a classical music aficionado to enjoy the show! Their programming is wide-ranging and accessible."

LAGQ was formed in 1980 at the University of Southern California's Thornton School of Music and comprises guitarists John Dearman, Matthew Greif, William Kanengiser, and Scott Tennant. In addition to sold-out performances both nationally and abroad, the quartet has collaborated with the likes of vocalist Luciana Souza and actor Philip Proctor. Their hard work has not gone unnoticed; the quartet's "Guitar Heroes" was the winner of a 2005 Grammy ® Award, while their "LAGQ-Latin" earned a Grammy nomination the year before.

In addition to their UAH performance, the quartet will be providing instruction for area guitar students in a master class to be hosted by the Department of Music from 4 to 5 p.m. on March 16.