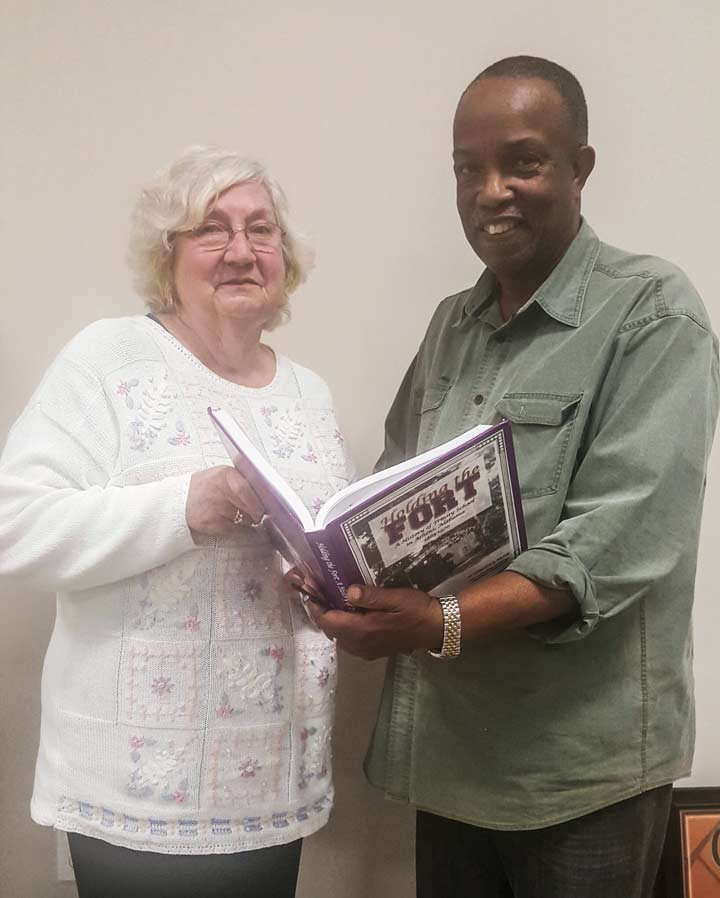 UAH alumna Charlotte S. Fulton ('69 BA English) and local actor Frank Travis prepare for the play Arise and Build. The performance is based on Fulton's best-selling book, "Holding the Fort." The play will run Feb. 3-5 in Athens.

For more than 100 years Trinity High School in Limestone County AL, was the only school in the county where African-American students could get an education. The beloved high school closed in 1970 due to court-ordered desegregation. Charlotte S. Fulton ('69 BA English) acclaimed author and alumna of The University of Alabama in Huntsville (UAH) spent nearly six years researching and penning the historical book, Holding the Fort: A History of Trinity School in Athens, Alabama, but her interest in the subject dates back to 1991, when she was a feature writer for the local newspaper, The Athens News Courier.

On Tuesday, Feb. 21, at 3 p.m., in the UAH Louis Salmon Library room 111 (reception Art Gallery), Fulton will talk about her journey researching and compiling oral histories for the book. After her talk she will conduct a question and answer session. The event is co-sponsored by the UAH Office of Alumni Relations, Office of Diversity and Multicultural Affairs and the Louis Salmon Library. The event is free and open to the public.

Holding the Fort was published in 2014, and tells the story of educating generations of African-Americans in Athens and surrounding areas during the Civil War era through the Civil Rights Movement. Book sale profits go toward the operation of the Pincham-Lincoln Center, renovated from the extant portions of Trinity School.

"The high point of my Athens News Courier experience was the Trinity Profiles series I initiated, featuring former students and teachers from Trinity School, which from its establishment in 1865 by the American Missionary Association until its closure in 1970, was the only high school for African-Americans in Limestone County," Fulton said. "Having attended all-white schools in the era of segregation and begun my teaching career during desegregation, I had developed an interest in that aspect of our nation’s history. Now I could gain a new perspective by interviewing people whose careers as students and teachers in all-black schools had bridged these two eras."

Born in the Madison County community of Big Cove, Fulton was the youngest of 10 children. When she wasn’t "picking cotton or gathering tomatoes or cutting corn off the cob, I was reading." Reading and writing were two of her favorite pastimes.

For Fulton, going away to college wasn't an option. She had no money for tuition and no transportation. "Fortunately, I was within commuting distance of UAH, where two of my brothers had gone before me — the oldest one of them attending classes at the fledgling institution, then known as the University Center, when classes were being held in the old Butler High School. I majored in English with certification in secondary education, honing my writing skills under memorable English teachers such as Eleanor Hutchens, Carter Martin, Jo Ann Harrison, Herb Francis, and Robert Welker."

Fulton graduated from UAH in the spring of 1969 and began teaching junior high school English at Hazel Green High School. "I had attended an all-white high school in the era of segregation and had seen UAH peacefully integrated by a handful of African-American students during my time there. Integration in Alabama’s public schools had begun gradually in the 1965-1966 school year under the Freedom of Choice Plan."

Full integration, Fulton said, began with the 1970-1971 year, and as a young teacher she transferred to West Madison Jr. High, a previously all-black school. "I spent the next few years teaching in Madison County schools (Madison Jr. High and Bob Jones High) before taking time off to rear two sons." Her husband Bruce Fulton ('75 BS Engineering) graduated from UAH as well.

The family moved to Athens in 1970, and Fulton renewed her teaching certificate, at Athens College (now Athens State University). Intending to return to the classroom, Fulton "got diverted" when a class in journalism reignited her love for writing.

In 1990, Fulton went to work at the News Courier, and launched a new career as a feature writer. For the next 15 years she interviewed Limestone Countians on a wide range of subjects. Fulton garnered several Associated Press and Alabama Press Association awards. Also Fulton and Kelly Kazek co-wrote Etched in Limestone, a two-volume pictorial history of Limestone County, Alabama.

Fulton began the monumental task of conducting oral histories in 1991. Trinity Profiles, she said, began with a history of the school and continued with stories about former Trinity students. Trinity alumni include: The Honorable Judge Robert Eugene Pincham, a noted civil rights attorney and appellate court judge in Chicago; Dr. C. Eric Lincoln, scholar, theologian and college professor who wrote more than 20 books; Charles Tisdale, owner and publisher of The Jackson Advocate, a black newspaper in Jackson, MS; George Ruffin Bridgeforth, who became head of the Department of Agriculture at Tuskegee Institute during the tenures of Booker T. Washington and George Washington Carver, and Patti J. Malone, born into slavery in Athens, was a mezzo-soprano vocalist with the world-renowned Fisk Jubilee Singers.

Fulton said she found the interviewees to be "exceptionally articulate, exceptionally successful, exceptionally public service-minded – and exceptionally loyal to Trinity. Each person I interviewed told me about someone else. My list of Trinity Profiles grew longer and longer, and I became more and more intrigued about what made this school so special. I always intended to write a book about Trinity, so when, after retiring in 2006, I was approached about researching a book to be used as a fundraiser to help restore the old Trinity property, I said yes."

The school is located on the former site of Trinity-Fort Henderson, a Union breastworks fortification built in 1863 by slaves-turned-Union soldiers.

Fulton considers her six year journey of research and writing "eye-opening" as the picture emerged of white women missionaries who left their homes in the North, coming South to teach freedmen immediately after the Civil War. 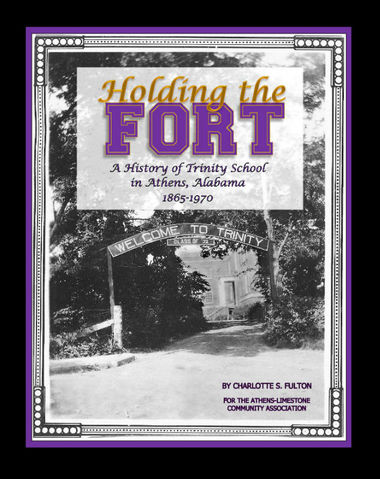 "It was a story of courage and sacrifice — on the part of teacher and student. Trinity’s founder Mary Fletcher Wells assembled her first classes just weeks after General Robert E. Lee surrendered at Appomattox, initially teaching under the guard of Union soldiers," Fulton said. "When the American Missionary Association (AMA) planned to close Trinity in 1879 and transfer Wells to another field, the people contracted with the AMA to make the brick themselves if the AMA would build another school and allow Wells to remain in Athens," Fulton added.

While difficult to imagine now, Fulton said by 1892, Trinity would have its first African-American teacher on staff. "She would be joined a few years later by others who had graduated from Fisk or Talladega and returned to teach at their alma mater. Just think: an integrated faculty in Athens, Alabama, in the 1800s. The tradition of success would continue throughout Trinity’s years of operation and beyond, with Trinity alumni filling the nation’s pulpits, leading its classrooms from kindergarten through college level, creating art and music, becoming entrepreneurs, and excelling in the military and other fields of endeavor," Fulton said.

In 2015, Fulton and actor Frank Travis co-wrote the play Arise and Build, based on Holding the Fort. Sponsored by the Athens-Limestone Community Association (ALCA), the play features some of Limestone County's most talented gospel singers. The play will be reprised this year, and performances will be held Feb. 3-5, at Friendship Church in Athens. For ticket information, please call 256.777.9727.