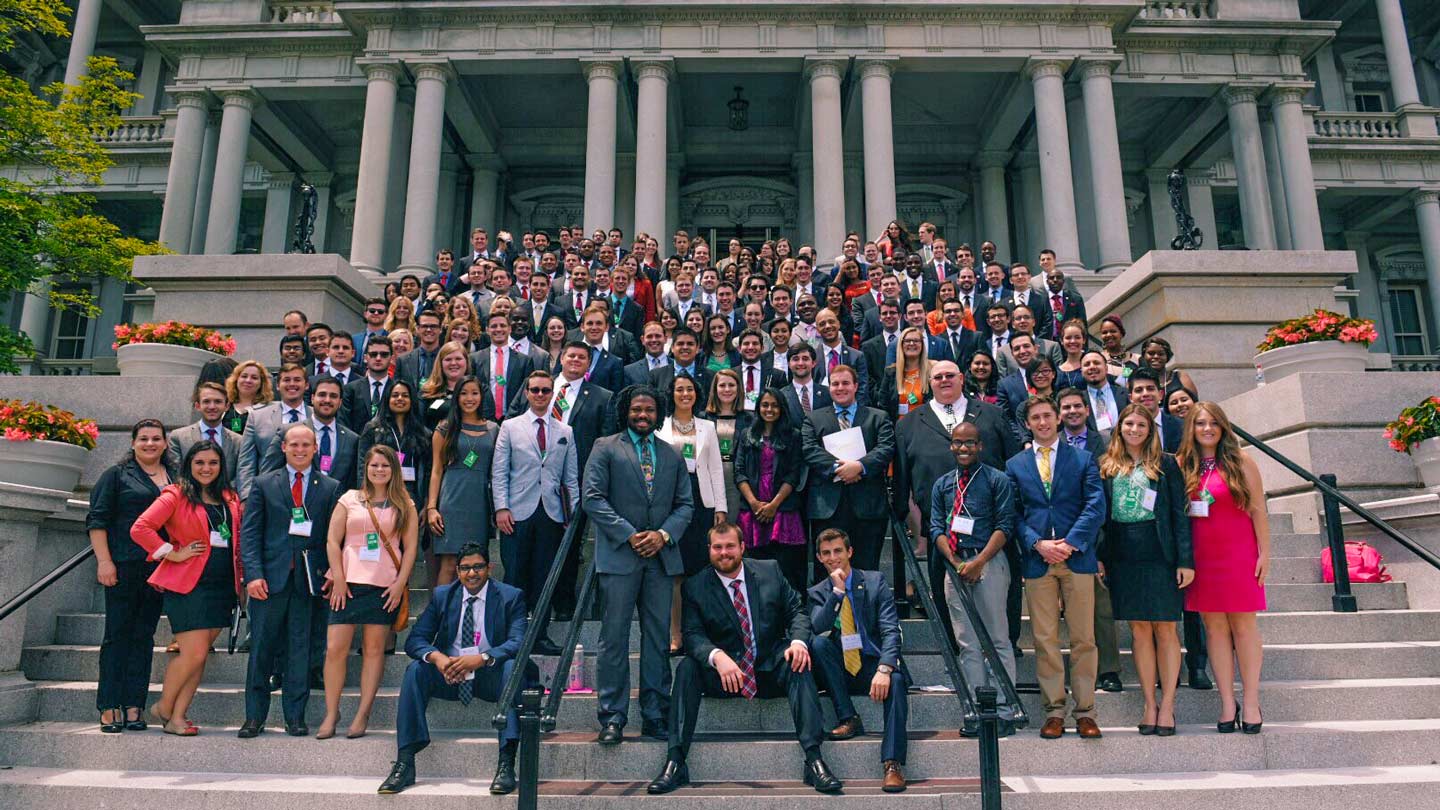 Incoming and outgoing student body presidents from 122 institutions took part in the NCLC’s Presidential Leadership Summit held May 30 to June 1 in Washington, D.C.

Austin Finley has only been president of the Student Government Association (SGA) at The University of Alabama in Huntsville (UAH) since April. But after attending last month's Presidential Leadership Summit in Washington, D.C., he's already got plenty of ideas for what he'd like to do during his term in office.

"The conference brought together all the student body presidents from across the country to have a conversation about issues facing college campuses today," says Finley, a senior aerospace engineering major. "Mental health, financial aid, environmental sustainability, sexual assault prevention - every topic you could think of we addressed."

Both Finley and outgoing SGA president Nandish Dayal attended the three-day event, which was hosted by the National Campus Leadership Council (NCLC). The agenda included breakout sessions and workshops, a White House policy briefing and working lunch, and a workforce readiness panel discussion at the U.S. Chamber of Commerce.

"This was the biggest summit we've hosted, with more than 150 incoming and outgoing student body presidents joining us from 122 institutions," says Andy MacCracken, Executive Director of the NCLC. "The student leaders came together to collaborate on some incredibly vexing issues, and the whole community left with invaluable insights on how to move forward." 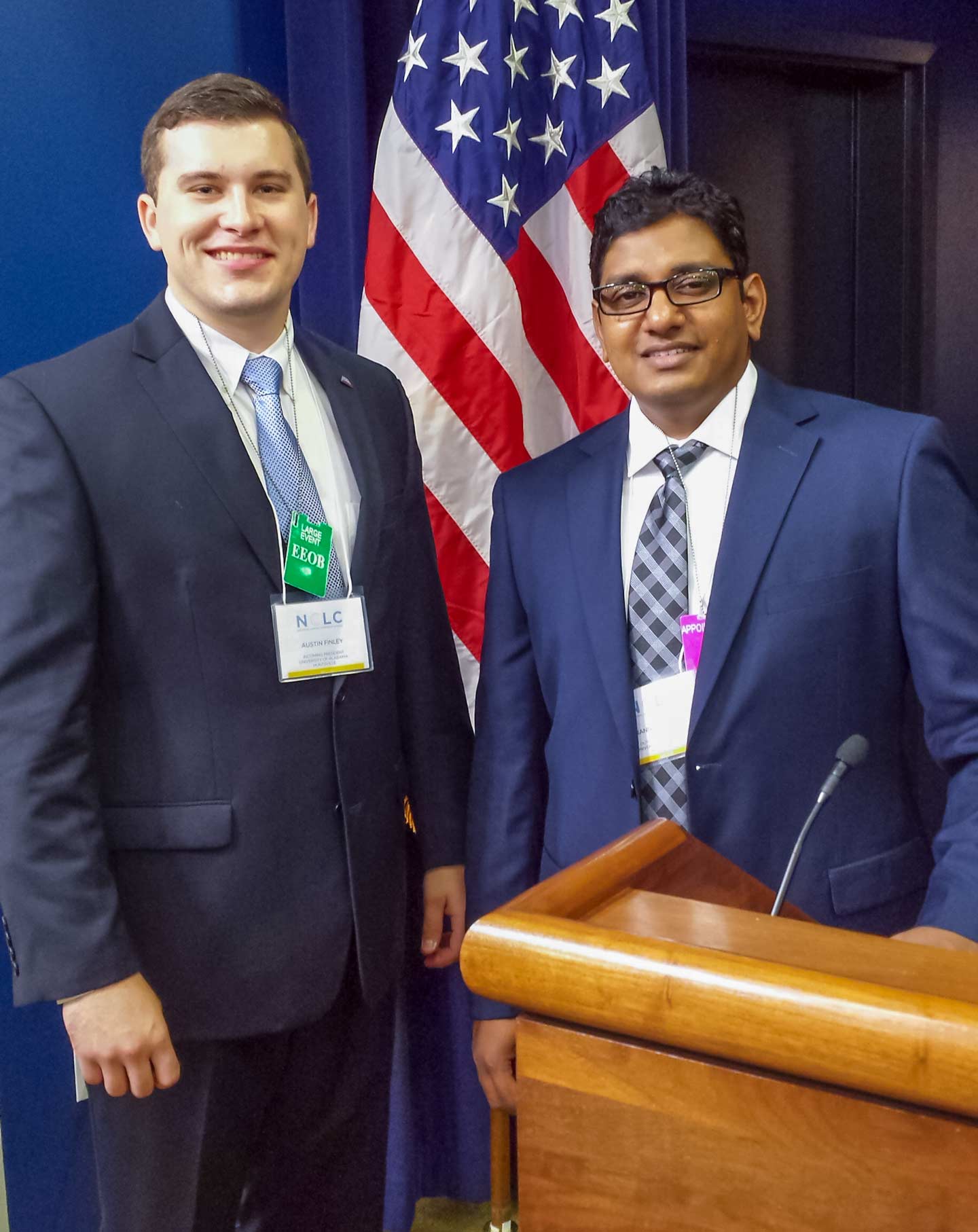 Dayal, who graduated this past summer with his bachelor of science in nursing, says it was also "a great opportunity" for Finley to gain a broader and more nuanced understanding of the issues he will face as the SGA's next president. "At UAH, we usually focus on things at the regional or state level, but this gave Austin the chance to see them at the national level - and the chance to represent UAH at that level as well."

Indeed, both Finley and Dayal were able to share their experience with the rollout of the "It's On Us" campaign, a White House-led initiative to reduce sexual assault on college campuses. "Some schools - big schools - have only just started the conversation, whereas we've been onboard since day one," says Finley. "So we were able to help lead that discussion and be on equal footing with these prestigious institutions."

They were also able to see how effective student leaders can be, and the change they can bring about, when they have the opportunity to advocate collectively. "During the White House briefing, the experts who were moderating were listening to us and taking notes," says Dayal. "They also shared with us what they'd done after listening to us over this past year. To me, there was a feeling of acknowledgment."

Now, of course, the challenge is to take everything they learned in DC and put it into practice here at home. As incoming president, that will primarily be Finley's job, though he knows he can't do it alone. "Right now it's been me by myself for the summer," he says. "So my job is to get the executive board and the committee members up to date on their areas, so that they can function without my telling them what they have to do."

That job will get tougher as the momentum of the conference wears off and the realities of juggling SGA responsibilities and a full course load set in. But Finley isn't too concerned. "I am passionate about it and I love putting time into it," he says. "I would do it without any kind of reward." He also believes it's important for him, and for every UAH student, to leave something behind.

"I want to change that mentality of people who just want to come and get their degree," he says. "What about your four-year college experience here?" And while he has yet to fully map out his own legacy as SGA president, he knows a big part of it will be redefining student life on campus. "Let's not be content where we're at," he says. "UAH is already a great institution. Let's elevate it to an exceptional one."