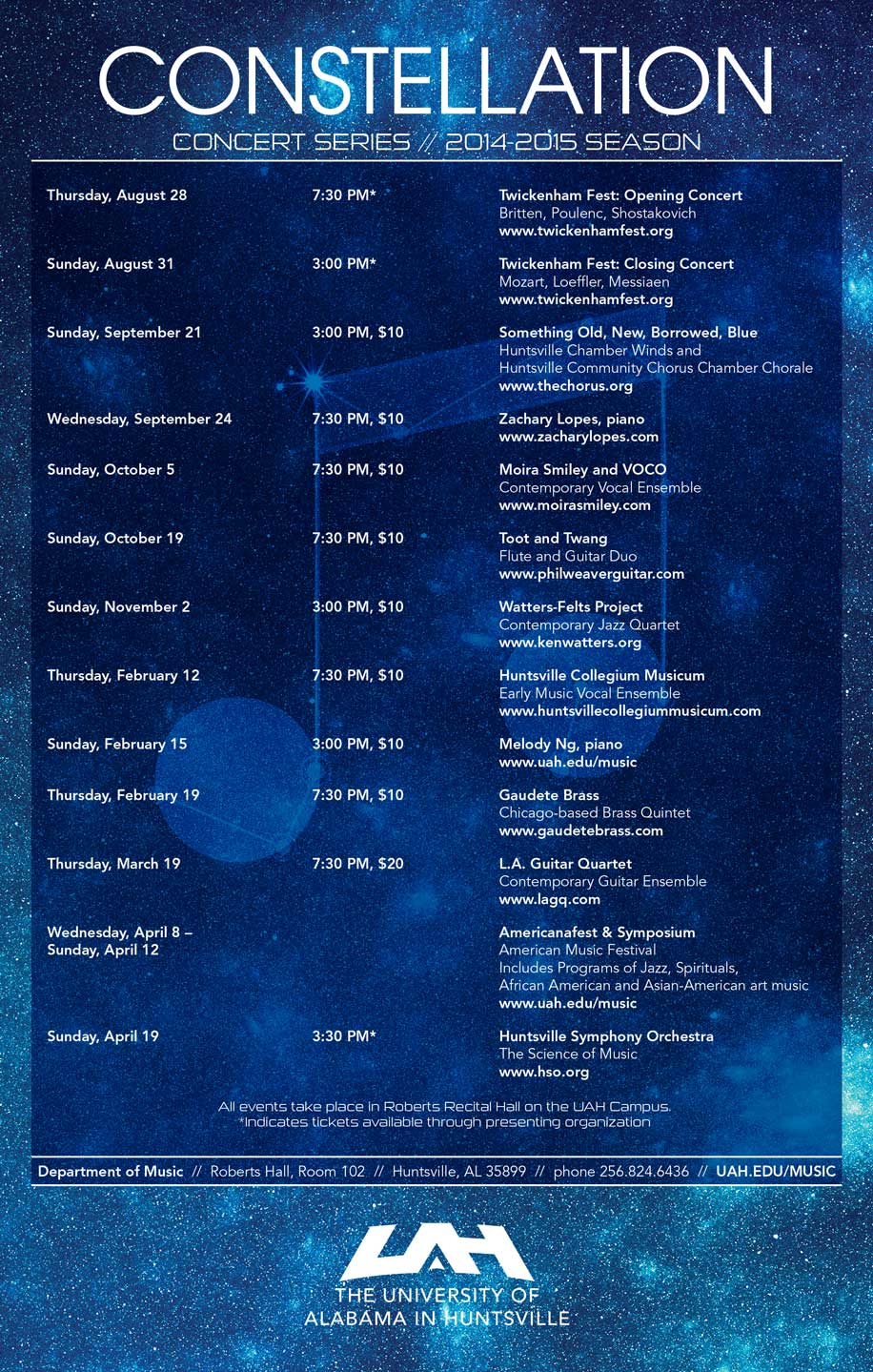 Over the next eight months, the Constellation Concert Series at UAH will showcase the talents of a dozen world-class performers in the campus' newly renovated Roberts Recital Hall, culminating in a week-long music festival celebrating the many facets and ever-changing nature of music by American composers.

"This series will bring diverse musical performers from around the country to our university to accelerate the growth of the valued culture of music performance in the Huntsville area," says Dr. David Ragsdale, Chair of UAH's Department of Music. "In addition, the musical offerings within the series were chosen specifically to underscore the stunning beauty and acoustic versatility of the new Roberts Recital Hall."

The next performance, "Something Old, New, Borrowed, Blue," will take place on Sunday, Sept. 21, at 3 p.m. and will feature the Huntsville Chamber Wings and Huntsville Community Chorus Chamber Chorale. "This program promises to be a delightful sampling of chamber music featuring Mozart's exquisite Serenade in E-flat Major," says Dr. Ragsdale, adding that soprano Karen Young will also sing Steve Danyew's Alcott Songs based on the poetry of Louisa May Alcott.

And that's not all. "The Chamber Chorale's first selection is Mendelssohn's lovely Verleih uns Frieden, a song about peace that will find the singers accompanied by several members of the Winds," says Billy Orton, Artistic Director of the Huntsville Community Chorus Association and one of the Chamber Chorale's conductors. Other selections to be sung by the Chamber Chorale include This Marriage, by noted composer Eric Whitacre; Haec Dies, an energetic composition that features accompanist Eric Wilson; and the world premiere of If Music Be, by local composer Lori Larson.

A few days later, on Wednesday, Sept. 24, award-winning pianist Zachary Lopes will take the recital hall stage for a solo performance. "I'll be playing works by Rameau, Beethoven, Villa-Lobos, Muczynski, and Kapustin," he says. "These composers are not as widely known, so it's a great opportunity to bring familiar and not-so-familiar music to the public, and to discuss the importance and value of the featured composers and their works."

For us, it’s another step forward in celebrating UAH’s unique role in the community as a purveyor and proponent of the best of the arts in Huntsville. We are confident that it will both increase Alabama’s role as an artistic focal point of the region and provide more direct interaction with the community through educational outreach.

"We are delighted to be part of this new series," says Weaver, who also directs UAH's guitar program as an adjunct assistant professor of music. "And the newly remodeled Roberts Recital Hall will be the perfect acoustic space to hear Rosa's gold Powell concert flute and my 1988 Jose Ramirez Elite classical guitar from Madrid."

The final concert of the year, but by no means the last of the series, will be a world-music-influenced jazz performance on Nov. 2 by the Watters/Felts Project. "It will mostly be music from our recently internationally released debut CD, but we'll also perform brand-new music," says Ken Watters. "We are entering our fourth year together as an ensemble, and we're very much looking forward to presenting our evolving collective voice to the community."

And that, says Dr. Ragsdale, is really the point of the whole series. "For us, it's another step forward in celebrating UAH's unique role in the community as a purveyor and proponent of the best of the arts in Huntsville. We are confident that it will both increase Alabama's role as an artistic focal point of the region and provide more direct interaction with the community through educational outreach."