HUNTSVILLE, Ala. (June 21, 2013) - This June, as with every June, over 120 first- through sixth-graders converged on the campus of The University of Alabama in Huntsville (UAH) to take part in the school's popular basketball day camp.

"The campers work on everything from basic dribbling skills to free-throw shooting, while also playing some 3-on-3 and 5-on-5," says K. Taylor Flatt, UAH's Sports Information Director. "They also divide into groups and take part in different contests throughout the week, with one crowned champion at the end."

Each group is assigned a counselor, typically a current UAH student or recent graduate, who not only works with the campers but also takes part in some of the week's contests. This year, counselor Ronnie Mack (right) is sure to have secured the MVP spot by winning the Camp Olympics - and a free pizza - for his team! 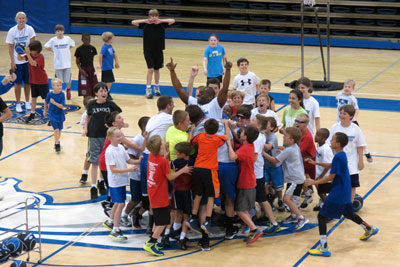 Camp counselor Ronnie Mack is swarmed by his team of campers after winning the Camp Olympics.